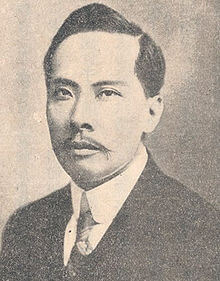 HF: Tse Tsan Tai, 謝纘泰,  16th May 1872 – 4th April 1938),  was one of the earliest Chinese revolutionaries of the late Qing Dynasty and co-founded the South China Morning Post. A man with a wide range of interests.

Tse Tsan Tai was born in Sydney, Australia on 16th May 1872 the son of Tse Yat Chong, a native of Kaiping County Guandong and leading merchant in Sydney. Tsan Tsan Tai stduied at Grafton High School, New South Wales until 1887, when he came to Hong Kong and attended Queen’s College.

In 1890 he joined the Public Works Department leaving in 1900 to become compradore of Boyd Kaye & a Co., an import-export firm.

In 1892 he married and had three sons and two daughters.

In the same year, along with several other young men, he established the Literary Society for the Development of Benevolence to promote reform in China. When Sun Yat Sen came to Hong Kong in 1894 Tse teamed up with him to form the Revive China Society and in 1895 thye organised the frist Canton uprising against the Manchu regime which failed. A second uprising in 1900 also collapsed. A succinct account, in English, of the political side to Tse Tsan Tai’s life can be found in the Elizabeth Sinn article shown in source one.

In 1898 he was on of the founders of the Chinese Club, the HK Chinese business community’s answer to their exclusion from whites-only clubs

The South China Morning Post (SCMP) was established in 1903, co-founded by Tse and  British newspaper man Alfred Cunningham, and first published on 6th November of that year. 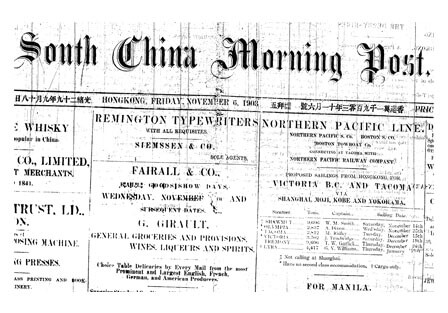 He left in 1907 to negotiate the cancellation of the 1904 Canton-Macao Railway Convention. He later worked in the compradore department of the American firm Shewan, Tomes and Co., and appeared frequently in shareholders’ meetings of companies in Hong Kong.

Tse was a man with however many interests besides merely undertaking a revolution in China. He was the first Chinese to design and fly an airship, the China, in 1899 and claimed to have solved the problem of aerial navigation by dirigibles. He was involved in techinical enterprises such as building railways, discovering petroleum sources and mining coal, limestone, marble and precious stones.

He operated an experimental farm on his estate Seeton, at Tsuen Wan, where he carried out mixed farming, ‘on the most modern lines to the great benefit of the district’.