York Lo: The Kings of Industries – the family behind Wearbest Garment in HK and Wha Mei Tobacco in old Shanghai 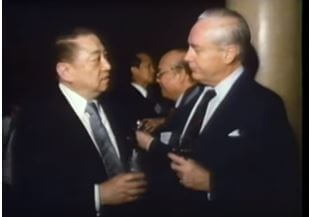 As profiled in many other articles in this group, Shanghainese industrialists played a crucial role in the post-WWII industrialization in HK in fields ranging from textile, plastic, enamelware, construction and many others. In the field of garments, Sieh-Ting King (金燮庭, 1922-1995, better known as S. T. King) built his Wearbest Garment Manufacturing Co Ltd (唯一製衣廠) into a leading supplier to major US apparel brands, earning him the nickname – “King of American name brands”. In fact, S.T. and Wearbest were featured in 1982 in “Enterprise”, a 30 minutes business program in the US produced by TV station WGBH Boston as the perfect representation of an international entrepreneur from Hong Kong. (See the link under sources for the Youtube video). In To Kwa Wan, the Wearbest Building still stands as a landmark from the golden age of HK’s garment industry. 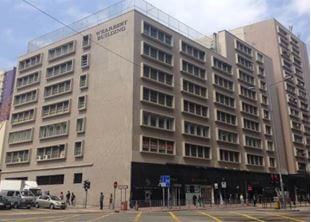 The Wearbest Building in To Kwa Wan.

The King family’s industrial involvement began with S.T.’s father Yeh-kung King (金亦耕 1898-1971, hereafter referred to as “Y.K. King”), whose Wha Mei Tobacco (華美煙草) was a leading local cigarette manufacturer in old Shanghai. In Y.K.’s obituary, it was mentioned that his many descendants were involved in textile, garments, knitwear, tobacco, toys, pharmaceutical, menthol and stockbroking, making them important players in the industrialization of China and HK over the past century.

A native of Wuxi in Jiangsu provinerovince, Y.K.King was a graduate of the Shanghai Public School for Chinese (華童公學) in the foreign concession. Earlier in his career, he was involved in the coal and shipping business before setting up the trading firm of Wico Trading Co (惠可行) in Shanghai in 1928 to import foreign industrial materials such as metals. Over time he also got involved in different industries and even served as chairman of the Watson’s Aerated Water Co (possibly connected with the A.S. Watson Co) in Shanghai but was best known for his involvement with Wha Mei Tobacco.

Wha Mei Tobacco (also referred to as “Hwa Mei Tobacco” in some publications) was formed in 1933 by China United Assurance Society (華安人壽), a leading Chinese life insurer at the time and its affiliate Kwang Hwa Petroleum (光華火油) and Mei Ta Petroleum (美大火油). Through aggressive marketing such as sponsoring scholarship contests and publishing newsletters, Wha Mei established its cigarette brands such as “Ginseng”, “Kwang Hwa”, “Maskee” and “Little General” in the marketplace. Unfortunately, Wha Mei’s production was suspended when its plant was destroyed during the Japanese aerial attack of Shanghai in August 1937. However, the firm managed to continue with new investors such as King, who became the manager of the firm.  In 1945, King became the majority shareholder of Wha Mei and under his management, the firm had over 1000 workers with 17 machines producing over 5000 boxes of cigarettes per month.

When the Communists took over Shanghai in 1949, Y.K. and his family moved to HK. He resumed his trading business in HK and Taiwan under the name of Wico (which operated out of 605 Chartered Bank Building in Central ) and specialized in importing plastic materials and dyestuffs from leading overseas manufacturers such as Celanese. Like many Shanghainese industrialists in HK at the time, Y.K. King hedged his bets by investing in Brazil and sending some of his family over in the late 1950s. Specifically, he invested in a vegetable oil plant in Brazil and installed his second son Yau-ding (金堯庭. 1925-) and third son Tung-ting (金棟庭) as directors in charge of finance and factory operations respectively. 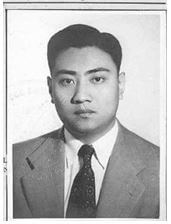 YK died in 1971 and was survived by 3 sons and 8 daughters. While YK did not get back into the tobacco business in HK, he remained very close to figures in the tobacco business socially and through marital ties. Two of his children married two children of Ho Ying-Chie (何英傑), the legendary founder of HK Tobacco and philanthropist – King’s second son Yau-Ding married Ho’s eldest daughter Ho Chin-ying (何琴珍) while his fifth daughter Rosita King (金梅英) married Ho’s only son Ho Kwan-kan (何關根).

One of Yau-ding’s daughters is married into the family of Chung Sih-ying (龔雪因), the distributor of Dow Chemical’s plastic materials in HK via Chung Nan Industrial Supplies and partner with the Ho family at the Far East Wool & Fibre Mill and HK Tobacco. Y.K.’s second daughter married S.Y. Chu, a plastic trader via HK Nam Hoi Trading and the son of Chu Chi-yun (朱子云), a famous Chinese doctor in old Shanghai who also co-founded Great Southeast Tobacco (大東南菸草) in 1925.

Their daughter Carmen Chu married a grandson of Hou-chin Ting (丁厚卿, 1887-1964), a major player in the tobacco industry in old Shanghai and later industrialist in HK and Brazil. Y.K.’s youngest daughter is married to the eldest son of Ang Ben Uh, the founder of leading textile concerns UTEX and Solid Mills in the Philippines, extending the family’s industrial network overseas.

Two branches of Y.K.’s descendants – the Chu family and the Fan family (most prominent member in recent years being the racehorse owner Peter Fan 范邦初 who is a brother in law of former Macau Chief Executive Edmund Ho Hau-wah) are involved in plastics. 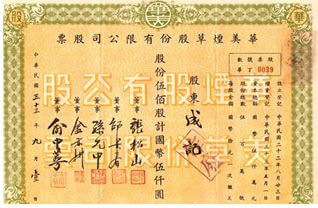 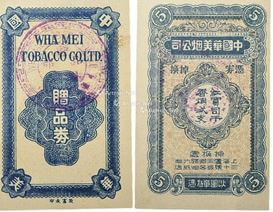 Born in 1922 and graduating from St John’s University in Shanghai in 1944, S.T. started his career helping his father at Wha Mei Tobacco in Shanghai and later at Wico Trading in HK. One of his father’s close friends was Seichi Takahata, founder and chairman of the Japanese trading house of Nissho Co Ltd (which later became Nissho-Iwai, now Sojitz). In the 1950s, Takahata asked S.T. to help him open Nissho’s office in HK and serve as its manager. S.T. politely declined the job offer but helped Nissho set up the branch in HK anyway, earning their trust. When Nissho became dissatisfied with some of their garment suppliers in HK due to delayed shipments, they asked S.T. to set up a garment factory to fill some of their orders and Wearbest was born in 1958.

Starting out with 60 sewing machines, Wearbest expanded quickly but production quality was a challenge. S.T. hired an American engineer at the annual salary of US$30000 (a large sum at the time) to tackle the quality issue and after 3 years of hard work, Wearbest established a reputation as a reliable high quality supplier. By the end of its first decade, Wearbest was producing in excess of 30000 dozen pieces of garment per month ranging from jeans, blouses and children’s wear.

Increasingly the orders were coming in from the US, where the “King of Blouses” Marlene Industries (founded in New York in 1947 by the Meltzer family, began importing from HK in 1955) and the “King of Bottoms” Regal Apparel were key clients in the early years.  The original Wearbest plant was a 4 story building in 275 To Kwa Wan Road which was destroyed in a fire in 1971.

In 1972, the firm leased 180,000 square feet of space at the Dynasty Building at 66 To Kwa Wan Road. Five years later in 1977, S.T. acquired the Dynasty Building from the iconic garment pioneer Mandarin Textiles (to be profiled in another article) and renamed it “Wearbest Building”. The firm also had a plant in Yuen Long in the New Territories which employed over 100 workers but most of them were reassigned to the main plant in To Kwa Wan when it was shut down in 1982.

By 1982, Wearbest was doing US$23 million in sales and US$3 million in profits with over 2000 employees and counted most of the major American apparel brands as clients (in alphabetical order) – Banana Republic, Bill Blass, Calvin Klein (Wearbest made 45% of Calvin Klein’s corduroy pants and Thomas Wu, chief buyer for CK in Asia was ST’s classmate from Shanghai), Dijon (children wear, Wearbest was responsible for all of its production), Forenza, GAP, Gloria Vanderbilt, Guess?, Jag, Limited, Outback Red, rio, Sasson (according to the video, Wearbest made 90% of Sasson jeans – sadly Sasson went bankrupt in 1986), Sergio Valente, Structure etc. The success of Wearbest could be attributed to its focus on quality, aside from S.T.’s master salesmanship and networking skills. This was achieved by maintaining well organized and clean facilities equipped with state of the art computers to program patterns and arranged for maximum yield. Its agility enabled it to supply jeans at a cost of $10 which retailed for $40 and to meet impossible deadlines such as the order from Sasson for 75000 pants to be delivered within 30 days featured in the TV program where they made 75 cents (USD) profit each and if failed had to suffer loss by paying airfreight at $2 per pant. Its success was also built on maintaining a happy workforce, who according to an article in 1984 had average monthly earnings of HK$3000-3500 (relatively high for a factory worker at the time) and with an annual bonus of $1300 plus perks such as family visit to the Ocean Park. 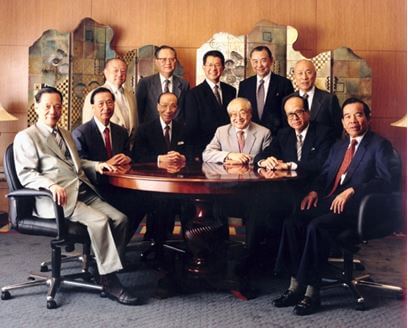 S.T. King (first from the left, back row) with fellow HK tycoons who backed the development of Suntec City in Singapore. Left to right in the front row: Chou Wen-hsien, Lee Shau Kee, Run Run Shaw, Frank Tsao, Li Ka-shing, Cheng Yu-tung. Left to right in the back row: ST King, CK Chow, Robert Wang (lawyer who put the deal together), Anthony Yeh, Li Dak-sum. Except for Lee, Cheng and Li, all others had Shanghainese roots.

Outside of Wearbest, S.T. served as honorary chairman of the HK Garment Manufacturers Association and the Textile Council and sang Chinese opera every week with his fellow Shanghainese tycoons as featured in a TV program. In 1990, the collapse of a huge canopy from the Wearbest Building resulted in 6 deaths and 7 injuries. With his profits in garments, S.T. made other investments, such as the 1979 kung fu movie entitled the Monk’s Fight produced by his second son James King (金元博).

However, his most prominent investment was Suntec City, the multi-billion dollar property development project in Singapore led by a syndicate of HK tycoons which started as a concept in 1985 and opened in 1997. Sadly S.T. did not live to see the opening of Suntec as he passed away at the age of 73 in 1995. He was succeeded at Wearbest by his eldest son George King Yuen-vung (金元文), a 1969 graduate of Philadelphia College of Textile. George was married in 1973 to Ruth Ma (馬清强), daughter of Chiuchow tycoon Ma Kam chan, the chairman of Tai Sang Land and Tai Sang Bank.