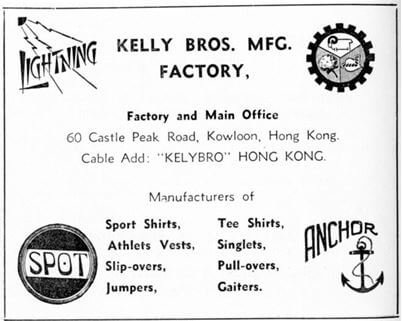 Founded in 1925, Kelly Brothers Manufacturing Factory (嘉綸兄弟織造) was one of the oldest garment manufacturers in Hong Kong, producing sport shirts, T-shirts, singlets, pullovers, vests etc under the “Spot”, “Anchor”, “Athlet” and “Lightning” brands. The brothers in the firm’s name refer to its founder Lau Koon-kau (劉冠球), and his brothers Lau Koon-chiu (劉冠朝) and Lau Koon-luk (劉冠祿).

Lau Koon-kau started the firm with HK$50,000 and initially focused on singlets but later expanded to sportswear and variety of other clothing. To emphasize the quality of its products, Kelly Bros only sold through the largest department stores in the local market and also exported to the mainland and Southeast Asia.The firm’s first factory was located at 142 Cheung Sha Wan Road. 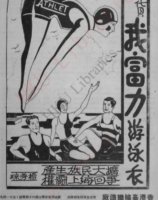 Kelly Bros’ ad for its Athlet brand of swimwear from the 1930s. The bottom of the ad include a quote from HK swimming champion Yeung Sau-king encouraging consumers to buy Chinese made products

Before the War, it primarily used Japanese and HK-made machines. In 1939, its factory was relocated to 60 Castle Peak Road with new knitting machines from the US and dyeing machines from England.

After the War, the firm expanded its export markets to the UK, Europe and Indonesia and by the early 1950s was selling 300,000 dozen shirts per year with the factory employing over 350 workers.

In 1952, the firm appointed a distributor in Malaya and Lau Koon-luk (who served on the board of the Knitwear Manufacturers Association) visited the Malaya peninsula to promote their products.

Not much information is available about the firm after the 1950s and outside of business, Lau Koon-kau was known for being an amateur photographer, participating in many photography competitions. 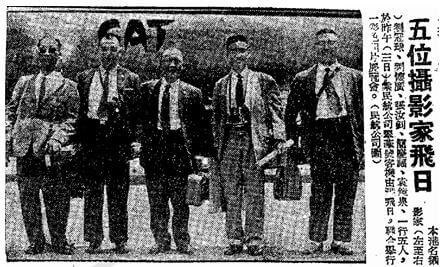