Hugh Farmer: The article The Hongkong Cotton-Spinning, Weaving and Dyeing Company Ltd 1898-1914 contained a number of terms with which I and possibly others are unfamiliar. I thought it might be useful to explain what these words or phrases mean and to briefly mention the aim of any process involved rather than detailed construction of any machine mentioned. The latter would of course also be useful.

I have leant heavily on William Jones’ Dictionary of Industrial Archaelogy Sutton Publishing, 1996 which is a valuable source for anyone wishing to understand more about the vocabulary of industrial history especially that of the UK. Many of HK’s large industrial companies used UK manufactured equipment and machinery as in the case of the Hongkong Cotton-Spinning…Company.

Carding  is preparing raw wool or cotton for subsequent spinning by separating, and paralleling the fibres of the tangled mass to form a sliver.  Carding is performed between the wires of card cloth which removes short fibres, untangles the mass of material, and brings the fibres more or less parallel with each other in a loose sliver or web, without any twist. The word carding comes from the Latin carduus meaning a thistle – thistles were used for this purpose, in the UK, in ancient times.

Carding Engine (or Carding Machine) Before the carding process was mechanised, it was done manually often by women and children. Carding became a serious bottleneck when spinning machines were invented, including the spinning jenny and spinning frame, which resulted in holding up the yarn process.In 1748 Lewis Paul invented a hand driven carding machine consisting of a card covered with slips of wire placed around a cylinder. However the most notable early carding machine, (or engine, as they were called) was invented by Richard Arkwright (1732-1792) and patented in 1775. This consisted of a cylinder carding engine, incorporating a crank and comb mechanism. The comb moved up and down, removing the carded fibres from the doffing cylinder in a “continuous filmy fleece”.

Later carding machines used two alternative methods, rollers (normally for wool) or flats (normally for cotton). The latter, as seen below, was a complicated machine consisting of a main cylinder and a series of metal bars of the same width as the central cylinder. The latter were covered on the inside with a ‘card cloth’ which was a fabric similar to a wire brush  and consisting of short, slightly bent metal pins or wires, set closely together in rows with their pointed ends of a uniform height. Only a few thousands of an inch separate the card cloth on the flats from that on the cylinder, and the cotton is carded between the two, the cylinder revolving and the flats remaining stationary. In some designs the flats actually move slowly round on a continuous chain, and when they are on the return strand and not in contact with the material being carded, they are cleaned of an adhering short fibres and fluff by fast rotating brushes. This enabled the machine to be kept in continuous operation.

From the article “The transfer of ﬁbres in the carding machine.”
M.E.M. Lee and H. Ockendon
Journal of Engineering Mathematics (2006)

Counts in textiles is a way of denoting the size of a yarn or thread by number. Usually a count is given by the number of units of length in a unit of weight, although for some materials the reverse method is adopted. For cotton the unit of length is a hank of 840 yards (at least it is in the UK), and that of weight is one lb or 7,000 grains.

Doubling is the twisting together of two or more single yarns to provide stronger ‘cords’ , or what is known as manifold yarns. Doubled yarn is used in sewing threads, lace, crochet yarns, carpets and industrial work where heavier and stronger yarns are needed.

Frames: The name frequently given to a complete machine, particularly in the textile industry:-

draw frame – a machine for drawing out the slivers produced by a carding machine, combining several together and attenuating them to the same cross-sectional area as one of the component slivers. The object is to improve a new sliver by making the fibres more parallel and evening out any defects or irregularities that might exist in individual slivers delivered from the carding machine. A draw frame is therefore a machine intermediate in the preparation of cotton for spinning into yarn.

intermediate frame – after the cotton strands have passed through the slubbing frame they are sometimes given another pass through a second slubber, sometimes known as an intermediate slubber, for cotton intended for fine spinning ie high counts. Intermediate frames usually have more spindles and wind onto smaller bobbins.

roving frame – a machine for the final attenuation of cotton slivers into a continuous strand of small cross-section prior to the actual spinning into yarn. The object is to reduce a sliver after it has passed through a slubbing frame into a roving, which is slightly twisted a little more so as to resist the tension of  being drawn off its bobbin by the spinning machine.

slubbing frame (or slubbing billy, speed frame) – a machine for further attenuating a sliver of cotton after it has been through a draw frame. The object is to reduce the cross-sectional area as another step in preparation for spinning, and here the drawing out of the sliver is such that it is necessary to twist it only slightly in order to preserve its cohesion and rounded form.

Laps – a wide sheet of cotton delivered by  a scutching machine. A lap comprises cleaned cotton fibres lying in all directions forming a continuous sheet, usually lightly would up into a roll and weighing about 40lb. Preparation of a lap is a preliminary process before the material is passed to carding machine.

Scutching machine – a machine for cleansing already opened raw cotton and forming the fibres into a continuous wide lap or sheet in preparation for carding. The scutching machine (known as a picker in the USA) was invented in 1797 by Neil Snodgrass of Johnstone, near Glasgow, Scotland but not patented. It was later improved by William and Andrew Crighton of Manchester (patent no. 1128, 1854) 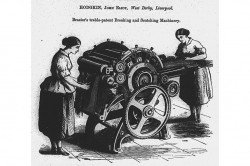 Sliver – a thick ‘rope’ or strand of soft, untwisted, continuous cotton with approximately parallel fibres, as delivered from a carding machine. It is therefore one of the first preparation processes towards the final spinning of cotton into yarn, and the sliver is usually coiled in a tall cylindrical metal can before passing to the next operation to further attenuate the ‘rope’ into a roving. Although the fibres in a sliver are approximately parallel, a certain amount of tangling is necessary to give coherence to the ‘rope’.

This article was first posted on 28th January 2014.