Tat Sheng Trading’s ad for the entire range of Sanyo products ranging from fans, cookers and transistor radios in 1958 (WKYP, 1958-6-5)

Earlier on the website, we have covered several Japanese brands such as Sony, Minolta and Ricoh which entered the HK market through partnerships with local firms such as Chung Yuen Electrical, Goddard and William S.T. Lee. Sanyo was one of the major Japanese electronics brands that emerged after World War II and for close to half a century from the 1950s to the early 2000s, it was distributed in Hong Kong through a partnership formed with local merchant Ng Chi-fung (吳志峯), first through Ng’s Tat Sheng Trading Co and later the joint venture known as Tatt Sing Sanyo.

Sanyo Electric (三洋電機) was founded in Japan in 1947 to export bicycle lamp generators by Toshio Iue (井植歳男, 1902-1969), who was formerly a partner at his brother in law Konosuke Matsushita‘s Matsushita Electric (松下電器, renamed Panasonic in 2008), the maker of the National/Panasonic brands. Sanyo, which means “Three Oceans”, reflected the ambition of Iue who wanted to sell his products across the three oceans – Pacific, Indian and Atlantic. The firm expanded into the production of radios in 1952, washing machine in 1954 (the same year it became a public company) and televisions in 1955. By the late 1950s, Sanyo products were exported overseas, and Ng Chi-fung’s Tat Sheng Trading became its HK distributor. Around the same time, Sanyo like its competitor Sony became interested in HK as a low-cost manufacturing base which also had the benefits of preferred trading status within the British Commonwealth, so the firm established its wholly owned subsidiary Sanyo Electric (HK) Ltd in 1960 and started its first overseas factory in HK in 1961 (the same year the firm began production of electronic calculators).

To promote Sanyo, Tat Sheng advertised the brand in major newspapers and built up a network of dealers, which became the cornerstone of its distribution strategy. In 1966, Ng and Sanyo decided to enhance their partnership in the form of a joint venture known as Tatt Sing Sanyo Electric Co Ltd (as a firm it was incorporated the next year) and the Sanyo Club was formed the same year to host monthly banquets for dealers of Sanyo products.

In June 1968, Tatt Sing Sanyo outgrew its space at Yu To Sang Building on Queen’s Road Central and relocated to the Wang Kee Building in Central (see article on Wang Kee) where it took over the entire fifth floor. (KSEN, 1968-6-24)

To incentivize its dealers, Tatt Sing Sanyo began organizing free overseas trips for its top dealers. In November 1968, Ng Chi-fung himself led a delegation of 35 dealers to visit Sanyo in Japan (KSDN, 1968-11-1) In the summer of 1970, Ng led a similar group for a two weeks tour of Japan which included visits to Sanyo’s head office and the Osaka World Expo and other tourist destinations (KSDN, 1970-8-2) This was followed by a larger tour group to Taiwan and South Korea for 65 dealers in 1971 and a tour to Singapore, Malaysia and Thailand for 70 dealers in 1973 sponsored by the firm (WKYP, 1971-11-28; KSDN, 1973-11-9). From then on, every year Tatt Sing Sanyo hosted tours for its dealers to various Asian countries and beyond. In 1976, it hosted the first tour exclusively for female dealers in the industry to Japan and the first dealer tour to Scandinavia and in 1977, the first dealer tour to North America. (KSDN, 1976-4-5, 1976-11-25, 1977-11-3)

Under the leadership of Toshio Iue’s brother Kaoru Iue (井植薰), Sanyo became a global powerhouse in the 1970s with its sales growing from US$71.4 million in 1972 to US$855 million by 1978. The HK business contributed to this success and Kaoru visited HK regularly to meet with Ng. In 1977, Tatt Sing Sanyo built its own 13 story Tatt Sing Sanyo Building at 36 Hung To Road in Kwun Tong. The same year, Tatt Sing Sanyo Refrigeration Engineering Co Ltd was incorporated to provide refrigeration engineering services in HK and at a global level, Sanyo bought Fisher Corporation (founded in 1945 by Avery Fisher in New York) from Emerson Electric and as a result, Tatt Sing Sanyo began distributing the Fisher brand of speakers and other stereo products through its dealers in HK.

To help promote the Sanyo brand, Tatt Sing Sanyo sponsored popular Japanese TV programs dubbed in Cantonese on TVB in the 1970s. By 1978, the dealer banquet hosted by Tatt Sing had over 800 attendees, highlighting the strength of its distribution. (WKYP, 1978-12-9)   By 1979, the size of these monthly banquets exceeded 1000 attendees. In addition to food and beverage, these banquets also included product showcase and lively discussions where dealers compared notes (WKYP, 1979-9-1). Most of the banquets were held at the Chinese Restaurant & Nightclub (中華酒樓）in Tsim Sha Tsui, which was founded by 20 shareholders including Wong Chung-ming of Tung Chun (see article on Five Treasures of Sauce) and Yeung Yiu-chung, the king of industrial buildings (see article). 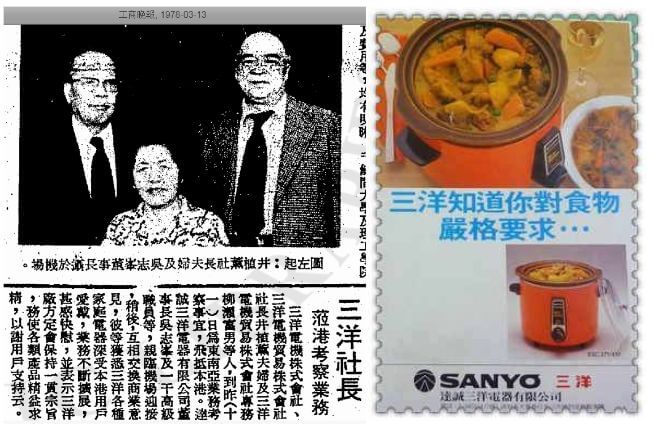 Outside of Tatt Sing Sanyo, Ng Chi-fung served as chairman of the historic Chinese Club from 1977 to 1980. The distribution network of Tatt Sing Sanyo remained strong in the 1980s with the monthly banquets continuing with over 1000 attendees but competition had become more intense with technological advancements such as videotape, CDs and computers and Sanyo playing catch up. Kaoru Iue stepped down in 1986 and was succeeded by his nephew Satoshi Iue who resigned in 1992 after the firm posted a loss. In the late 1990s, the firm returned to profitability with successes in digital cameras (30% market share at one point) and LCD projectors (#2 in market share)

In 2003, Tatt Sing Sanyo as a firm was dissolved. Sanyo incurred significant losses by the mid-2000s and coupled with the financial crisis, the firm was sold to Panasonic in 2009.

Sources (other than what’s cited above)

This article was first posted on 10th January 2020.