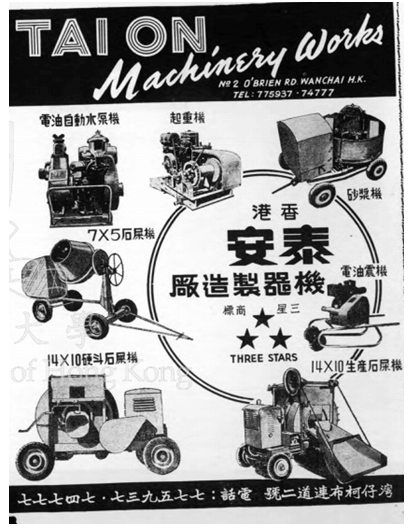 The construction boom in Hong Kong in the 1950s and 1960screated significant demand for construction machinery and while many of the equipment were imported by the likes of China Engineers, a number of domestic equipment manufacturers such as Tai On Machinery Works emerged during this era with its “Three Stars” line of construction machinery such as concrete mixers, concrete vibrators and swing weight batchers. At its peak in the 1960s, the firm also manufactured its own brand of fire-fighting equipment and electric fans, had its own factory buildings and established a joint venture in Singapore for distribution of its products in Southeast Asia.

Tai On was founded in 1955 (although the firm was not incorporated until 1962) by Lau Kwong(劉光). Born in 1924, Lau was a native of Dongguan in Guangdong province and was active with community affairs outside of work, having served as a director of the Tung Wah Group of Hospitals in 1963-64 and also director of Po Leung Kuk and the HK Lau Clansmen Association and chairman of the Tung Koon District Association. Lau was described in one article as an expert in the design of industrial machinery but it is unclear as to where he attained his engineering training. He was involved with the Lung Kong Federation, a fraternity organization formed in HK in 1960 for Chinese with the surnames Lau, Kwan, Cheung and Chiu who believed they are descendants of the heroes of the same surnames from the Three Warrior States period. The leaders of the organization included titans of the construction industry at the time such as Cheung Chan-hon of Cheong Lee Construction and Kwan Mui of Sang Hop & Co who might have been clients of Tai On’sconstruction machinery. 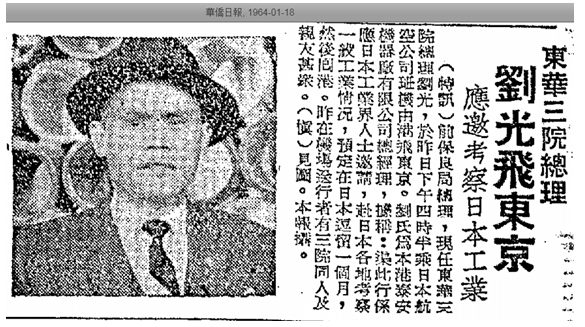 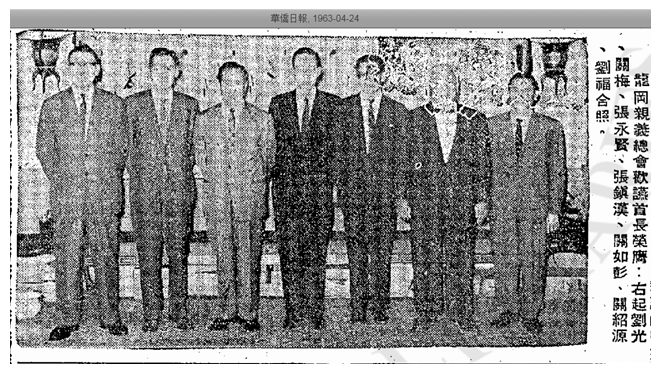 The original plant for Tai On was located at 2 O’Brien Road in Wanchai and in August 1963, an additional plant was added in 648 Castle Peak Road and the firm also began installment sale of its products to expand its client base. By this time, the firm’s product line had extended from construction machinery to fire extinguishers and electric fans under the “Wai Fung” brand (威風牌) although its popularity never reached the level of competitors such as SMC, DEMC and TAT profiled in an earlier article. The same year, the British fire-fighting equipment maker Kingsford appointed Tai On as the Far East distributor of its products. In 1966, Tai On hired fire-fighting expert Chak Shing-chik as manager and won the fire extinguishing equipment business for the HK Products Expo that year.

In December 1964, Tai On completed its own 8-story building on 4 Hung To Road in Kwun Tong, with its manufacturing operation occupying the first 4 floors with the remaining 4 floors leased out to China Leather Shoe Co for storage of leather goods. Based on information disclosed in a lawsuit between Tai On and the Commissioner of Inland Revenues, Tai On record profits of over HK$100,000 in 1965/66. 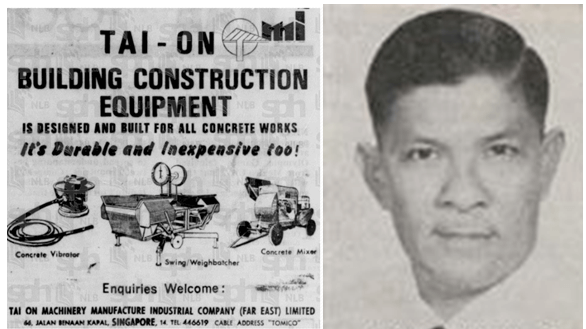 In 1968, Tai On formed Tai On Machinery Manufacture Industrial Co (Far East) Ltd. in Singapore in partnership with Eagle Engineering, a leading local shipbuilder and engineering concern founded by Loke Mun-chong (陆文忠) and his brothers Loke Mun-leng (陆文领) through the introduction of the Economic Development Board. The joint venture was responsible for the distribution of Tai On’s construction machinery in the Singapore market.

Back in HK, the firm expanded its product line to plastic machinery in 1968 to capitalize on the boom of the HK plastic industry. In May 1970, a fire broke out at the second floor of the firm’s Kwun Tong plant where it was storing transistors, resulted in over HK$1 million in damages and one man was hospitalized. In 1971, Tai On Lau’s Enterprises was incorporated as the holding company for Tai On Machinery Works and others. In 1974, Tai On formed Taion Kanazawa Industrial Co Ltd (泰安金澤實業) in Hong Kong in partnership with Japanese tractor manufacturer Kanazawa Industrial to manufacture construction materials, fire fighting equipment, transportation equipment and wheels in HK and Southeast Asia. (KSDN, 1974-7-29) The various Tai On companies had since dissolved – Tai On Machinery Works in 1980, Taion Kanazawa in 1987 and Tai On Lau’s in 2000.

This article was first posted on 28th December 2018.