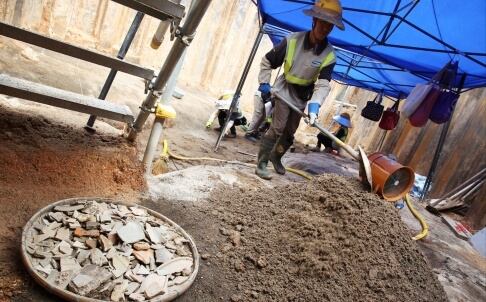 The article begins, “In fast-paced metropolitan Hong Kong, it is easy to forget the past, but a recent slew of underground and underwater discoveries have reminded people that their city has a long history.

A stone tablet on the island of Ma Wan. An archaeological site dating back to the Song dynasty (960-1279) unearthed along an under-construction railway line, a shipwreck found in Wan Chai’s waters during dredging works, and more recently the remains of a purported wartime sunken ship found by divers off Po Toi Island have all sparked calls – even if briefly – for the redoubling of efforts at historical investigation and preservation. Yet what are the policies governing the city’s hidden ancestral assets?”

“[In 2006] Kevin Sun Tak-wing, then head of the Antiquities and Monuments Office’s (AMO) archaeology team… [ lamented] the fact that Hong Kong had only about 10 archaeologists conducting fieldwork then.

At another international conference in Beijing in 2008, he was equally candid. He said Hong Kong had the most outdated antiquities law in the whole Greater China region. The laws have not been revised since their enactment in 1976. By contrast, the mainland updated its rules in 2002, with Taiwan doing so in 2005 and Macau in 2008.”

A number of sites are mentioned in the article including:
– “an under construction railway line”
– Lei Cheng Uk tomb
– remnants of Kowloon Walled City
– a old kiln in Wun Yiu village, Tai Po