In the 1930s to 1960s, two stores in Central with “Elite” in its names – Mode Elite and Elite Styles – catered to high-end customers and imported the latest fashions from the US and Europe.

Mode Elite was originally founded in Shanghai in 1918. As shown in the ad above, its first store was located at 19 Broadway and it was originally a custom tailor shop specialized in making hats and costumes for ladies. Tsao-Ling Wong (黃兆麟, 1887-1955), the founder of Mode Elite, was a native of Ningpo where many Shanghainese tailors came from (see articles) and the 1918 ad also emphasized that his tailors were “Elite trained men under expert foreign supervision”. In 1925, T.L. Wong was manager of the firm with S.B. Wong as treasurer and K.F. Wong and K.S. Chu in its staff. (Comacrib Directory). The Shanghai store moved to 26 Broadway by 1932 and again to 60 Broadway by 1936.

Left: Mode Elite’s ad in HK promoting Gage hats in 1939 (The HK Telegraph, 1939-8-26); Right: Mode Elite on the ground floor of the Kayamally Building in Central in 1941 (Harrison Foreman Collection)

By the early 1930s, Mode Elite had secured the sole distributorship in the Far East of hats made by Gage Brothers & Co from Chicago. Gage had been making hats since 1856 and its “Gage hats” were popular in the US and Europe. Advertisements for Mode Elite from the era also mentioned items from Saks Fifth Avenue in New York and “Paris Chic” and “May Blossom” hats. According to Enid Saunders Collins’ The Breach in the Wall: a memoir of the Old China (1987), the Gage hats “were very good indeed” and Mode Elite’s Shanghai store “sent out wonderful circulars to lure” customers to its store.

Mode Elite did not have any branches until 1932 when it opened its Hong Kong branch at Kayamally Building (built in 1928, part of the current Central Tower) at 20-22 Queen’s Road Central, first at the mezzanine floor and later moved to the ground floor by the end of the decade as business expanded. It also added a Hankow branch at 33 Sankiao Street and by 1938, a branch was opened in Singapore at Rodney House at 10 Battery Road where it advertised aggressively in the local newspapers.

As the Sino-Japanese War progressed, T.L. Wong relocated from Shanghai to Hong Kong and was listed as a juror in the 1939 and 1940 HK Jurors list with address listed as the top floor at 9 On Lan Street in Central. It is unclear if Mode Elite remained open in HK during the Japanese occupation while its Singapore branch which boasted the “biggest and finest collection of hats in Malaya” was running sale right up to the fall of Singapore in February 1942 based on its advertisements in the Straits Times.

After the War, T.L. Wong continued to operate Mode Elite at 22 Queen’s Road where it was selling Jacque Fath perfumes from Paris, Lady Marlene bras and Haymaker shoes from the US. In September 1955, T.L. died after a short illness at the age of 68. He and his wife Shi Meiying (石梅英) had a son and a daughter – John Wong (黃約翰) and Amy Wong Kao (黃秀寶, 1914-2012) and it was Amy and her husband Jung Tak-wing Kao (高德榮, 1908-) who took over Mode Elite after his death. Under the management of the second generation, the business continued to expand. In 1956, Mode Elite opened its first bargain counter on the 4th floor of the Kayamally Building. The firm at the time had buyers based in New York, Paris, Rome and London to procure the latest fashions and send them to Hong Kong by airfreight. (KSDN, 1956-7-4)

In 1958, Mode Elite Ltd was incorporated and a Kowloon branch was established on the ground and second floor of the at the newly developed Ocean View Court (see article on Kiu Fung Investment) at 27 Chatham Road in Tsim Sha Tsui. The opening was attended by the leading Cantonese and Mandarin movie acresses and Chinese and Western socialites at the time. By the late 1960s, its main store in Central had relocated to 6 D’Aguilar Street and it also had a store in the relatively new Ocean Terminal in TST in addition to the Chatham Road location. 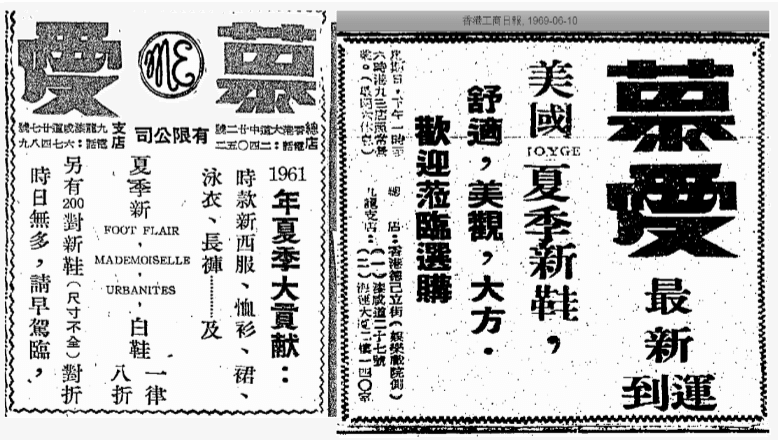 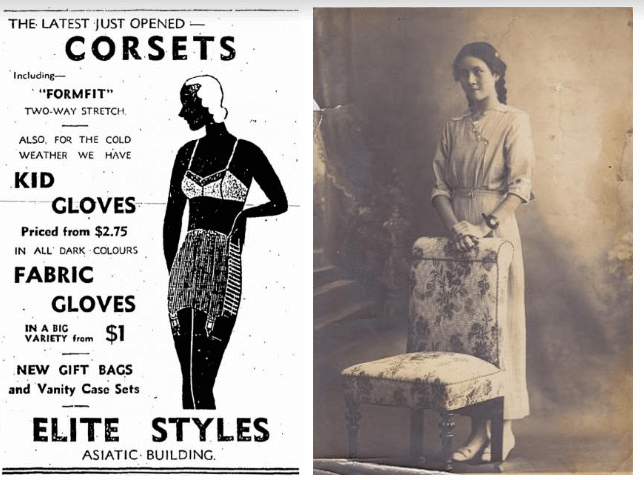 Elite Styles shared the same name as a fashion magazine published in New York from 1896 to 1929 and the store was operating out of the Asiatic Building in Central when it advertised a variety of products as shown in above ad in 1934. According to posts by Stephen Rapley on Gwulo (https://gwulo.com/node/35709), Elite Styles was founded by his paternal grandmother Isabel Agnes Allen in the early 1930s. Isabel was the wife of Lewis Stephen Rapley (1885-1936), the manager of the famous HK tailor shop James T. Shaw from 1918 to the mid-1920s (see Part II of Famous Tailors series of articles) and allegedly she traveled to Paris every year to bring the latest fashion back to HK and died sometime in the mid-1930s.  According to the Directory of China, Japan, Corea and Indochina, the manager of Elite Styles by 1938 was Lee Bing-fun (李炳芬), who managed the firm until the 1960s and the store remained at the same location in Central which by then had been renamed Shell House.

As shown in above ad, by 1960 Elite Styles had its main store on the ground floor of the China Building in Central and had branches in North Point (King’s Road), Tsim Sha Tsui and Mongkok. It sold a wide variety of luxury, foreign products such as neckties from the US and Switzerland and Jaeger White Stag jackets which were imported by airfreight every day. 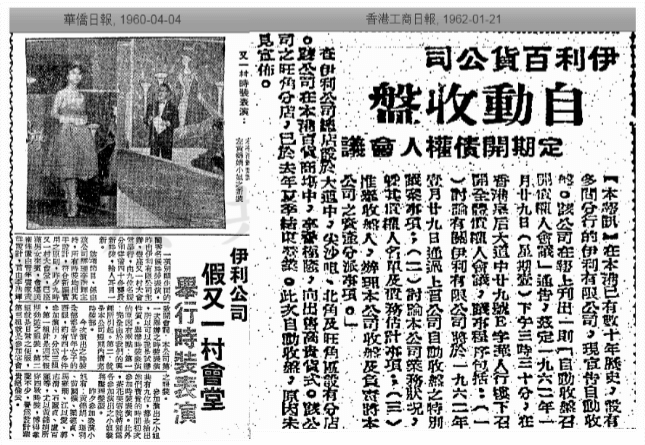 By the 1950s, Lee Bing-fun was supported at Elite Styles by his son Lee Ho-fai (李浩輝), who married Wong Kam-tong (黃錦棠), the daughter of Dr. Wong Pun-cheuk (黃品卓), head of the war hospital for the BAAG during the War and later member of the Urban Council (1973-79) at the St Teresa Church in 1959. His eldest daughter Lee Ho-shan (李浩珊) married the son of the comprador of HSBC in Bangkok in Australia in January 1958 and when they returned to HK in February, the banquet at Kin Kwok restaurant was attended by Sir S.N. Chau, taxi king Tsan Yung and many of Lee’s retail industry peers such as Kwok Lam-po and Thomas Le C. Kuen of Wing On, Bunnan Tong and Ko Yin-yue of Wellcome and the Sun family of Yee Sang Fat (store out of King’s Theatre in Central).

In April 1960, Lee Ho-fai organized a fashion show for Elite Styles at the town hall of Yau Yat Tsuen which featured nine young models and 40 different outfits. (one of the models has the same Chinese name as the fashion guru Joyce Gokson Ma). However, business was not going well and the Mongkok branch was closed in the summer of 1961. In January 1962, Elite Styles Ltd applied for voluntary dissolution. As firms both Elite Styles Ltd and Elite (Kowloon) Ltd were dissolved in 1978.