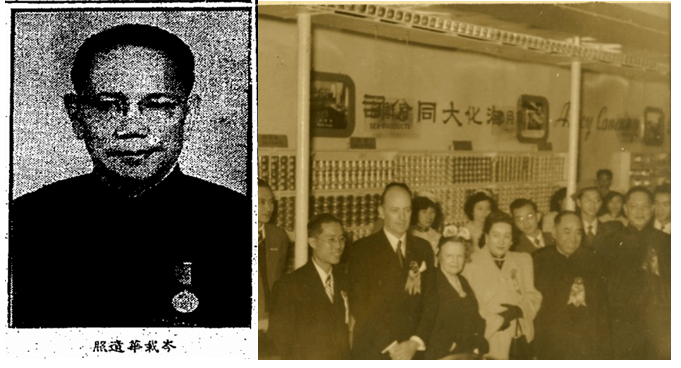 Although largely forgotten today, Shum Choy-wah was a leading figure in HK industries from the 1940s to 1960s, having served as chairman of the Chinese Manufacturers Association (1946-1952, honorary chairman afterwards), the Hong Kong Weaving Mills Association (布廠商會) and the Kowloon Chamber of Commerce during that period. As the head of CMA from 1946 to 1952, he led the group’s delegation to the British Industrial Fair in 1948 and was instrumental in re-establishing the HK Products Expo (which stopped during the War) the same year – which became a major social and economic event for the next three decades and continue to this day. He also helped to defend the interest of the HK industries locally and globally during the difficult early years of the 1950s and promoted the concept of building industrial schools to train the necessary skilled labor for HK’s industrial development. For his contributions to HK industries, he was awarded a certificate of honor by the Queen in 1954.

A native of Shunde in Guangdong province, Shum moved to Singapore at an early age where he achieved success in the import and export of silk under the name of Yick Tai & Co (益泰) with branches in Kuala Lumpur and Johor. When the Singapore Chinese Chamber of Commerce organized its Chinese Products Expo in 1935, Shum was a member of the product selection committee. In the late 1930s when the Japanese invaded East and Southern China and disrupted the source of silk goods, Shum decided to move north to HK in 1937 to help build up its industries. Over time, Shum established a number of enterprises (mostly industrial) in Hong Kong including Sun Ah Silk & Cotton Weaving, Kow Yue Weaving, Wah Shing Weaving, Kum Wah Dyeing Works, United Rubber Works and Sun Kwong Hotel and below are the description of each of them in chronological order of inception: 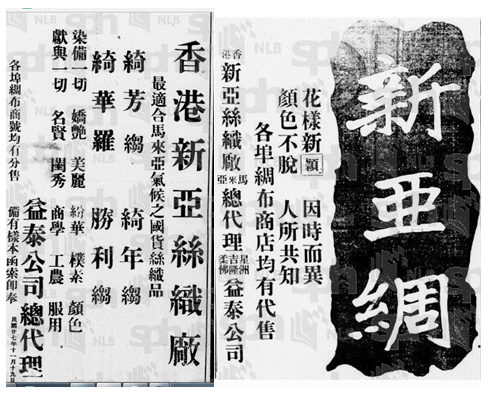 The first company which Shum set up in HK was Sun Ah Silk & Cotton Weaving which was established in 1937 to manufacture silk cloth. At the time, many famous manufacturers from Shanghai and Canton were setting up factories in HK as the Japanese occupied their home turf, including Mayar Silk Mills from Shanghai which was one of the leading silk weaving mills in China. Sun Ah’s plant was located at Fuk Wing Street in Sham Shui Po and a branch factory was set up on Shan Tung Street in Mongkok. The two factories had 200 machines and 600 workers and in terms of raw materials – all its artificial silk (art silk) were imported from the UK while the raw silk were imported from China. The firm produced a variety of colored silk cloth which were exported to Southeast Asia with Shum’s Yick Tai acting as exclusive agent and its advertisement claimed that its products were the most suitable for the Malaysian climate. 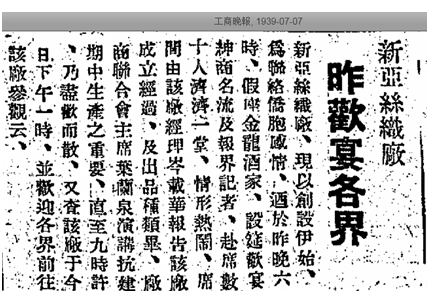 In 1940, Shum established Wah Shing Weaving, which specialized in making military uniforms and tents. In 1954, it worked with the trading firm of Abdoolally Ebrahim to export 120,000 military uniforms to the Malaysian government. It also exported to the UK and South Africa and in the mid-1950s expanded into making gloves. The firm’s factory was located at 439-441 Castle Peak Road, which was taken over by the Easey Garment group which re-developed it into Hensey Industrial Building. 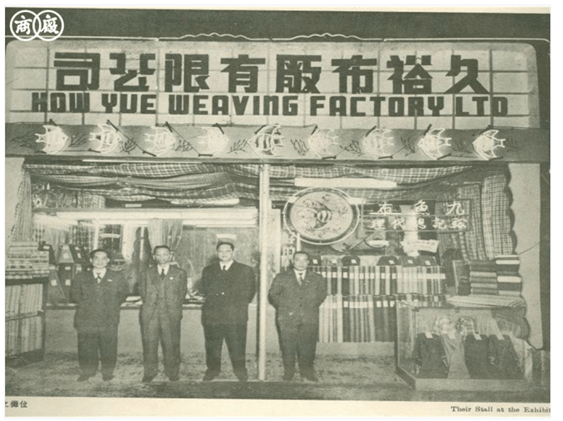 After the War, Shum established Kow Yue Weaving to manufacture cohesive fabric, woven fabric, checkered fabric and various cotton woven products. The firm was incorporated in 1949 but it was likely founded in 1947, the year it joined the HK General Chamber of Commerce. The brands manufactured include “Nine Fishes” (九魚牌, which has the same sound as the firm’s name in Cantonese), “Three Fishes” (三魚牌) and “Golden Cow” (金牛牌) and they also made a line of sarongs for the Southeast Asian market under the “Silver Mink” brand. In addition to Singapore and Malaysia, the firm’s products were also exported to the UK, Australia, South Africa and Indonesia.

Kow Yue’s plant was located at 370 Castle Peak Road. As a proponent of industrial training, Shum offered 3 months apprenticeship to young workers (19-21) at Kow Yue as a way to train and recruit new workers. (In 1951 the class size was 20). In 1949, labor unrest broke out when Kow Yue management decided to cut worker comp from $5 apiece to $4.40 and Shum at the end changed it back to $5 and a strike was averted. In 1950, the firm acquired warp sizing machines from Shanghai which could process 12000 yards of yarn within 12 hours (20 times more efficient than manual process), doubling its production capacity.

During the 1950s, the head office address of Kow Yue Weaving was listed as 159 Connaught Road Central, which was the address of Sun Kwong Hotel, a hotel which Shum was a director and part owner of. The 7 storey hotel originally opened as the Empress Hotel (皇后大酒店) in 1927 by Ma Tau-nam (馬斗南, d 1953). Shum teamed up with a close friend and business associate from Singapore – Chan Chok-sun (陳作新1899-1972) to acquire the hotel from Ma after the War and renamed it Sun Kwong. In addition to Sun Kwong, Chan also operated the Sun Sun Restaurant (新新餐室), Melbourne Hotel (2-12 Mody Road in TST), Melbourne Apartments (Chatham Road), Wo Ping Hotel (343 Nathan Road) and Rodo House (240 Tai Po Road) and travel agencies in Singapore and Penang. Chan was also vice-chairman of Wai Yeung Commercial Association and Chairman of Tsim Sha Tsui Hotel & Boarding Houses Association and Singapore Importers Association. Chan sold the Sun Kwong Hotel in 1964 and in 1974 the site was re-developed into Kai Tak Commercial Building.

Other Activities and Family

Aside from the enterprises described above, Shum was also managing partner of Kum Wah Dyeing Works which was located at 24 Cheung Fat Street and director of United Rubber Works, a maker of rubber footwear, tires and tubes that was incorporated in 1947 and dissolved in 1953. When Cheong Ying-chan (張英燦, father of Legco Councilor Stephen Cheong), a family friend needed help to revive his business, Shum lent him four machines for free in return for his expertise. The business evolved into Lee Wah Weaving Factory, one of the leading weaving mills in HK.

When his CMA friend, the preserved ginger king U Tat-chee formed the Yau Yat Tsuen Development Co Ltd in 1949 to develop the high end Chinese residential area of the same name in Kowloon, Shum and Bunnan Tong (metals trader and part-owner of Wellcome) were vice chairman of the firm with Ku Chock-lun as treasurer and other directors included Ko Yin-yue (founder of Wellcome supermarket), Hui Yeung-shing (founder of Park and Shamrock Hotels), Robert Der (謝伯昌,head of Kowloon Chamber of Commerce), Chan Yau-yiu (陳友耀, leader in the piece goods business), Kong Hoo-cheong (江灝昌,U’s partner in the preserved ginger trade) and Yung Hin-chiu.

He also continued to operate Yick Tai in Singapore as Southeast Asian distributor of his factory outputs in HK and worked on plans for a “Chinese Only” department store in Singapore in 1948. In 1951, he helped launch the bi-annual HK Chinese Products Fair in Singapore. 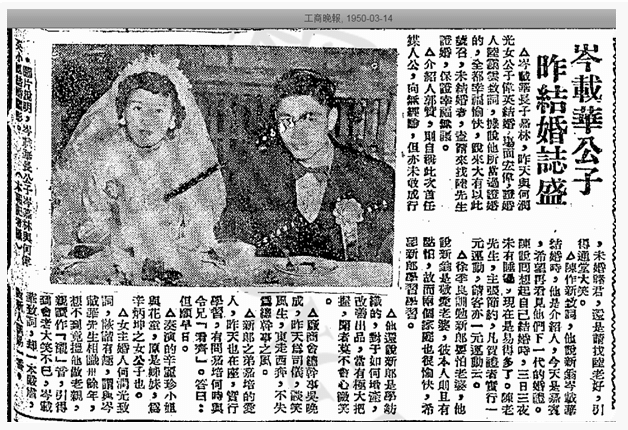 Outside of industries, Shum Choy-wah also did a lot of charity work having served as director of the Tung Wah Group of Hospitals (1946-47 alongside his fellow CMA leaders C.L. Hsu of Diaward and U Tat-chee) and Lok Sin Tong and was chairman of the Taoist temple Lung Hing Tong (龍慶堂) and founded the Sin Tin Toa Home for the Aged (先天道安老院) in 1944 in Sham Shui Po (later moved to Shatin in 1948) with the support of Tiger Balm king Aw Boon-haw during the Japanese occupation.

His eldest son Shum Kar-lam (岑嘉林) was born in Singapore and studied in HK, Shanghai and UK. He worked for Wah Shing Weaving and in 1951 went to UK as representative of HK. He left the family business to join Standard Oil and was appointed PR manager in 1968. On December 23, 1969, Shum Choy-Wah died at the Baptist Hospital in Kowloon at the age of 65 (although one report cited his birth year as 1908 which would make him 61) after a period of illness. His children donated the $20000 received at his funeral to the CMA educational funds.