Elizabeth Ride: Now, here’s a mystery.  After reading the latest BAAG article, Bosco Radio Corp, the Gardner brothers and Kyoei Corp, I followed the link to the Shirogane Maru, and found that it differs in one important point – the fate of the ship.  Wrecksites has it remaining in Buin for the duration of the war, while BAAG has it entering Kowloon Docks for repairs and refitting in 1944.  Could this be the same Maru?

Kwong Chi Man:  Regarding the Shirogane Maru. I found a Japanese document (in 1939) about the small Shirogane Maru (a steamer running between HK, Macau, and Canton before the war and continued during the Japanese occupation). The large Shorgane Maru (3,000t) that was abandoned in the South Pacific in 1942 was another ship.

HF: Here’s what the ship looked like according to the BAAG agent’s observations in 1944.

And here’s what it looked like pre-war, according to www.combinedfleet.com founded by Jonathan Parshall. This website contains extensive information about the Imperial Japanese Navy during WW2. But note the different spelling.

ER: This BAAG  report has it entering Kowloon Docks for repairs and refitting in 1944. 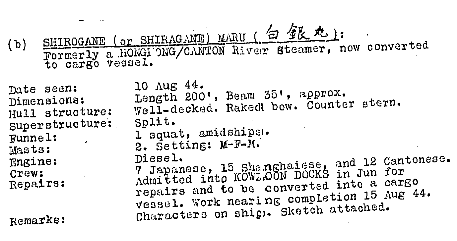 HF:The website wrecksite however says, “On September 15th 1942 US submarine USS Amberjack torpedoes… Shirogane Maru at the northern entrance of the Bougainville Straits… Destroyers Amagiri and Hatsuyuki rescue the survivors. To prevent her sinking [the ship]  is towed and grounded at Buin. Efforts to float her are in vain and [it] remains in situ during the war.

The combinedfleet article on the ship written in 2012 by Gilbert Casse, Bob Hackett and Peter Cundall has this to say on the Shirogane Maru. I have abridged what they wrote to the laying down of the ship and its launch. And the events leading up its demise in October 1942 when grounded near Buin town on Bougainvillea island. It also appears to confirm that Shirogane Maru ended her days in the south Pacific in 1942.

23 July 1938:
Aioi. Laid down by Harima Steel K.K. shipyard for Nippon Kaiun K.K. as a 3,130-tons cargo ship.
31 October 1938:
Launched and named  SHIROGANE MARU
15 September 1942:
Departs Truk for Bougainville Island, Solomons.
19 September 1942:
About 11nm E of Luluai Point, Bougainville. LtCdr John A. Bole’s (USNA ‘28) USS AMBERJACK (SS-219) sights a transport. At 1005, Bole attacks and hits SHIROGANE MARU’s starboard side in the boiler and engine room, at 06-33S, 156-05E. Three men are KIA. The impact causes a hole of about 2.8ft radius. Water rushes in and floods the engine room by 7ft. The ship goes dead in the water. Later in the day, destroyers AMAGIRI and HATSUYUKI depart Shortlands to assist the damaged transport. SHIROGANE MARU is towed to Shortlands where unloading is processed.
20 September 1942:
To prevent her sinking, SHIROGANE MARU is grounded at Buin.
27 September 1942:
Efforts are being made to lighten the ship. Materials of the 16th Naval Construction Unit are, as much as possible, unloaded. However, towing still proves impossible to make and therefore, no further work is undertaken.
28 September 1942:
Remains of the dead are to be transferred to Sasebo under telegram No. 281430.
16 October 1942:
All hands abandon ship.
October 1942~June 1945:
Ship remains in situ but is still retained in the Navy’s list.
30 June 1945:
Removed from the Navy’s list under internal order No. 577

To add to the confusion warsailors.com  has a comment by Kurt Hoffman saying “on 31.08.1943 the Japanese SHIROGANE MARU was sunk by US Bombers between Amoy and Hongkong.”

HF: There is slight variation in spelling within these sources Shiragame, Shirogane, Shiragane… how many ships are we talking about?

Stephen Davies: On the Shirogane Maru, having read the post, it seems to me clear from the drawing and data, and cross-correlating them with the pic., that the vessel that entered the docks was NOT the large vessel but the smaller.
Why?
Well what is needed is a close inspection of the Lloyd’s Register data that appears in the Wrecksite entry (see http://www.wrecksite.eu/docBrowser.aspx?fwJpIR62h7YoEFIdgMb6fg==) cross correlated with the BAAG report and combined fleet website, this shows the following:

1. that there are not just two but FOUR variant spellings in the Romanized name.
2. Lloyd’s Register opts for ‘Sirogane Maru’ in most cases but has ONE (http://www.plimsollshipdata.org/pdffile.php?name=30b1081.pdf) ’Shirokane Maru’ – a very small wooden, twin screw diesel vessel launched in 1912 and still listed in 1940.
3. there were THREE vessels of the ’Sirogane Maru’ variant name in operation in 1941-42, though the 3rd was the 1937 launched Sirogane Maru No.12 and only 112’ long, so can be disregarded
4. TWO of them are the two Elizabeth is discussing.
5.  ON45454, call letters JHZL, is a 1938 launched, ex-Nippon Kaiun KK, Harima Shipbuilding & Engineering Co. built, twin deck, 3130 GRT, 318’ loa, 46’ beam steamer and therefore NOT the one described in the BAAG report because it is too big (if you look at your photo you will see she is flying her call letters JHZL)
6. ON44369, call letters JFDM, is a 1938 launched, ex-SetsuyoSiyosen KK, Mitsubishi-Jukogyo KK, Kobe built, single deck, 929GRT, 185’ loa, 31’ beam diesel powered ship CRUCIALLY with a circled ‘P’ in the entry indicating she was a passenger ship (hence the requirement for conversion to a cargo ship)
7. BOTH 5 and 6 are described as having counter sterns (as in both drawing and photo)
I think it follows that the vessel described in the intelligence report at only 200’ long and needing conversion is the second, smaller Sirogane Maru, is the ship that Dr Kwong Chi Man describes, and is not the larger one. This solves Elizabeth’’s problem I think.
This article was first posted on 12th September 2014.

The website has several articles about British Army Aid Group (BAAG) reports from HK during WW2 and about various aspects of life in HK during the Japanese occupation. The index shows all of these.