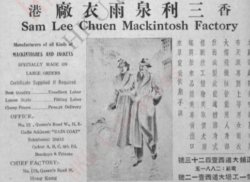 Founded in 1925, Sam Lee Chuen Garment Factory (also known as Sam Lee Chuen Wing Kee) was a pioneer in manufacturing raincoats and other outerwear in Hong Kong. Aside from raincoats, it also made trousers and a variety of jackets including light jackets (which the Cantonese refer to as 飛機恤 or “airplane shirts”), down jackets with hood (which the locals refer to as 太空褸 or “space jacket” since the 1960s, unclear who was the clever marketer who coined the term which capitalized on the space fever at the time) and ski jackets. The factory was started with 20-30 workers and by 1956 had over 200 workers with monthly production of 5000-6000 dozens which were exported to Southeast Asia, Africa, Middle East, the UK and Canada with Indonesia and Africa being its biggest markets, marketed under its Swan and Winter Garden brands. Its plant was originally located in Sheung Wan – first at 112 Queen’s Road West (while its store was at 123 Queen’s Road West) and later at 3 Kom U Street but by the 1960s it had relocated to Kowloon at 5th floor, 10 Sam Chuk Street in San Po Kong. 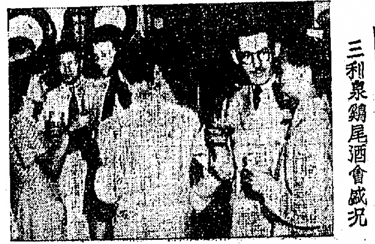 Article on Sam Lee Chuen’s new plant in 1971 with picture of chairman and managing director Chan Hon-wing and the new building in Kwun Tong (WKYP, 1971-10-8) In the 1950s and 1960s, the firm expanded rapidly under the leadership of Chan Hon-wing (陳漢榮, same Chinese name as Chan Hon-weng of Swatow Weng Lee but not the same person) and his brothers Chan Hon-ming (陳漢明) and Chan Hon-yiu (陳漢堯). In October 1971, Sam Lee Chuen moved into its new 9 storey, 45000 sq ft building at 2 Tai Yip Street in Kwun Tong. The building was fully occupied by the firm which had 1000 workers at the time and new machines were added to increase production capacity.
As a firm, Sam Lee Chuen Garment was incorporated in 1968 and dissolved in 2002.