Gregory Crouch has kindly given permission for extracts from his article, Pearl Harbor Day in Hong Kong: “Those planes are Japanese!”, to be posted on our website. Gregory’s full article is linked below. 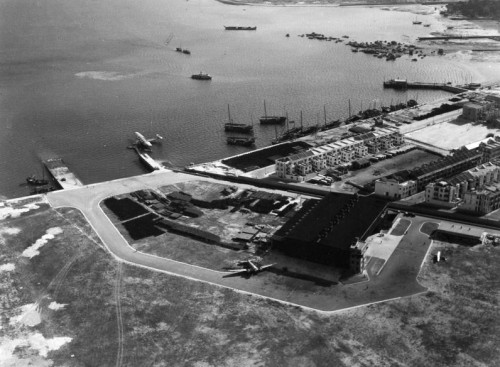 Kai Tak airport, pre-war, showing the main hangar and a flying boat tied up at the Pan Am pontoon. (Which looks to me like one of Pan Am’s three M-130s.) (Shirley Wilke Mosley collection)

A few minutes before 8:00 a.m., Chen Teh-tsan, T.T. Chen, a member of CNAC’s Hong Kong ground staff , was unloading the busload of Pan Am passengers he’d escorted to Kai Tak from the Peninsula Hotel, the sumptuous lobby of which the airlines used in lieu of a bona-fida passenger terminal. Suddenly, a noise. Everyone stopped. Airplane engines droned in the distance, growing louder.

“Look!” A passenger pointed to a gaggle of aircraft bearing down from the north at medium altitude.

Chen had been in Chungking a few weeks before. He squinted at the formation. “No!” Those planes are Japanese!”

Pandemonium erupted. The passengers scattered. At a dead run, four of them followed Chen across the street and leapt into a dry drainage culvert with a bunch of blue-coveralled airport coolies. Maintenance Chief Soldinski sprinted to his car and raced for home. The crew of the Pan Am clipper took shelter in the sturdy dock house and yelled for Captain Ralph, who was still in the plane…

The attack ended as abruptly as it started. The Japanese droned into the distance and vanished about three minutes after they’d been sighted. In front of the hangar, the mangled remains of eight airplanes raged aflame under roiling palls of oily black smoke – three Curtiss Condors, the three Eurasia planes, and CNAC’s two DC-2s. Another greasy smudge jetted skyward from the ruins of the Pan Am clipper. The Royal Air Force’s contingent of pathetic biplanes – three Vildebeast torpedo bombers and two Walrus Amphibians – burned at the other end of the field. 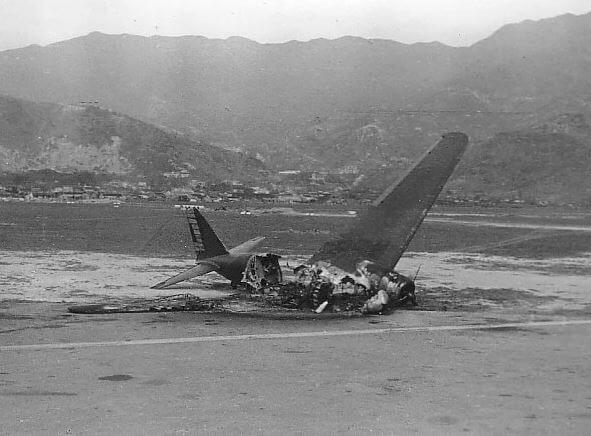 One of the DC-2s destroyed by the attack

This article was first posted on 6th December 2015.