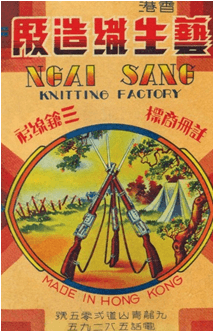 From the 1930s to the 1960s, Ngai Sang Knitting Factory was one of the big four manufacturers of singlets (amongst over 70 of them at its peak in 1949) in Hong Kong alongside Chow Ngai Hing, Chuen Sun and Lee Kung Man (first two covered earlier in the group, last one to be covered later). Founded in HK in 1929, Ngai Sang’s founder Shum Sung-fai (岑崇輝) was originally in the export import business in Southeast Asia, which was also Ngai Sang’s primary market (especially the Philippines, Thailand and Sandakan). The brands marketed by Ngai Sang included “Three Rifles” (三槍, registered in 1940), “BBB” (registered in 1936), “Motor Car” (自由車, registered in 1935) and “Binoculars” (千里鏡, registered in 1931). The original plant of Ngai Sang was located at 36-44 Nullah Road in Mongkok, not far from the plants of Chow Ngai Hing and Chuen Sun.

In 1949, the firm built its new factory on 205 Castle Peak Road. According to an article about the plant in Wah Kiu Yat Po on April 29, 1952, the plant had around 100 workers and was capable of producing 200 dozen singlets per day. However, due to the loss of the mainland market after 1949 (which accounted for 40% of the industry’s sales in the past) and import controls in the Philippines, the firm was suffering like the rest of the industry and was producing at around half the capacity.

As a firm, Ngai Sang Knitting was incorporated in 1932 and dissolved in 1971.

This article was first posted on 27th November 2017.