Neil Pryde, the man, arrived in Hong Kong in 1963 to work as a sailmaker. In 1968 he represented Hong Kong at the Mexico City Olympic Games and in 1970 set up Neil Pryde the company.

Neil Pryde Ltd was primarily a sailmaker, supplying sails mainly to yacht builders in Europe. With the emergence of moulded glassfibre hulls the boat building business was going through a period of record growth and the resulting demand for sails greatly assisted the company in becoming the world’s largest supplier of sails to the yachting industry.

The first Neil Pryde manufacturing facility, or a ‘sail loft’, was set up in 1970 in Fanling, Hong Kong. I believe the above photo shows this factory.

Currently Neil Pryde Ltd (Pryde Group) is a Hong Kong based Sports Group. It’s  a privately held company – a partnership between Mr. Neil Pryde and the Shriro Group. It operates factories in China and Thailand but no longer in Hong Kong.

IDJ sent in this photo of windsurfing sails being made. He thinks it is probably a Neil Pryde factory. (The original one in Fanling?) Can any windsurfers confirm that the red logo seen towards the top of the nearest sail is indeed a Neil Pryde sail?

And can anyone send further information about the company in Hong Kong. 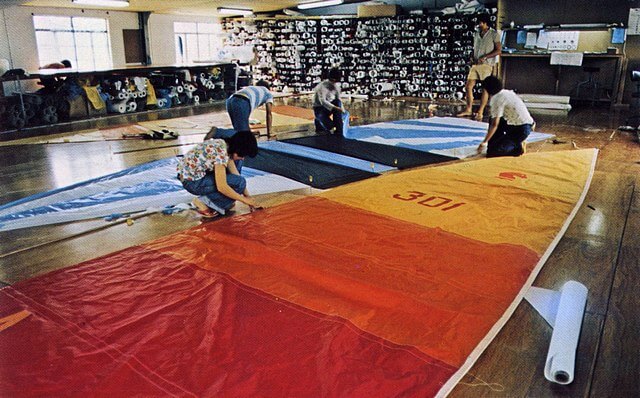