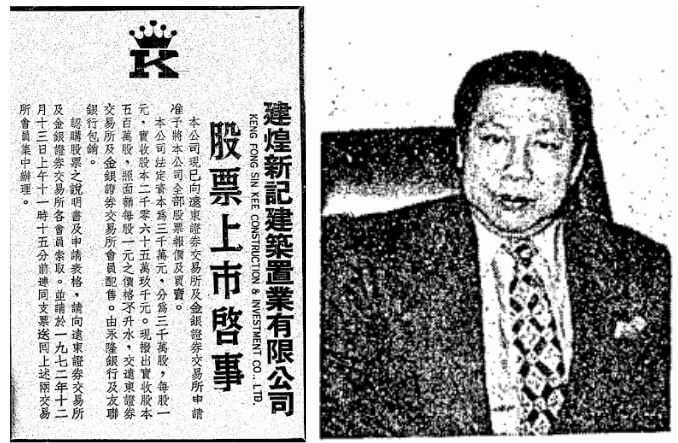 While many credit Allan Zeman for turning Lan Kwai Fong into the entertainment hub it is today with the launch of his California Bar in 1983 and much has also been written about Gordon Huthart who opened his popular club Disco Disco and Giacondo Mauro Mauriello who opened his Borsalino boutiques and Italian restaurant in the area five years earlier in 1978, little has been written about Kong Tak-yan, a colorful real estate pioneer who built the first dining, retail and commercial complex in the area – his namesake Tak Yan Commercial Building (acquired by Zeman in 1992 and renamed California Tower) at 30-32 D’Aguilar Street back in 1973 which began the transformation of the area from an alley filled with flower hawkers and matchmakers to an entertainment destination. Today, Kong is largely forgotten but back in the 1950s through the 1980s, he was one of HK’s most famous businessmen with business interests and connections stretching from Taiwan to the Middle East and his businesses ranged from real estate development, construction, electronics, newspapers, mining, restaurants, schools, movies to one of the first supermarket chains in the city. He was also a noted philanthropist and well-known figure in the local football circle. The logo of his listed Keng Fong Sin Kee (建煌新記) group was a letter K with a crown on top and Kong, whose nickname was the “Pharaoh”, was a king.

Family background and development in the 1950s and 1960s

The Kong family are natives of Weiyang in Guangdong province and Hakkas by descent. The second son with six siblings, Kong Tak-yan grew up in Malaya where his father Kong Ying-loy (江英來) was a mining engineer although his roots were in Hong Kong as his mother came from the Tse family in the New Territories and his older cousin Kong Chit-wong (江捷煌) was a pioneer in the construction and real estate industry in HK who had served on the inaugural board of the Tung Wah Group of Hospitals in 1932. Chit-wong founded Keng Fong Construction (the second character of the firm was likely after his name) in the 1920s and its office in the 1950s was located in the HK Hotel building in Central (WKYP, 1956-5-22) After Chit-wong’s death, Keng Fong was led by his widow Kwok Chun (郭珍) and his two sons – Kong Woon-man (江煥文) and Kong Woon-ho (江煥豪). This branch of the Kong family remained active during the 1950s – in 1955, Kong Woon-man opened the Edinburgh Restaurant (愛丁堡餐室) at 210 Prince Edward Road in Kowloon. In 1957, Kong Mo-sum, the fifth daughter of Kong Chit-fong married Chan Kwok-wai, a Canadian law graduate working at law firm of Hon & Co and brother of entertainment tycoon Chan Kwok Kit. (WKYP, 1957-9-7) In 1958, Keng Fong developed a residential mansion at 11 ½ mile Castle Peak in New Territories and the opening ceremony was attended by other leading figures in the real estate and construction business at the time including Edward T.T. Chan and Cheung Chan-hon (see articles) and Ip Ching-ping. (WKYP, 1958-10-21) 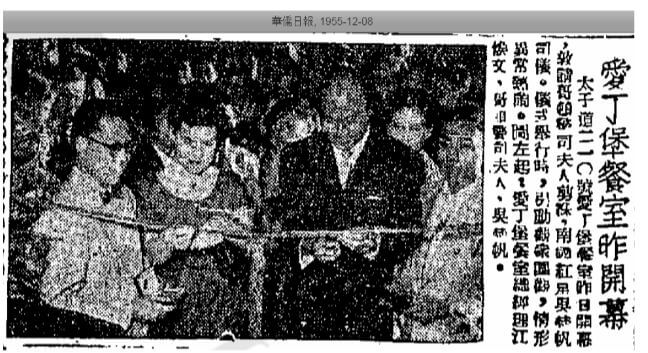 Kong Tak-yan returned to Hong Kong and founded Keng Fong Sin Kee Construction (Sin Kee which means “new firm” is perhaps to differentiate from his cousins’ firm) in 1949 and Taksoon Investment Co (德山企業). By the mid-1950s, Kong Tak-yan was more famous than his cousins, having served as a director of Tung Wah Group of Hospitals in 1956 and Po Leung Kuk in 1957.

In 1966 when Kong was visiting Malaysia as vice chairman of the Malayan Association of Hong Kong, he mentioned he was involved in 6 property development projects in HK at the time, four of which are 14 story residential buildings (100 units each) near Hong Kong University in Pokfulam costing over HK$10 million and the remaining two include a 16 story building in Kowloon (first two floor retail and remainder residential) and ten 4 story residential units in the Mid-Levels each selling for HK$300,000.  (Nanyang Siang Pau, 1966-9-3) 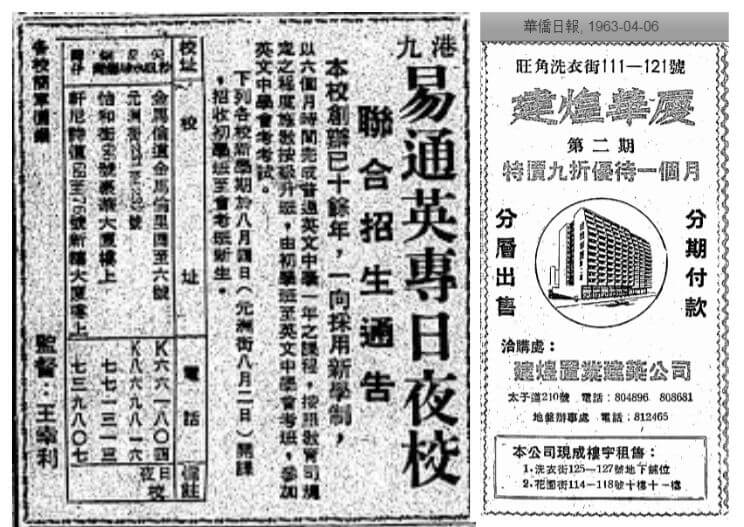 Aside from HK real estate, Kong Tak-yan also extended his reach to other areas in the 1950s and 1960s. Outside of HK, he invested in real estate and industries in Taiwan and Malaysia. Aside from housing, the massive influx of refugees from the mainland also drove up the demand for education which the government and nonprofit institutions were unable to meet, creating a market for affordable private education in the 1950s and 1960s. In 1954, Kong backed Henry S.L. Wong (王幸利, d. 1976), a fellow Malaysian Chinese from Ipoh to start Eton English Tutorial School (易通英專) in Hong Kong to provide secondary school level English classes. Kong served as chairman of the school while Wong served as supervisor. The original school was located at 4-6 Cameron Lane in Kowloon starting with a few hundred students. It was a hit and soon branches were opened in Sham Shui Po, Wanchai, Causeway Bay and Yuen Long and by the mid-1960s the chain of schools had over 5000 students. Aside from serving as Tung Wah director and chairman of the HK Malayan Association, Henry Wong was elected Urban Councilor from 1969 to 1973. His brother Wong Chi-ping was an actor better known for his stage name Peng Peng and was known for playing the pig in Shaw Bros’ Journey to the West films in the 1960s.

In the late 1960s, early 1970s, Kong Tak-yan extended his reach to Indonesia where he owned 90% of a copper mine in Indonesia which began production in 1969 and also developed a 800 room hotel in Jakarta.

In late 1972 during the height of the stock market bubble, Kong’s Keng Fong Sin Kee Construction & Investment Co Ltd (incorporated in 1965, hereafter refer to as KFSK) became a listed company on the Far East and Kam Ngan stock exchanges with registered capital of HK$30 million, which was soon expanded to HK$100 million.

Opening of the Tak Yan Commercial Building and Keng Fong supermarket in Lan Kwai Fong in 1973 with picture of Kong Tak-yan unveiling the building’s plaque (KSEN, 1973-12-18)

The crown jewel of the KFSK empire however was the 17 story Tak Yan Commercial Building on D’Aguilar Street on a 46,470 sq ft site, which was estimated to worth $35 million. (KSEN, 1973-2-19) For whatever reason, Kong saw potential in this harder to reach area in Central and to drive traffic, Kong opened the Keng Fong Restaurant (建煌餐廳) and Keng Fong Supermarket (建煌超級市塲) in the building complete with the first multi-color water fountain in Hong Kong. The opening ceremony in December 1973 was attended by over 3000 guests.

Aside from the Lan Kwai Fong building and the 4 projects mentioned above, KFSK was also involved in 9 other projects in 1973, including the development of the 14 story Kam Tong Mansion (金唐大廈) at 139-153 Belcher Street (earning profits of HK$3 million), Tse King House on On Ning Road in Yuen Long, a 6 story Chinese tenement building on Shanghai Street in Mongkok, 14 story Lok Fun Mansion in Knutsford Terrace, 6 story building in Queen’s Road West, 6 story building in Tai Wong East Street in Wanchai, Villa Dorada in Happy Valley, and projects on Inverness Road and Pak Ho Street in Kowloon. (KSDN, 1973-5-7) For the fiscal year ending March 1974, Keng Fong Sin Kee recorded profits of $4.7 million, a 25% increase from the prior years’ $3.8 million. In terms of projects, the firm had completed 224-226 Queen’s Road West and finished foundation work for a project at the intersection of Pak Ho Street and Fuk Wing Street (WKYP, 1974-7-27) 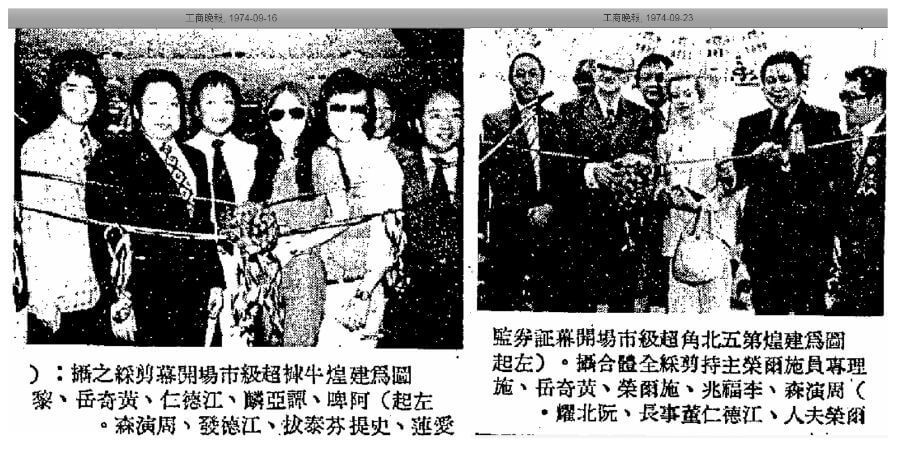 In the mid-1970s, KFSK extended its reach to the Middle East which was in the midst of a construction boom fueled by soaring oil prices. In October 1977, Keng Fong signed a contract in Taipei with a Saudi Prince to construct two large office buildings in Riyadh and Jeddah for his company. (KSEN, 1977-10-19)

Keng Fong Sin Kee in the 1980s and Beyond

In the early 1980s, Kong Tak-yan opened Large Enlarge Gold Dealer (巨展金號) to deal in the booming gold market with offices at the top floor of the Tak Yan Commercial Building. Large Enlarge Investments was formed in 1980 to deal in stocks and a branch was opened in Yuen Long in partnership with the powerful Tai brothers – Tai Kwan (戴均) and Tai Kuen (戴權) in 1981. (KSEN, 1981-3-3)

Unfortunately, KFSK suffered losses in the next couple of years. In December 1986, Kong Tak-yan announced plans for Keng Fong Sin Kee to dispose of the investments in Hawaii, Malaysia and Taiwan worth over HK$156 million to re-deploy the assets in HK as he regained confidence in the local market and at the meantime also sold its 45% stake in Kwan Lee Construction to the Yu family who owned the rest of the firm for HK$15 million (WKYP, 1986-12-25)

Kong Tak-yan (second from left) as president of the 100 Club presenting a $5000 check to representative of the HK Police for the benefit of the widow of policeman Mok Yiu-wah (莫耀華) who was killed in a LP gas explosion in Causeway Bay in 1974. Alec Wong was to his left (KSEN, 1974-7-17)

Aside from KFSK and other businesses listed above, Kong was also a newspaper publisher in the late 1970s early 1980s having bought Far East Economic News, a business newspaper started by comic book publisher Jademan Wong and later merged it with the tabloid Hung Look Daily (紅綠日報) but the combined publication ultimately failed. Outside of business he was noted for his philanthropy and long-time involvement in the football circle, having served as chairman of HK Football Referees Association and football department head of the South China Athletic Association and have led the HK team and Republic of China team in international matches. Politically savvy, Kong was simultaneously a director of Kong Toi Trading Co, a window company of the Taipei regime in HK and at the same time he was appointed by the Beijing regime to the executive committee of the Basic Law Drafting Committee.

In March 1988, Kong Tak-yan died of cancer at the St Paul’s Hospital in HK at the age of 68 (although in 1966 he was listed as 41 years old). His pallbearers include legislator Lo Tak-shing, tycoon Cheng Yu-tung, Huang Wenfang (黃文放) of the Xinhua News Agency and Tsung Tsin Association head Wong Shek-wa, highlighting his wide network of friends. (WKYP, 1988-3-19) Two months later in May, Tak Yan Commercial Building was sold for HK$54.5 million.

After Kong Tak-yan’s death, his daughter Sally and son in law Johnny Lee ran KFSK while Sally’s half-siblings Phyllis M.Y. Kong (江敏兒) and Kong Man-ling (江敏玲) were also on the board until 1995 when they were forced out by Ambrose Chan (陳恒輝) who had acquired majority control of the firm and as a result KFSK was renamed Heng Fung Holdings (恒鋒集團) and eventually became ZH International Holdings after it was acquired by mainland interests in 2015.

As for Tak Yan Commercial Building, it was acquired in 1992 by Allan Zeman and renamed California Tower. Zeman had acquired the neighboring Yat Fung Building (日豐大廈, likely from former CMA chairman Ngai Shiu-kit whose Euro-Asia Engineering was located there and also ran Yat Fung Developments, see article) at 34-36 D’Aguilar Street in 1988 which he renamed California Entertainment Building.

This article was first posted on 20th September 2019.