York Lo: From Tea to Real Estate and Soy Milk and back to Tea – the six-generation saga of the family of Kwan Fan-fat

Group picture of the Kwan family at the wedding of Kwan Fan-fat’s youngest son Kwan Kam-pui at the Kam Ling restaurant in Kennedy Town in 1949 (WKYP, 1949-7-10)

Earlier on our website, we covered real estate pioneer Pang Kwok-chan, who was involved in the development of the three landmark projects – Central Building (中建大廈) in Central, Man Wah Sun Chuen (文華新村) in Jordan waterfront and Fontana Gardens (豪園) in Tai Hang. One of his key partners in all three projects was Kwan Fan-fat (關奮發, 1897-1983), whose family has been involved in the tea business for six generations starting with his grandfather. In addition to tea and real estate, the Kwan family was also involved in East Asia Food Products Co, the manufacturer of B-8 soy milk and Tru-Ade orange drink in Hong Kong in the 1950s and 1960s.

Natives of Kiukiang in Nanhai prefecture in Guangdong, the six-generation saga of the Kwan family began with Kwan Ning-tai (關寧泰) who established his tea business in 1838. At the age of 13, Ning-tai’s grandson Kwan Fan-fat entered the business and began working in the tea fields of Wuyi Mountain (武夷山) in northern Fujian province.

In the early 20th century, Kwan Fan-fat moved to Hong Kong where he established Tung Mow Tea Company (同茂茶棧, in 1954 its address was listed as 219 Des Voeux Road West), exporting tea from the mainland to the Southeast Asian market and beyond. He also ploughed his profits from tea into real estate and established Hing Fat Land Investment & Loan Ltd (興發置業) which was incorporated in 1924 and developed Hing Fat Building (興發大廈) at 8-10 Duddell Street, which was and later re-developed as the 25 story HK Diamond Exchange Building in 1981. When the Sino-Japanese War interrupted the supply of tea, Kwan shifted his focus to the real estate business and became a major player in the real estate business in the 1950s and 1960s as chairman of Montana Lands (文華地產, developer of Man Wah Sun Chuen) and Fontana Estates (豐華地產, developer of Fontana Gardens), director and treasurer of Central Development Ltd (中建企業,developer of Central Building) and managing director of Sang Lee Investment and Hing Fat Land.

The two key partners of Kwan in his various real estate ventures were Pang Kwok-chan (see article about the Rise and Fall of the Goodyear Group for details) and a former law firm clerk and interpreter by the name of Mok Tsze-Fung (莫子峰, T.F. Mok). Mok as vice chairman of Central Development (chairman was the shipping magnate Hui Oi-chow whose family currently controls the firm) was the mastermind behind the Central Building which was built in 1957 on the former site of the Hong Kong Hotel and in 1960, he led the establishment of Sang Lee Investment (生利置地, no connections to Sang Lee & Co the contractor) with Kwan as the lead investor and supported by other prominent businessmen such as preserved ginger magnate Ma To-sang (馬道生) and Hudson Chen Wood, the proprietor of Tabaqueria Filipina (福和煙公司) who were directors of the firm. Sang Lee operated out of the top floor (17th) of the Central Building and was responsible for at least two large residential projects in Kowloon and HK island in the 1960s.

On the Kowloon side, Sang Lee acquired the former Kowloon head office of HK Telephone at 525-543 Nathan Road for HK$9 million in August 1962 – at the time of the transaction the plan was to build a 24 story building with total investments of HK$20 million and projected profits of HK$12 million (KSDN, 1962-8-13)  and re-developed the site into the 21-story Bell House (寶寧大廈) with Andrew K.F. Lee (李景勳) as architect.

On the HK side, Sang Lee acquired a 50,000 sq ft site on King’s Road (993-997) in North Point from the British firm of Davie Boag in late 1961 and commenced the plan to re-develop the site into a residential complex with thousands of 400 sq ft flats, which buyers could purchase with monthly payments of $300 for 5 years at 6% interest rate. As the Chinese name of Davie Boag is “Tak Wei Po” (德惠寶), Sang Lee named the three buildings – Tak Lee (德利大廈), Wai Lee (惠利大廈) and Po Lee (寶利大廈). (WKYP, 1962-2-8) For a myriad of reasons, these buildings were not completed until the late 1960s and a legal dispute between Sang Lee and one of the syndicate investors, Chu Kwai-tim exposed the inner workings of Sang Lee’s property development. As a firm, Sang Lee Investment was dissolved in 2004. 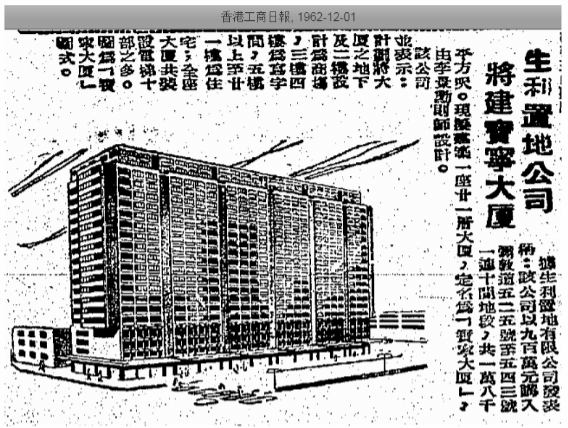 Kwan Fan-fat had four sons and he was predeceased by his third son Kwan Koam-pui (關鑑培). The eldest son Kwan Kwong-pui (關廣培) was a graduate of Lingnan and studied in Ohio and Michigan in the US in the 1930s. The youngest son Kwan Kam-pui (關錦培) married Wong Hing-yee, the sister of a Canton merchant in 1949 and later served as director of Fontana Estates and was one of the pallbearers of famous socialite Kwan Pui-ying (wife of high-ranking police officer Szeto Che-yan) in 1975. In 1971, Kam-pui’s son Kwan Lai-man (關澧文) married Ko Ling-yee (高令儀), the third daughter of Ko Fook-wing J.P. (高福永), Cambridge-trained solicitor (co-founder of the law firm of Lau, Chan & Ko) and the eighth son of Ko Ho-ning (高可寧), the king of pawnshops and major landlord.

Kwan Fan-fat’s third son Kwan Hok-pui (關學培) also went to Lingnan and worked at Vitasoy as factory manager before launching rival beverage manufacturer East Asia Food Products in 1952 with the financial support of his father and other prominent business figures such as the banker and politician Sir Sik-Nin Chau (see article on Sik Yuen and Susan Yuen) and banker Huo Pao-tsai (霍寶材,1909-1987), both of whom had served as chairman of the firm. The eldest son of Fok Chi-ting (霍芝庭, 1877-1939), the owner of the gambling concession in Kwangtung province during the 1920s and 1930s, Huo ran the Bank of Canton in HK (later acquired by Security Pacific in 1988) and built Hotel Grande in Macau and was a noted antique collector as president of the Min Chiu Society. Huo was also an in law of Kwan Hok-pui as his son Rex Huo Wai-chiu (霍偉釗 1937-2014) married Kwan’s daughter Bonnie Kwan (關天穎, painter, president of Zonta Society and chair of HKU Museum Society).

East Asia built a 2-story plant at 505 Castle Peak Road in Cheung Sha Wan designed by the architect Chau Iu-nin, constructed by Wing Lee & Co (see article on Tam Shiu-hong) and equipped with state-of -the-art bottle washing machines, water filtration system and boilers. The first product launched by East Asia was a soy milk product called B-8 Milk (“衛力奶”), one of the first competitors to the popular Vitasoy in the HK market. To promote B-8, Kwan recruited some of the top salesmen from Vitasoy and employed an aggressive marketing strategy which involved giving out free bottles in the top movie theaters, sponsoring sports events such as dragon boat races and outdoor and print advertising. Unfortunately, B-8 was unable to compete with Vitasoy and faded into history after few years of operations. 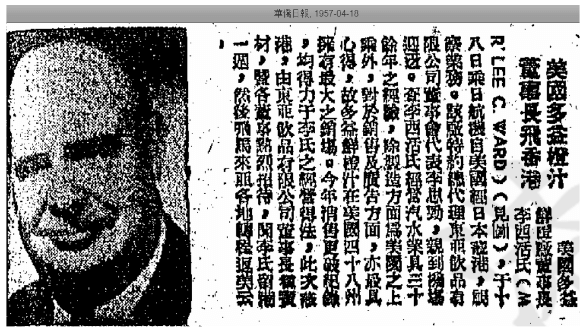 In around 1955, East Asia became the Far East distributor and bottler of Tru-Ade (多益橙汁), a non-carbonated orange soft drink developed by Lee C. Ward in Los Angeles in 1938. In 1957, Tru-Ade founder and president Lee C. Ward visited Hong Kong and was greeted by P.T. Huo and team. Over time Tru-Ade declined as a brand and as a firm, East Asia Food Products was dissolved in 1973.

In addition to the real estate ventures, the tea business and East Asia, Kwan Fan-fat was also a partner in Wah Cheong Loong Store (華昌隆士多), was incorporated in 1958 but dissolved within 3 years in 1961, with Chan Nam-cheong, Cheng Chung-kwan and Chan Kai-hong (the first two were co-owners of New Taxicab Co, see article about the Four Taxi Kings). He was the co-owner with Chan Nam-cheong and Chan Kai-hong of the racehorse “Golden Dahlia” (金芍藥), which won the 1949 HK Derby (KSEN, 1949-2-13) and maintained his residence at 2 Peak Road. In October 28, 1983, Kwan Fan-fat died in Hong Kong (TKP, 1983-11-3)

The Fifth and Sixth Generation: Return to Tea 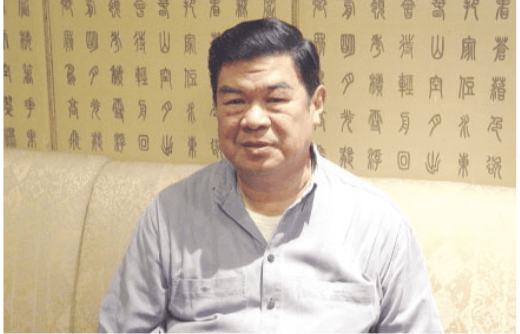 Thanks to the advocacy of the elderly Kwan Fan-fat, the State Council in the mainland authorized the launch of the Overseas Chinese Tea Research & Development Foundation (华侨茶业发展研究基金会) to promote the research & development of China’s tea industry in September 1981 and Kwan donated HK$3 million towards its establishment and served as its inaugural vice chairman. Even months before he died in 1983, he contributed an additional $1 million towards the foundation in May (TKP, 1983-5-26) and mailed a basket of Liu-An tea (六安茶) made in 1909 from his personal collection to the state-owned Anhui Tea Company and helped them resume production of the blend of tea that had ceased production in China from 1940 to 1984.

The same year the foundation was founded, Fan-fat’s grandson Kwan Pok-man (關博文, 1946-2009) incorporated Ning Tai Tea Company (寧泰茶莊, dissolved in 2003) in HK to deal in tea, named in honor of his ancestor. In 2005, Ning Tai established a trading subsidiary in Shenzhen with a focus on exporting Pu-Er tea to HK and overseas markets such as Korea. The family also opened a tea shop inside the Shangri-La Hotel in Shenzhen to promote the art of drinking tea. In addition to running the tea business, Kwan Pok-man also ran the Overseas Chinese Tea R&D Foundation as its chairman. Sadly in 2009 he died unexpectedly of a heart attack but his son Kwan Wai-hong (關維康) picked up the baton and became the sixth generation in the family to be involved in the tea business.

Sources other than what is cited above:

This article was first posted on 2nd August 2019.