In August 1971, shockwaves were sent across Hong Kong when Edmond Ip Wing-cheong, the 41 years old industrialist and community leader suddenly disappeared. Awarded the MBE for his community service by the Queen the year before, Ip was chairman of the city’s leading Chinese charitable organization Tung Wah Group of Hospitals and a senior leader of the Scout movement in HK with diverse business interests ranging from garments, rubber shoes, trading, construction to stock brokerage and at least four factories in Hong Kong.

The Rise of the Young Industrialist and Community Leader

A native of the Hoiping district in Guangdong province, Edmond Ip was born in HK in 1930 and attended Wah Yan College. In 1955, the 25 years old Ip (whose address was listed as 2 Moon Street) incorporated W. Ming Weaving Manufactory (永明紡織) with HK$200,000 in registered capital at 1043-1045 Tung Chau Street (also known as New Kowloon Inland Lot 3547) in Lai Chi Kok. (Far Eastern Economic Review, 1956). While W.Ming manufactured a variety of cotton products under its registered “Wykon” trademark such as cloths, nettings, towels and terry square, it achieved the greatest success in the niche business of making mesh bags for packaging of produce and other goods. By 1962, W.Ming was shipping tens of millions of mesh bags to the UK through a firm in East Suffolk that was a leading distributor of agricultural related products in the UK and had factories in Lai Chi Kok, To Kwa Wan at 21-23 Sheung Heung Road and Tsuen Wan at Tsuen Wan Inland Lot 46. (WKYP, 1962-10-25)

Following the success of W.Ming, Ip expanded into other businesses. He and his wife Graciela Loo Wai-hing incorporated Edmond, Graciela & Co Ltd. (永興有限公司) in 1958 with $50000 in capital  to engage in import export trade and its address was listed as 56 Flower Market Road. In addition to his wife, Edmond was also supported in his businesses by his brother Ip Ming-cheong (葉銘昌). 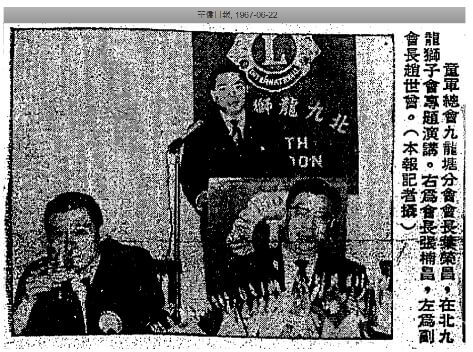 Edmond Ip delivering a speech about the Boy Scouts at the Lions Club of North Kowloon in 1967. To his left was Cecil Chao (see article on HK Food Products) who was vice president of the Club and to his right was Shanghainese textile industrialist N.C. Chang who was president of the Club. (WKYP, 1967-6-22)

In 1960, Ip incorporated Scienex Industrial (永信工業製品) to make rubber sandals, mules and boots (International Rubber Directory, 1967) which was a popular industry in HK at the time (for other players in the industry, see the many other articles on firms such as Fung Keong and Wilman). Scienex had its factory at 10 Tsun Yip Lane in Kwun Tong. (Red Book, 1969)

In 1962, Ip incorporated World-Mart (HK) Enterprises Ltd (天順(香港)有限公司) and in 1966, he entered the real estate and construction business via the establishment of Everwin Construction Co. Ltd (永順建築). By 1967, he was also a director of the well-established liquor distributor Gande Price (源和酒行, see article) in addition to serving as managing director of the various businesses listed above which he managed out of his corporate office at the Marina House in Central. His businesses had subsidiaries in the UK, the US and Germany and he traveled extensively across US, Europe and Japan for business.

In the 1960s, Ip also emerged as a community leader the same time as his business empire grew. He joined the Tung Wah Group of Hospitals as a director in 1964, rising to principal director in 1965 and becoming chairman in 1968. in  In addition to Tung Wah, Ip was also South Kowloon Area and Kowloon Tong district president of the HK Boy Scouts, vice president of the Lions Club of North Kowloon, director of the Hoi Ping Chamber of Commerce, honorary life president of the Tsim Sha Tsui Kaifong Welfare Association, Chung Sing Benevolent Society and HK Sze Yap Commercial & Industrial Association, vice chairman of the South China Athletic Association and honorary treasurer of the Wah Yan Past Students Association. All this culminated in him receiving the MBE in 1970. (WKYP, 1967-4-1; HK Album, 1967)

In 1969, a landmark event in the history of the HK stock market took place when Ronald Li and a group of businessmen formed the Far East Stock Exchange, which broke the monopoly of the clubby HK Stock Exchange and democratized the HK stock market. Sensing an opportunity, Edmond Ip entered the securities business by buying a seat on the New Exchange and established the stock brokerage Ip’s Company (葉氏證券) in 1970. When members of the HK Chinese Gold & Silver Exchange Society formed the Kam Ngan Stock Exchange in March 1971, Ip’s Co also joined as a member firm and Edmond Ip himself became a committee member of the Kam Ngan exchange.

Left: a document from an American brokerage firm hanging on the door lock of the offices of Ip’s Co after its sudden closure in 1971; Right: Edmond Ip smiling after he was found not guilty in 1977

In early August 1971, Edmond Ip and Miss Lam Wai-lai, one of the brokers at his firm both suddenly went missing and Ip’s Co closed its doors. Clients gathered outside Ip’s Co offices at the Realty Building and a report was made concerning his whereabouts to the Waterfront Police Station. The Kam Ngan and Far East exchanges both suspended Ip’s Co’s membership within days and ten customers formed a committee to seek compensation and went to the Legislative and Executive Council. Complaints were filed by three clients concerning financial transactions totaling more than HK$270,000 and a well-known broker allegedly had flown to Taiwan where Ip allegedly had fled to and tried to convince him to return. Far East Exchange chairman Ronald Li spoke to the press and urged the government to introduce proper regulatory framework for stockbrokers. (SCMP, August 1971; KSDN, 1971-8-6)

In the aftermath of Ip’s disappearance, his business empire in Hong Kong quickly crumbled. HSBC as creditor of W. Ming sent its representatives to take over the factory. In September 1971, HSBC appointed Lowe Bingham as liquidator to sell W.Ming’s equipment, vehicles, furniture, garment quotas, trademarks and other assets.  (KSDN, 1971-9-21) Warrants were issued for Ip’s arrest as he was suspected of defrauding investors of over HK$1.3 million.

After disappearing for six years, Edmond Ip resurfaced in Hong Kong in May 1977 to attend his father’s funeral. He was immediately arrested by the commercial crime bureau of the HK Police after his flight from Taiwan landed at the Kai Tak airport but was out on bail awaiting trial by posting $50,000 in cash and two guarantees of $500,000 and was required to report to the Happy Valley Police Station once a day before noon. (WKYP, 1977-5-22)

During his trial, Ip testified that he first went to Europe for vacation and then went to Taiwan in 1972. In October 1977, the Victoria District Court found Edmond Ip not guilty of the 17 counts of fraud he was charged with and he was immediately released. (KSEN, 1977-10-19)

In 1982, Edmond Ip re-emerged in the HK business scene as the chairman of Jackie Group from the UK and its HK-based affiliate Jackie China Development (積琪中國發展有限公司). He hosted an urban planning and civil engineering delegation from Shenzhen for a 12 day visit to HK in May of that year (TKP, 1982-5-7) and then in June visited Shanghai where he signed a memorandum of understanding on behalf of Jackie Group with the Ministry of Metallurgical Industry. (WKYP, 1982-6-2)