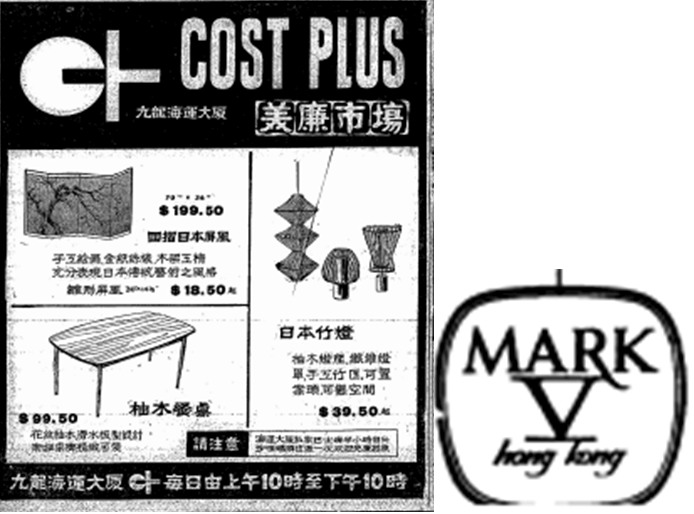 Left: Chinese advertisement for Cost Plus Bazaar at the Ocean Terminal in 1964 featuring some of the Japanese furniture. The store opened daily from 10 to 10 (WKYP, 1964-7-19)

American retailers, big and small, have been the key driving force of industrial development in HK and China for the past few decades as they seek to stock their shelves with low cost imports churned out by factories on the other side of the Pacific. One of the pioneers of this megatrend back in the 1960s was Cost Plus Bazaar (now known as Cost Plus World Market) out of San Francisco which shared common roots with the better-known retail chain Pier 1 Imports. Cost Plus established Mark V in Hong Kong which was not only the Far East sourcing agent for the chain back in the US but one of the largest candle manufacturers in HK at the time. Cost Plus also operated a store at the newly opened Ocean Terminal in the mid-1960s, one of the first American retailers.

Cost Plus traced its roots to Amthor Imports, a San Francisco importer which started selling rattan furniture and related products imported from the Far East since the 1920s (see article on HK rattan industry for more details about that business). In 1958, the founder’s son William Ramier Amthor (1909-1983) was faced with a surplus of rattan furniture so he and Lincoln Bartlett rented a 4000 sq ft warehouse in Fisherman Wharf and opened the first Cost Plus store to offer the surplus furniture and a batch of shirts from Hong Kong at low prices and self-service basis. The concept was a success and soon Cost Plus became a popular chain selling low cost imported items in the Bay Area. In 1963, Charles Tandy of Tandy Corporation started franchising Cost Plus in Southern California and Texas. Within 3 years, Tandy had 16 Cost Plus stores but bored with the idea and focusing more of his energy on Radio Shack, Tandy sold the interest inhis 16 Cost Plus stores to his treasurer Luther Henderson (1920-2002) in 1966, who renamed it Pier 1 Imports to avoid confusion with the Californian chain.

To source more merchandise from the Far East, Amthor engaged two Americans living in Hong Kong – Mark Broiles and his wife Olga who had established Mark V International Ltd as an import export business in 1959. Born in 1927, Mark Broiles was a film buff who together with a group of expats organized Studio One, a film club in 1962 which showed movies at venues such as the City Hall Theatre and lasted until the 1990s. Olga was a native of New Mexico who worked for Pan American Airways and served as the Asian buyer for Cost Plus.

The Broiles recruited Warner Fung (馮華納), a local who had studied business in Canada as general manager of Mark V and he brought with him interesting connections as his father Fung Shing-hum (馮乘堪), a mining and construction magnate had served as chairman of the Fung Family Association and was friendly with more famous clansmen such as Sir Kenneth Fung of Bank of East Asia and Fung Hon-chu of Li & Fung who both attended Warner’s wedding to Tai Man-kuen (戴文娟) in 1961.

In 1963, Amthor Imports had acquired control of Mark V and Amthor Imports HK Ltd was incorporated. Mark V also entered the business of making candles and in 1964, Cost Plus Bazaar opened a store in Ocean Terminal, selling interesting household items such as Japanese furniture at low prices. Japan, where Cost Plus had also established a branch, represented half of where the chain sourced its goods in the 1960s, followed by India. Through its HK branch, Cost Plus also explored buying mainland Chinese products at the Canton Trade Fair but found the prices and required order quantity too high.In 1965, the Broiles who had left for Italy were replaced by the 26 years old Alan Merle Sampson (1939-2013), a San Francisco native who was just became the head of Amthor in Japan the year before. Another key figure involved in the HK operations was designer Roy Ginstrom (1921-1971) who was involved in the designs of candles and other related products by working with artisans in the Philippines and India.

An article syndicated in the US press in 1968 described Mark V’s candle manufacturing operation in HK:

“MARK V International, one of Hong Kong’s biggest manufacturers, has been inundated with orders to the point where they find it difficult to cope with the demand. Yet only five years ago, Mark V’s candle factory was a dilapidated shack in the rural New Territories, employing a handful of workers. An inspiration to produce more elaborate figurine candles, the HK candlemaker wraps a “笑面佛”(Laughing Buddha) for shipment abroad. It is one of the new novelty candles – famous figures from Chinese legend as well as Western subjects brought the company world-wide recognition and, most important, orders. In all, Mark V’s factory has expanded 15 times and business has quadrupled in the past five years. Their annual sales are estimated at $300,000 yet despite phenomenal rise, the company still manages to adhere to its export quota. “We have”, explains Alan Sampson, managing director, “because we are selling in a very high market a market that only quality goods can penetrate.” America find the United Kingdom absorbed nearly three quarters of HK’s candles exports last year. It is in quantity that Hong Kong lags far behind Japan, explains the company’s manager, Warner Fung, who has been responsible for many of the candle designs, and who points out that “This is because Japan relies heavily on machines while we depend a lot on the manual touch.” Prices for HK candles are reasonable, but not cheap, Warner stresses. All the raw materials – parafin, wax and scents are imported, mainly from the United Kingdom, America and Indonesia. HK reputedly turns out more than 200 types of candles, ranging from the more mundane tapers and spirals to representation of Chinese deities and famous figures from Chinese mythology wax objects that are expected to top in exports this year. The more elaborate ones are used primarily for decorative purposes and are rarely lit, but if you are feeling extravagant, a Kwan Yin candlelight dinner provides just the right touch of opulence, and mystery. “

Cost Plus Bazaar HK was dissolved in 1968 while Amthor Imports HK was dissolved in 1969 and in 1972, Mark V International Ltd was renamed Milmar Ltd while Mark V International (1972) Ltd was incorporated.The same year, Warner Fung replaced Alan Sampson as head of Mark V/Amthor operations in HK and was later replaced by Ian Mack. Mark V remain a key player in the import and export of candles and rattan furniture to this day.

Back in the US, after Bill Amthor died in 1983, the company lost its direction and lost money for a number of years and in 1987 the Amthor family sold the 29-store chain to Bechtel Investments. In the 1990s, the chain was re-branded “Cost Plus World Market” and went public in 1996. The chain was acquired by Bed, Bath & Beyond in 2012 and as of 2015, had 276 stores across America, the fourth the size of its “sibling” Pier 1 which has over 1000 stores in the US and Canada. As for Alan Sampson, after he left Mark V/Cost Plus, he returned to the Bay Area where he worked in the insurance industry as senior vice president of ABD Insurance & Financial Services, and president of Insurance Associates of Northern California for 27 years before his death in 2013.

Ichaporia, Niloufer, Crazy for Foreign: The Exchange of Goods and Values on the International Ethnic Arts Market, University of California, Berkeley, 1980

This article was first posted on 10th December 2018.

And our posted articles focussing on an American link: