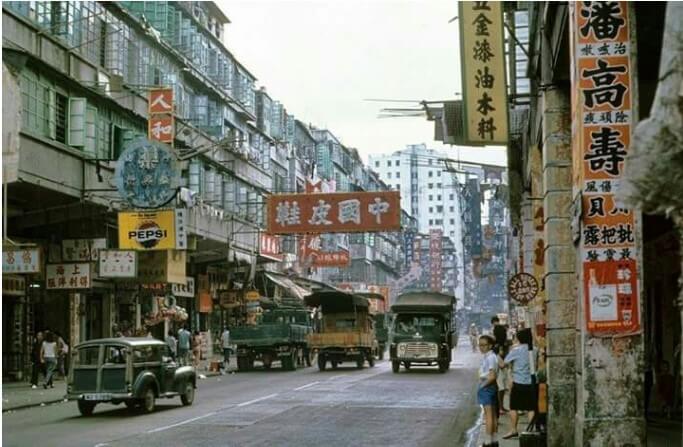 Earlier in the group, we have covered several popular shoe brands and chain of shoe stores in the 1950s and 1960s such as Crane, Po Shing, Sanda, Yau Sun and Fung Keong. China Leather Shoe Co was another popular chain of shoe stores from the same era which specialized in shoes imported from the mainland.

Although as a firm China Leather Shoe Co was not incorporated until 1958 with capital of HK$1 million, the business was started prior to that in 1955. One of its first stores was the one shown above at 29A-B Tai Po Road which was opened in December 1956 by movie star Ng Chor-fan （吴楚忛）and three others. The shoes were sold in the HK$10-20 range and in addition to shoes, it also sold other leather goods such bags, suitcases and jackets.

The firm was founded by a group of pro-Beijing businessmen with Ho Yin（何賢） the business and political leader in Macau (see article on Lynhall Land and Y.C. Liang) as chairman, Ho’s colleague in HK – Lau Hang-chung（劉衡仲） as director. The day to day operations however was managed by Sheh Hon-wai (佘漢偉), who was managing director of the firm and founder of the Federation of Footwear in 1970. Another key principal was leather trader Chow Hung-piu (周鴻標), a native of Shunde in Guangdong province whose Suen Yue Co Ltd (信裕有限公司) has been involved in the trading in a wide range of goods from hide and leather and fur to marine products such as sharkfin, fish maw, dried seafood to seaweed from South Africa. Suen Yue has its own Building at 48-48A Bonham Street West in Sheung Wan. 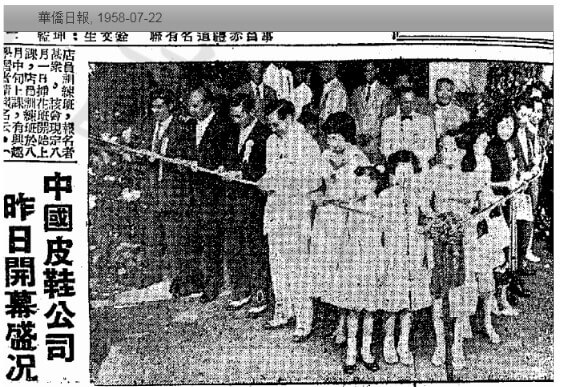 Movie stars cutting the ribbon at the opening ceremony of China Leather Shoe’s store on Nathan Road in 1958 (WKYP, 1958-7-22)

In 1960, the firm’s head office was listed as 3rd floor of 154 Des Voeux Road Central, a 4-story old building in Sheung Wan built in 1940 which still stands today.

In October 1962, China Leather Shoe opened its fifth branch at 367 Castle Peak Road – the opening ceremony was attended by movie star Cheung Ying, Lee Heung-kam（李香琴）, Tam Sin-hung（譚倩紅），Ha Ping, Yam Ping-yee （任冰兒）and others and guests and flowers were sent by the Canton Commercial Bank, Bank of China, Chinese General Chamber of Commerce, China Resources Enterprise, the publishers of pro-Beijing papers Ta Kung Pao and Wen Wei Pao and pro-Beijing Chinese products store and toy industry pioneer Wong Pui-kow (see article). China Leather Shoe maintained a close relationship with the many Chinese products stores that were formed in the 1950s and 1960s and in 1963, it opened a branch at Tsuen Wan inside the Chung Luen Chinese Products Co （中聯國貨）department store as shown below. 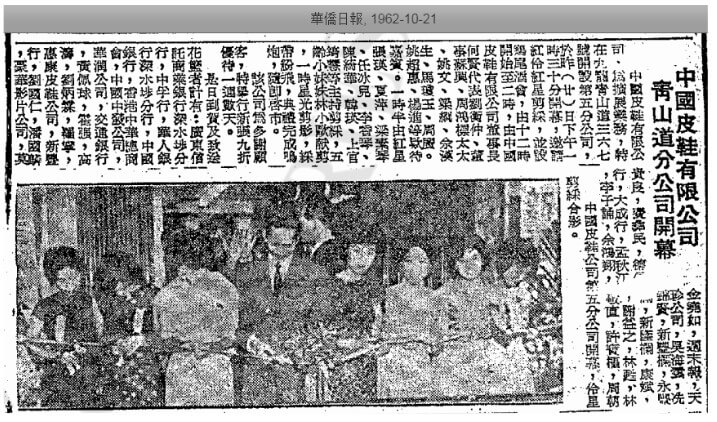 While China Leather Shoe faded away from the business scene, one of its principals Chow Hung-piu maintained a high profile into the 1980s as a philanthropist and business leader who had served as vice chairman of Po Leung Kuk and director of the Chinese Importers & Exporters Association, HK & Kowloon Raw Hide & Finished Leather Traders Association (now the HK Hide & Leather Traders Association) and Nam Pak Hong Association. His first wife Wong Wai-king died early so when he remarried in 1981 to Chan Lai-wan, he donated HK$200,000 to Po Leung Kuk in memory of his first wife in memory of his first wife.

In 1986, Chow donated another HK$200,000 towards the construction of a recreational facility in Wanchai (WKYP, 1986-10-4). The Po Leung Kuk Chow Hung Piu Day Care Centre for the Elderly (保良局周鴻標老人日間護理中心) in Tai Kok Tsui is named after him.

This article was first posted on 22nd November 2019.