This article is the result of initial research into industrial development and related matters on Cheung Chau Island.

If you can provide information on any of the subjects below, or add to the list, it would be good to hear from you. I can then gradually add to this framework to provide a fuller picture with an acknowledgment of your contribution.
Hugh Farmer indhhk {at} gmail [dot] com

HF: I am presuming this account of cleaning the bottom of boats is a form of breaming unless corrected.

Wat Wai Chun was born on Cheung Chau in 1923. This is an extract from her oral history: “Her mother was in the trade of mountain weeds, which her family ordered from the peasants on Lautau Island. Mountain weeds were grown by season in saline water and used for burning. The peasants made timely deliveries of the mountain weeds to Cheung Chau by boat. The Wats stored the mountain weeds they bought in their ancestral house. Other boatmen turned to them in Cheung Chau by boat to buy the weeds. On the 1st and 15th day of the lunar calendar, when the tides were high, the boatmen fixed their boats on shallow waters with thick ropes. When the tides were gone, the boats were stranded on the beach. Then the boatmen lifted the boats with wooden blocks for cleaning, and dried the bulks of the boats by burning mountain weeds. Tree oil was applied on the bulks to prevent the bulks from being attached by mussels and from being damaged by water fleas.”

HF:  “Throughout coastal southern China, smuggling and piracy have always dominated maritime activities.  It was not until controlling legislation on the registration of native craft was enacted and enforced in the late 1860’s that it became more difficult for pirates to operate in Hong Kong waters. The first man to survey Hong Kong waters using modern methods, the Bombay Marine Company Daniel Ross, reported in 1808 that when he went ashore on Cheung Chau to set up a triangulation station there were only two boat repairers resident as the island had just been devastated by pirates.” (Lost source)

Below: From http://gwulo.com/atom/22151 Slipways at the North end of the harbour. The shipyard was moved a bit further out into the harbour when the Pai Chong road was built.

These slipways have…become [a] … boatyard that… is now on reclaimed land. 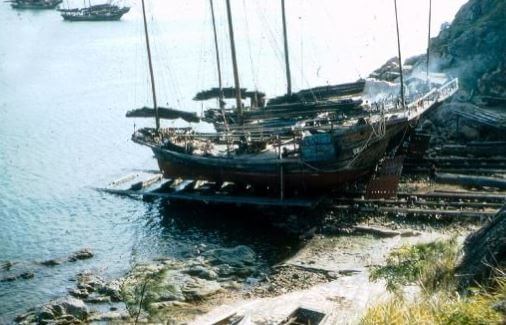 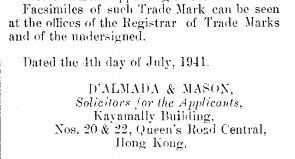 HF: Channels for what purpose?

Hong Kong Memory Project: Wat Wai Chun’s younger sister had a lonely life during the Japanese rule. There were no adults around to take care of her. Neither were there any companion of her age. She lacked a good learning environment and a stable life…At the time when Hong Kong was severely bombed, a bomb dropped on a cowhide factory in Cheung Chau.

IDJ: To obtain an electricity supply in Hong Kong customers have to sign up with either China Light & Power Co Ltd or the Hong Kong Electric Co Ltd. However, in the years before 1984 the residents of Cheung Chau Island were supplied from their own independent power station operated by the Cheung Chau Electric Company Co Ltd which had an office in Victoria… 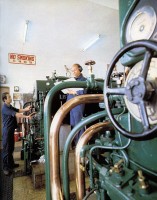 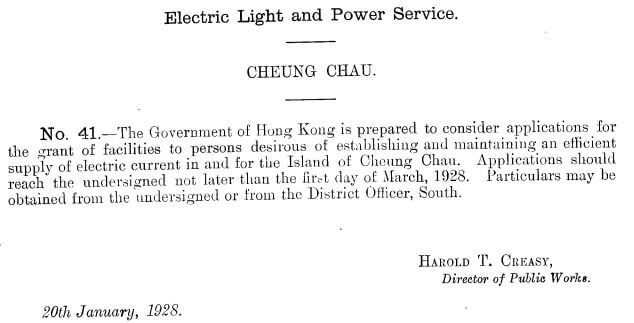 ER: This image of life on Cheung Chau was taken by my father Dr Lindsey Ride in the 1930s. It shows wares on the quayside ready to be loaded.

The buildings behind look rather like a factories. Can anyone indentify any of them and what went on inside? 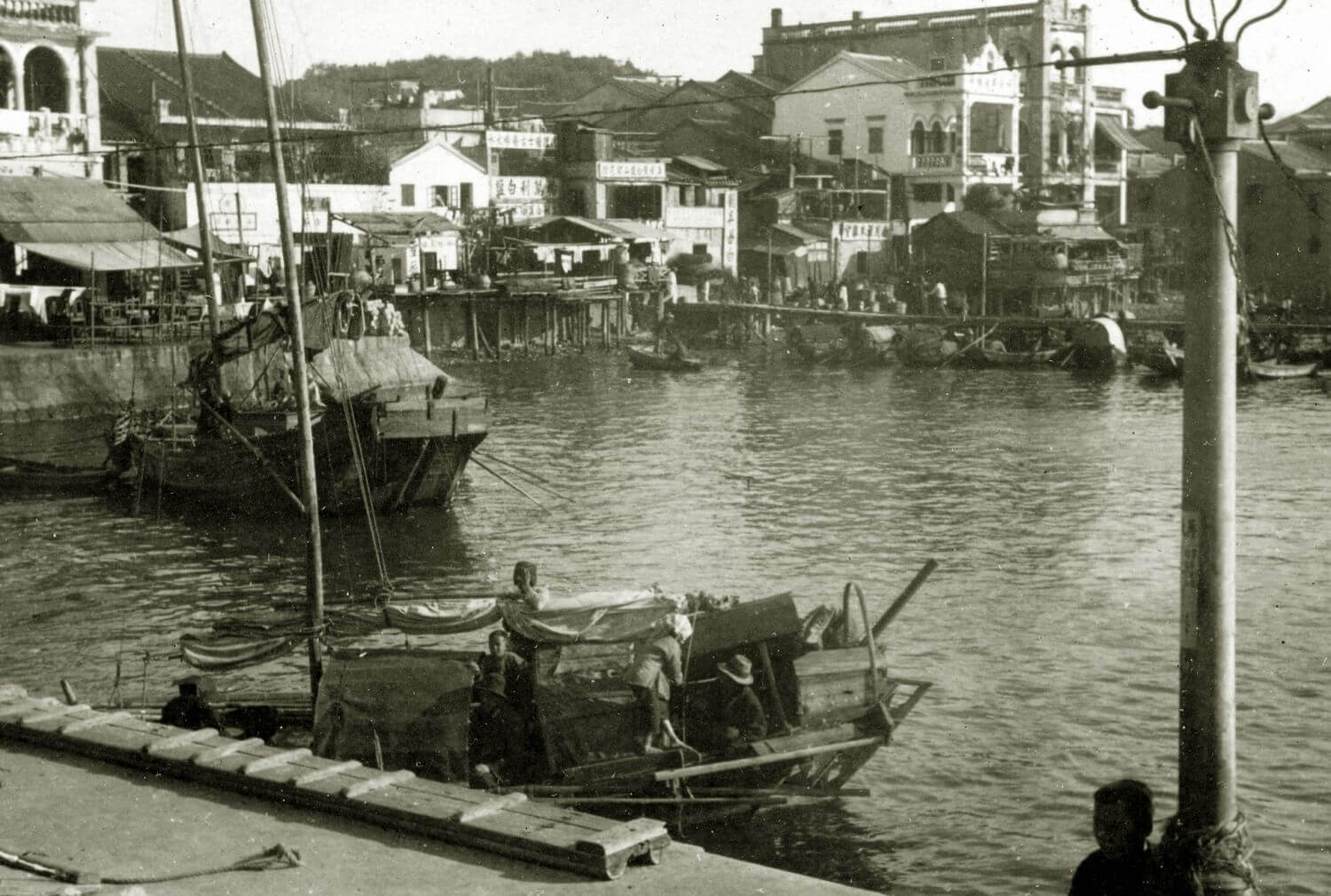 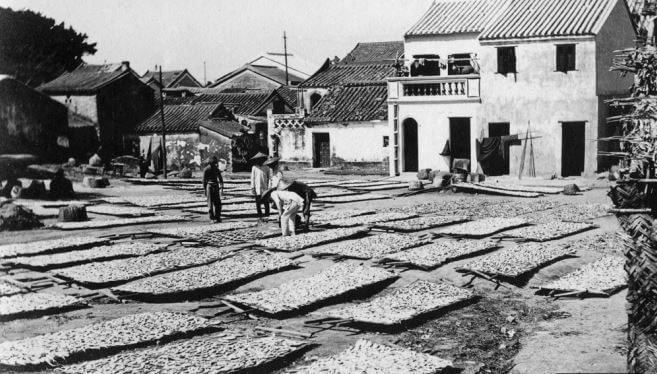 ER: This image of life on Cheung Chau was taken by my father Dr Lindsey Ride in the 1930s
It appears to show the drying of fish or shrimps. Can anyone verify what is shown here, both where the man is and the other collection to the right? 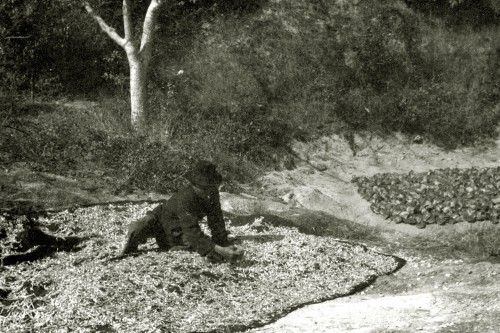 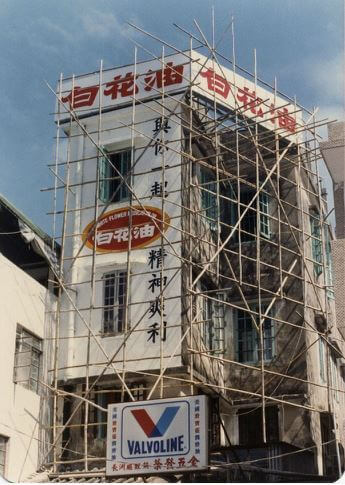 An advertisement of the products and services of the company: 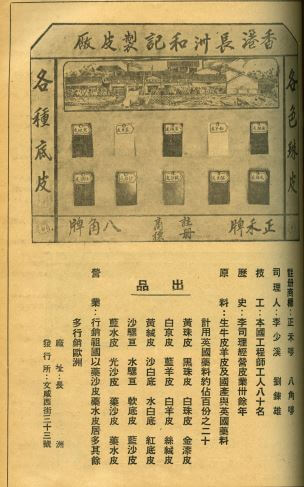 JH: There is further documentary evidence [of piracy] from the records of the Chinese Customs Station at Cheung Chau. L.C. Arlington of the Chinese Maritime Customs, who spent six years (1893-9) in charge of the Customs Station at Cheung Chau, wrote in his autobiography: ‘During my time in Kowloon territory (1893-1901), piracies were so common that we regarded it as extraordinary if a day passed without one. Indeed, it was the daily routine for junk masters to report at the Customs Station that they had been pirated and all of their cargo looted‘ (1) 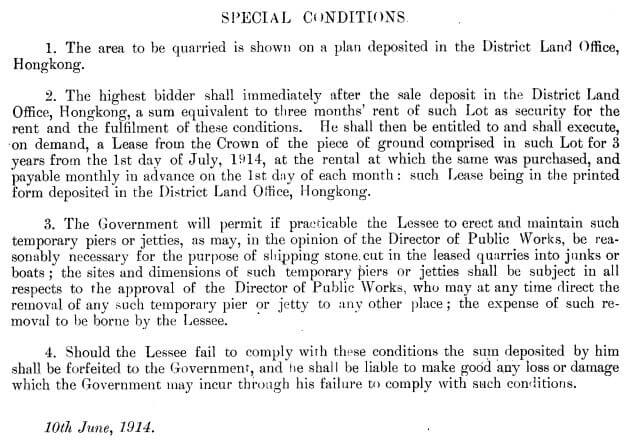 In September, 1983, a Cypriot freighter called ‘City of Lobito’ beached on Cheung Chau island after being washed ashore by Typhoon Ellen. 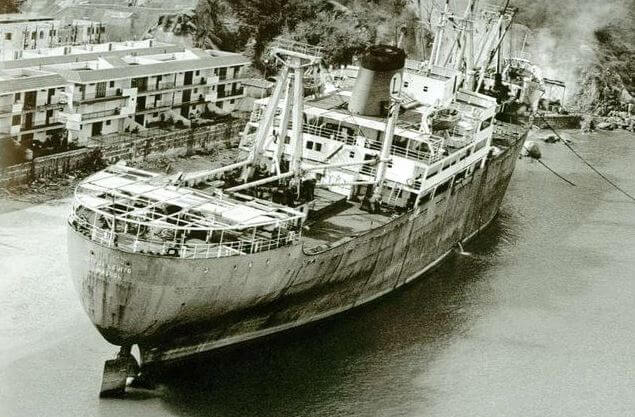 ER: This image of life on Cheung Chau was taken by my father Dr Lindsey Ride in the 1930s
It appears to show the drying of fish or shrimps. Can anyone verify what is shown here, both where the man is the other collection to the right?

HF: LC Arlington, the British expatriate employed by the Ching Dynasty as Imperial Maritime Customs Officer stationed at Cheung Chau between 1894-98, recalled a different aspect of life in his autobiography.  “The exceptionally strong smell from raw fish and shrimp paste under the sun was almost everywhere on the island.” This made it very difficult for him to set foot on the island again after 6 years of service on the island. (2) 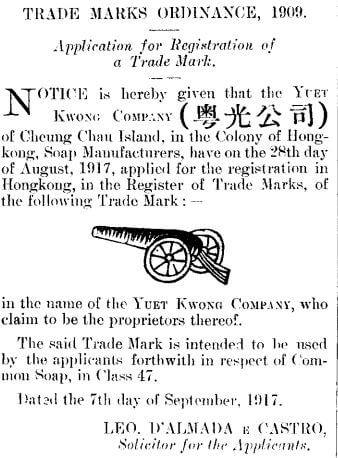 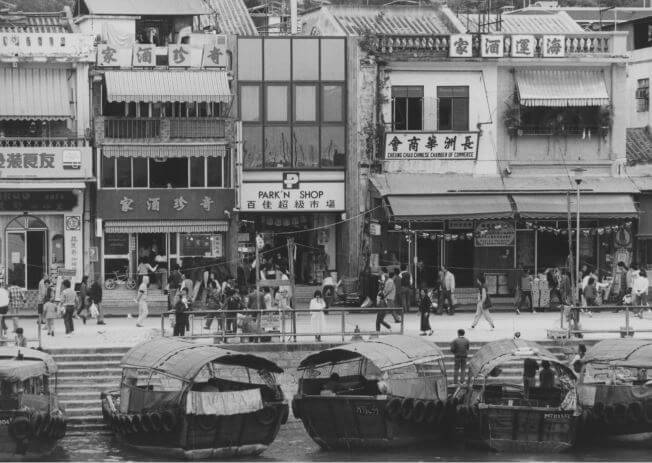 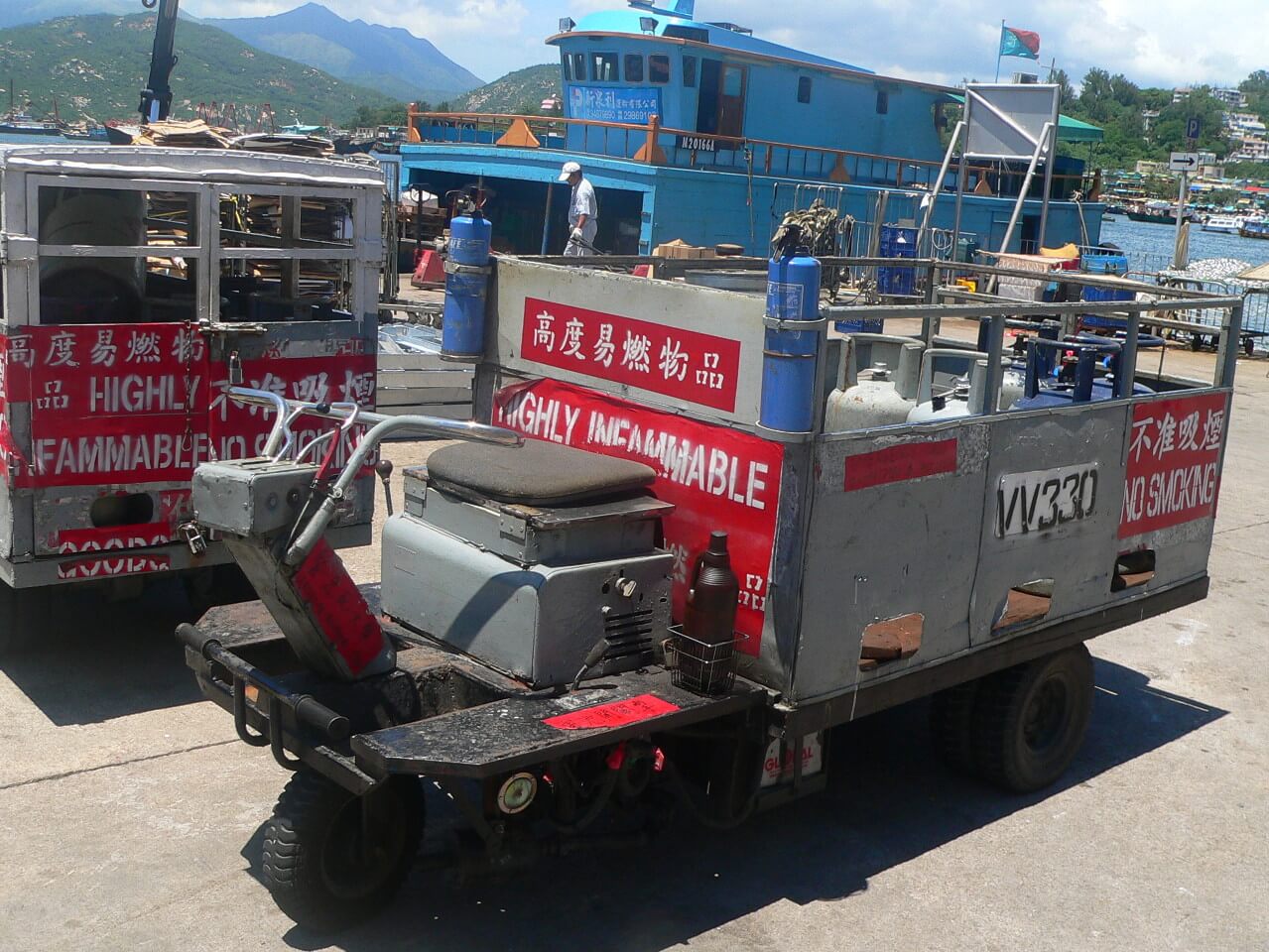 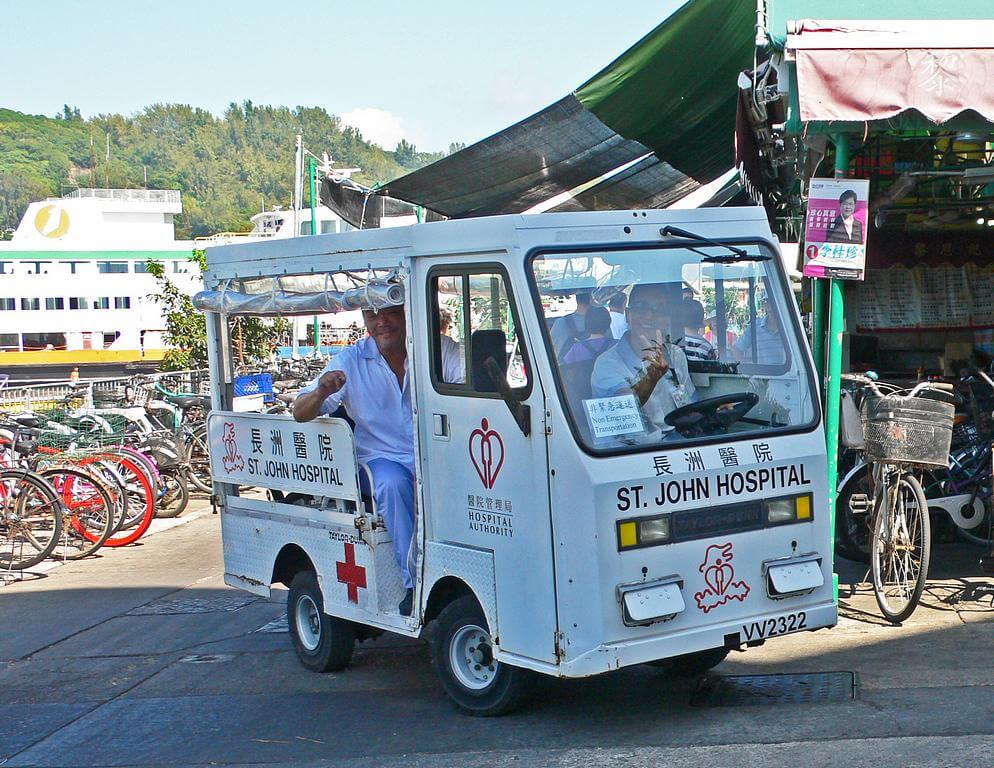 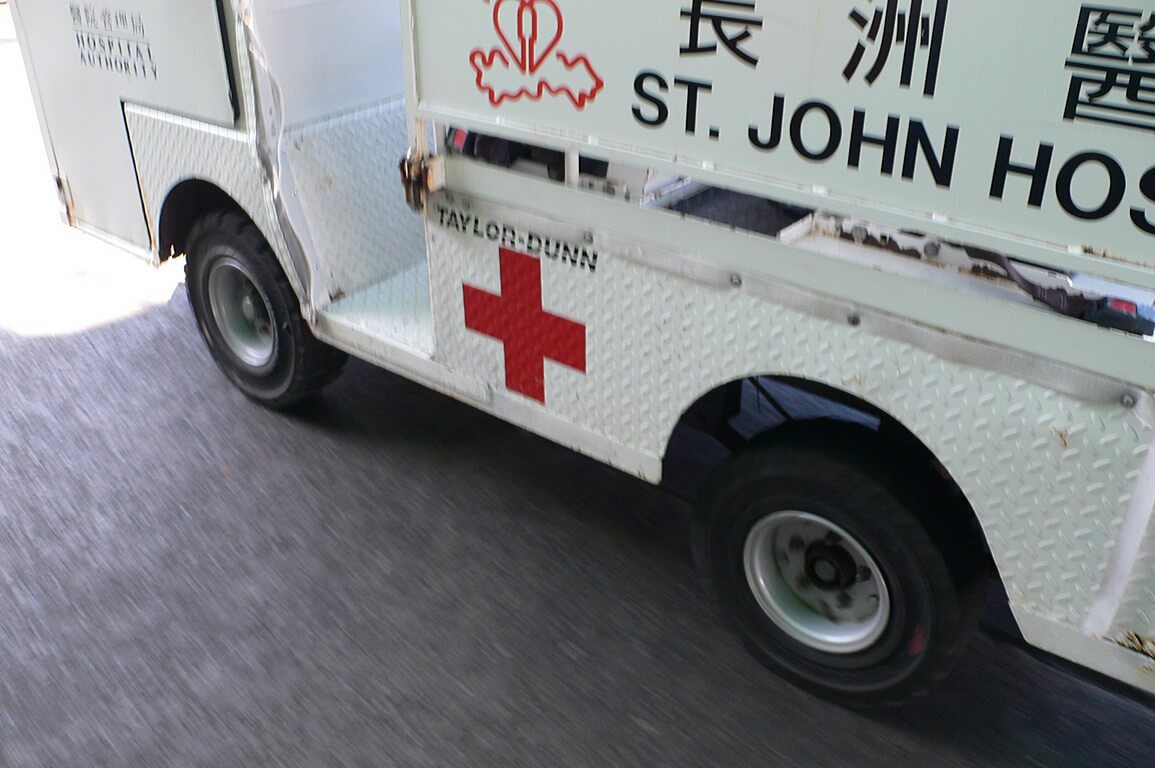 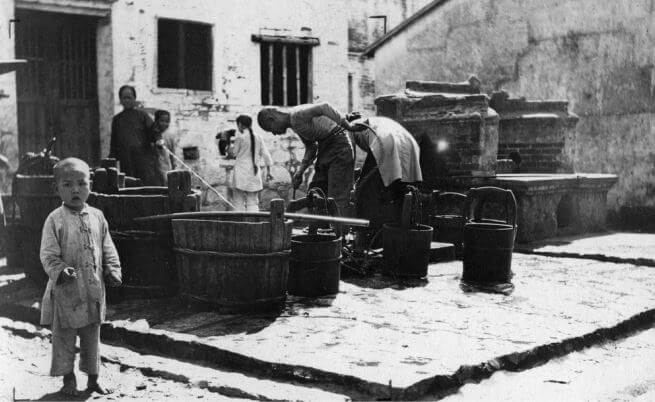 Ford Wong writes on gwulo.com:
The terraces are part of a preserved fruit factory which dated back to 1908. In those days, the workers use the sun light to dry the fruit and made over 30 varities of products.
The factory moved to China in the 1970’s when the labour source dried out. 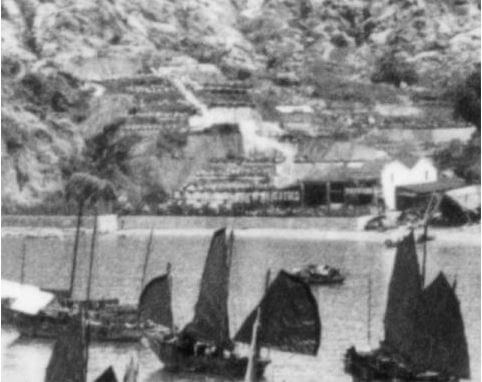 This article was first posted on 1st October 2015.