HF: Our recent article about Arnhold Aviation, a subsidiary of Hong Kong based Arnhold Holdings Ltd which is the corporate descendant of Arnhold, Karberg & Co., a company founded in 1857,  says that Arnhold Aviation represented four aircraft  manufacturers in China. Three of these I am at least familiar with but the fourth Blackburn I had never heard of. I thought it would be of interest to learn about this company.

“In the spring of 1928 Arnhold & Co, Ltd. decided to start selling aircraft and hired WEF Jones to head the operation. The Arnhold Aviation Department was born on 1 April 1928.

A two-seat de Havilland DH 60 Moth was purchased for demonstrations in Shanghai and arrived early in 1929 and Captain FA Swoffer was engaged as Chief Pilot. Arnhold & Co became representatives of de Havilland and Handley Page, later also Blackburn and Fairey…(1)

Blackburn Aircraft Limited was a British aircraft manufacturer that concentrated mainly on naval and maritime aircraft during the first part of the 20th century. (2)

Any additional information about Blackburn in China, or indeed in Hong Kong, would be very welcome.

Blackburn were makers of aircraft and engines of Brough, Yorkshire 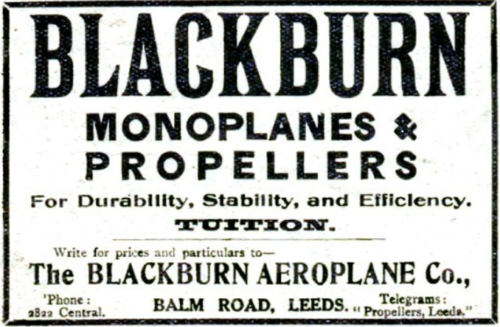 1914 Blackburn set up a company, Blackburn Aeroplane and Motor Co, to build aeroplanes; moved to premises at the Olympia Roller-Skating Rink, Roundhay Road, Leeds, where they remained until 1929

1916 A new factory was built at Brough, East Riding of Yorkshire.

1921 The company supplied its first torpedo bomber equipment to the Fleet Air Arm. 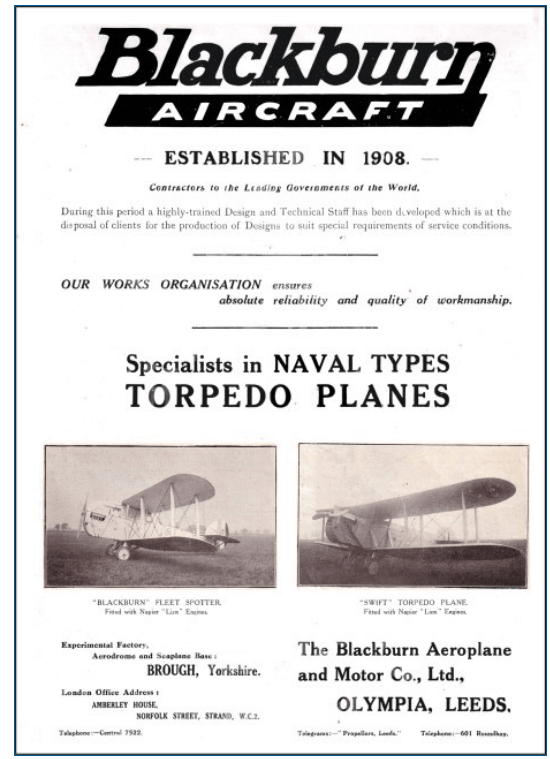 1927 See Aberconway for information on the company and its history.

By 1933 all of the aircraft production was at Brough [ a few miles west of Hull, UK] 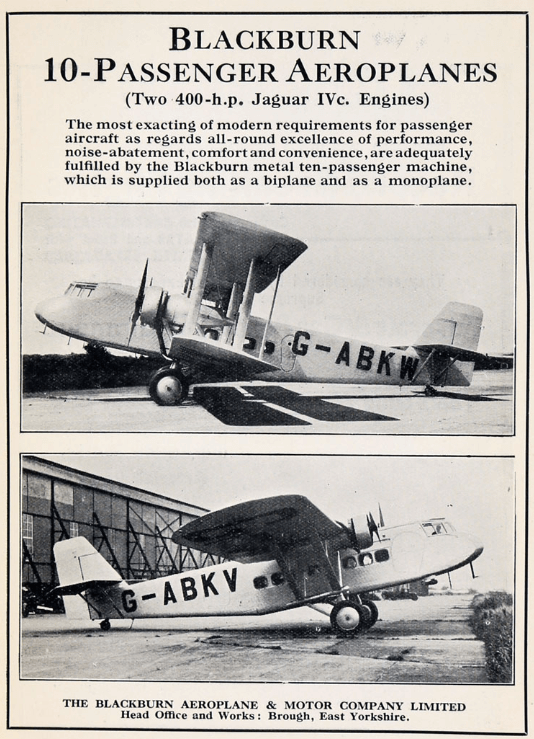 1933 Advertisement in Who’s Who in British Aviation.

1936 Public company incorporated: Blackburn Aircraft Ltd[2]. This acquired the 2 existing companies of Blackburn Aeroplane and Motor Co, and North Sea Aerial and General Transport[3] but the directors decided not to bring Cirrus Hermes Engineering Co, an associated company, into the group at that time because its new products (engines) were still in the development phase[4]. The company specialised in naval aircraft and flying boats.

1937 Through the acquisition of the Cirrus-Hermes company, Blackburn started producing aircraft engines – the Blackburn Cirrus range.

1938 Acquired the shares not already owned in London Air Syndicate which controlled the flying rights for the London Air Park[7]. Another flying school was established at Sherburn-in-Elmet.

WWII : built the Skua dive bomber for the Navy, the Roc and the Botha, but much of the production was of aircraft designed by others including the Sunderland flying boat, the Swordfish and Barracuda. Also considerable amounts of work adapting American aircraft and repairing aircraft.

1949 The company amalgamated with General Aircraft as Blackburn and General Aircraft as part of a post-war move to consolidate aircraft manufacturing. Reduction in demand for Percival Prentice aircraft and for Cirrus engines which were used in light aircraft. Subsidiary Humberside Agricultural Products CoLtd delivered its first tractor[9]

1950 Board-room splits left the company without a permanent managing director for some time. The Feltham factory was closed and work moved to Brough. The Universal freighter had its first flight. Future work at Dumbarton was put in question because of change in government policy about building houses[10]

1953 Production of the Beverley, the military counterpart of the Universal, was being ramped up for the RAF. The flying school was shut because of change in policy for service training[12]

1956 Acquired Jowett, which had been a maker of cars[13]. One third of Group turnover came from sources other than the Government[14]

1958 Beverley production ended; the N.A.39 was only just at the prototype stage[15]. Set up separate unit to make and sell electronic equipment for industrial applications, making use of the experience of the company’s electronics department[16]

together with existing subsidiaries[18]:

as well as an associated company: Megator Pumps and Compressors

1963 The Blackburn name was dropped completely.(3)