The company in its previous form was founded in Scotland in 1825 under the name of Ben Line.

The Ben Line or Ben Line Steamers, Limited was a Scottish shipping company based in Leith, Scotland which pioneered the Far East Europe trade. A private company, it was largely owned by members of the Thomson family from Leith and the Mitchell family from Alloa.

1839 William and Alexander Thomson went into the shipping business as partners, importing marble from Italy and taking coal to Canada returning with timber.

From 1859 the company operated routes to Singapore, China and Japan and this became its major source of business.

By the mid-1880s New routes had been established to the Baltic; the Canadian trade had run down. 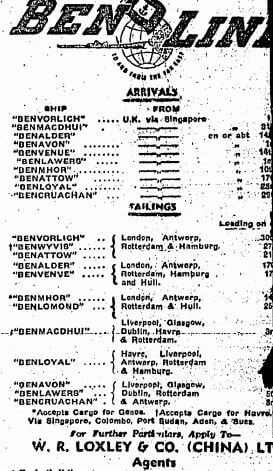 During the 1970s the Ben Line diversified into oil drilling, container ships and the transportation of chemicals

1976 Took over the Sheaf Steam Shipping Co. Combined with East Asiatic Co., Copenhagen, to run a weekly service to the Far East.

This article was first posted on 29th October 2017.