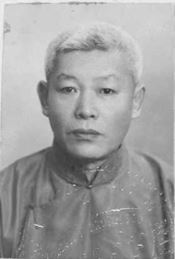 Bankers played a critical role in the post-war industrial development of Hong Kong and one particular financier – Kan Koam-tsing (簡鑑清) stood out. Owner of a Chinese bank bearing his name and a major player in the lucrative gold trade, Kan was a US trained chemist who served as a director of South Sea Textile and National Lacquer & Paint Products (maker of Camelpaint), two leading industrial enterprises in Hong Kong in the 1950s and 1960s and was particularly involved with the formation of South Sea Textile.

Born in 1895 in Shekwan, Guangdong province, Kan was a student of the famous Chinese tutor Chan Tsz-Po (陳子褒, 1862-1922) in Macau and studied at the Canton Christian College (the predecessor of Lingnan College) in Canton. He came to the United States for further education and graduated from Lehigh University in 1920 with a degree in chemical engineering. While he was at Lehigh, he went by the name “K. T. Koan” or “Katy Kan” and was president of the Chinese Students Club. One of his Chinese classmates at Lehigh was Hsiung Tsai (Class of 1919), the founder of Mayar Silk Mills in Shanghai and later HK.

Profile of K.T. Koan (his last name was somehow spelled Koan instead of Kan) in Epitome, the Lehigh yearbook in 1921.

Profile of K.T. Koan (his last name was somehow spelled Koan instead of Kan) in Epitome, the Lehigh yearbook in 1921.

Upon graduation, Kan moved to Hong Kong where he joined the metallurgical firm of Fung Manter & Co (信行金銀公司, Shun Hang Gold & Silver Company in Chinese) as a partner and resident chemist. The firm was founded in 1920 by Fung Manter (馮民德, 1895-1986, aka Huken Manter Fung), who like Kan was a student of Chan Tsz-po and also received Western education at St. Stephen’s College and the United States. Fung was likely a relative (possibly grandson) of Fung Tang (馮登, 1840-1900), the prominent Chinese American merchant whose Fung Tang & Co (馮登記) was a leading metals trading firm in HK. Like Kan, Fung was scientifically minded (he wrote a number of books on forex and telegraph and also filed a number of patents) and Fung Manter & Co was a pioneer in using Western metallurgical techniques to produce gold and silver products in HK. It was also a founding member of the Chinese Gold & Silver Exchange Society in 1932 and Fung himself at one point served as the Society’s vice chairman. In the 1930s, Fung moved to Saigon to oversee his business in Vietnam and transferred his gold business in HK to Kan. (Fung returned to HK after the War, started the Fung Manter Distillery but failed, he left a large collection of over 3000 documents and correspondence.) 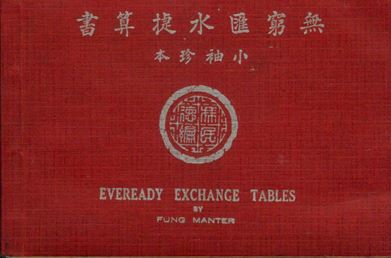 Fung Manter & Co was thus renamed Kan Koam Tsing & Co but kept its Chinese name of Shun Hang and continued to operate out of 53 Des Voeux Road. In addition to dealing in gold, Kan Koam Tsing & Co was also active in traditional banking activities of foreign exchange and remittance, acting as the HK representative of the Chinese government’s Directorate of the Post Offices and Kan himself also served as sub-manager of the state-owned Bank of Communications in Hong Kong.

During the War, Kan lived in neutral Macau. In the years immediately following the War, the gold business in HK and Macau was booming and Kan Koam Tsing & Co was right in the middle of the action as it was one of the few places in town to get gold bars reconverted. An article from the early 1950s reported that “if you want to dispose of your gold in the HK exchange, you must first take your gold to Kan Koam Tsing & Co., Gold and Silver Merchants. In a little kitchen behind the firm’s modest premises in a two-story building on Queen’s Road, gold of almost one hundred percent purity goes into the crucibles and a carefully calculated amount of silver is added. The homemade smelter goes into operation, and presto! — you have complied with the International Monetary Fund regulations and may trade your gold on the floor of the HK Gold and Silver Exchange” and “on the second floor of the Kan establishment, the gold bars will be suspended in large glass tanks filled with a solution of sulphuric acid, a current will be passed through them to precipitate the silver to the bottom of the tanks”. The gold and banking business continued until 1964 and provided Kan with financial capital to invest in industries. 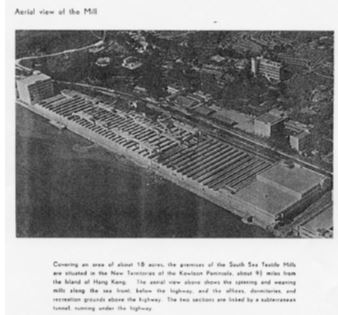 In the late 1940s, Kan came into contact with Ping-Yuan Tang (1898-1971), a prominent textile industrialist from Wuxi and Shanghai who was interested to set up shop in Hong Kong as the Civil War situation in the mainland deteriorated. Allegedly a parcel of land was available for sale by a British manufacturer of Hume pipes in North Point but Tang wanted something bigger and Kan found an 18-acre plot in Tsuen Wan and purchased it on behalf of Tang. South Sea Textile Manufacturing was formed in March 1948 and built spinning and weaving mills on the site and Tang asked Kan to join the board and invest in the enterprise. 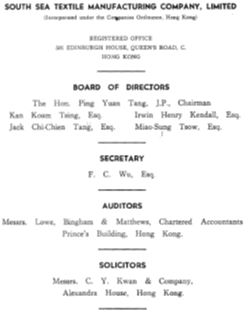 The first few years were difficult but after the outbreak of the Korean War the firm found success exporting to the US and Europe. It became one of the leading textile concerns in the colony and was ultimately listed on the HK Stock Exchange in 1964. Kan remained a director of South Sea until his death in the late 1960s (either in 1968 or 1969 – to be confirmed).

Aside from South Sea, Kan was also involved in National Lacquer & Paint Products Co Ltd as a director for many years. The maker of the famous Camel Paint, NLPP was originally founded in 1932 by Mexican Chinese Alfonso J. Ben, its chief engineer Harry J. Lowe and 5 fellow Toishan natives. 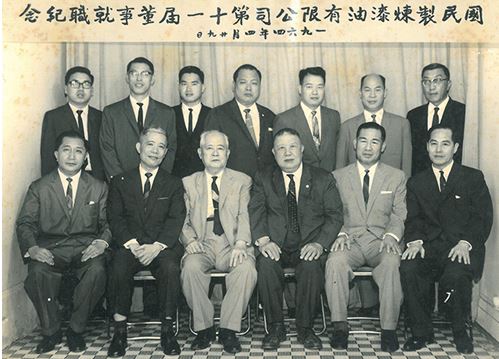 Outside of business, Kan enjoyed traveling and was active with his alma mater Lingnan. In 1949, Kan embarked on a six month round the world tour which included the United States (during which he met with old Lehigh classmates), England, Switzerland, France and Italy before returning to HK.

Like many Chinese capitalists (particularly ones from Shanghai) of his time, Kan also obtained right of abode in Brazil in the early 1950s as a backup plan and maintained a residence in Sao Paolo.

His involvement with Lingnan spanned almost half a century, serving as a trustee of Lingnan University in Canton as early as the late 1920s. After the Communists took over Canton and merged the Church sponsored Lingnan into the Sun Yat-sen University, Lingnan alumni in Hong Kong were keen on re-establishing Lingnan in Hong Kong as a tertiary educational institution and thanks to the effort of Kan and other alumni trustees such as Chan Tak-tai (founder of Tai Cheung Properties) and Lam Chik-suen (owner of contractor Lam Woo & Co), Lingnan School was opened in 1967 and its Stubbs Road campus was opened by Kan on November 19 that year. The School became Lingnan College in 1978 and Lingnan University in 1999. 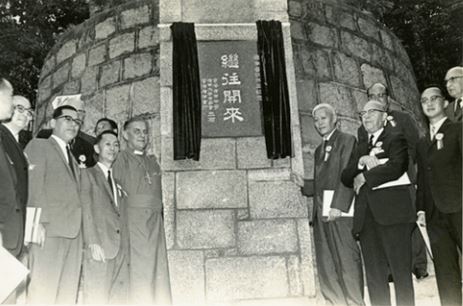 Kan Koam-tsing unveiling the commemorative plaque at the opening of Lingnan College on Stubbs Road on November 19, 1967.

Kan and his wife Tsoi Mei-chee had seven children, all of whom were educated in the United States. Marital ties connect the Kans to other Chinese banking families – his son Alan Kan Hung-kuen (graduate of Pomona, Stanford and Columbia) married Mina Tang (graduate of Vassar and NYU), the daughter of Bank of Canton (San Francisco) accountant Zubin Percy Tang (1899-1992) in 1956 in Berkeley and another son Antonio Kan Hung-woon (簡鴻煥, born 1937, University of Pittsburgh graduate, NY Life agent) married Gloria Li Chi-ying (李志英,Elmira grad, secretary at the UN),daughter of Aubrey Li Fook-wo (1916-2014) of the Bank of East Asia in 1970 in New York. 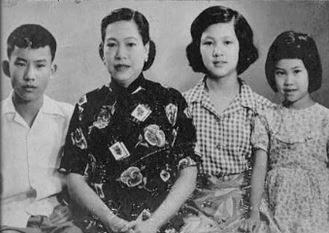