Hugh Farmer: This article is a joint effort of Thomas Ngan, IDJ, Neil Morris and myself.

Thomas has done a fantastic job in first translating the Chinese company names and products. And secondly by inserting arrows into the two photos below to link the advertising signs to the index. A lot of work Thomas, thanks very much.

The first trade fair to promote local products was in 1938 under the auspices of the Chinese Manufacturers Association of Hong Kong. 40 industrial enterprises took part and 200 products were displayed. From then on the HK Industrial Products Exhibition was held annually unil 1974 apart from 1942-1947. These 31 annual events reached a peak in 1968-1969 when almost two million people visited the venue.

IDJ: Industry trade fairs used to be an annual event for HK manufacturers to show their wares. I remember going to one in the early 1970s on the then new Wanchai reclamation. The event seemed to move around regularly and use whatever piece of vacant ground was available at the time.

Hugh Farmer:  I asked Neil Morris about these photos. Neil worked for the Hong Kong Trade Development Council (HKTDC) for many years. He thinks they might be from a Chinese Manufacturers’ Association event as there seem to be no signs in English.

He asked a retired HK civil servant friend of his who worked for years in the Resettlement Dept who confirms that the large white building on the left was later on that Dept’s HQ.  He remembers going round a trade fair put up by the Chinese Mfrs’ Assn sometime in the 1950’s but can’t recall if this was it. He was asked to go round pretending to be a businessman from UK!

Many thanks Neil and to your friend. 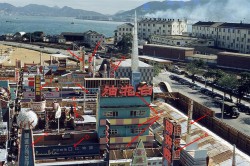 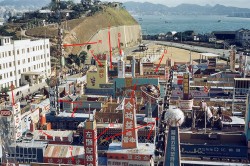 1957 TST industry fair
A very clear view of the Industry Fair located at the same place where the Sheraton Hotel now stands.

Thomas Ngan has researched the companies indicated in these two photos in this index:

Hugh Farmer: From 1938 to 1974, the Chinese Manufacturers’ Association of Hong Kong (CMA) organized 31 exhibitions of locally made products, to promote the industrial products manufactured in Hong Kong to local citizens and overseas buyers.

*As an aside Holts Godown shown in the background of the first photo is of great interest. Holt’s Wharf and the Godown were set up in 1910 and jointly owned by the Swire Group and Blue Funnel Line. Together they formed  a railway and freight hub in Tsim Sha Tsui. Separate article to follow.