During the Double Ten riots in October 1956, a number of factories and stores in Kowloon were attacked by the rightist rioters as their proprietors were perceived to be pro-Communist. Three of the targets were The Garden Co, Oriental Soy & Canning and Canton Metal Windows Mfg. which were all covered earlier in other articles. Two of the other targets – South China Toys Factory and Chung Keen Co were both founded by Wong Pui-kow (黄佩球 1912-2005), an outspoken businessman who was supportive of the Communist regime from day one and served as leader of the pro-Beijing HK Chinese Importers’ & Exporters’ Association (中華出入口商會, hereafter refer to as CIEA) for decades (vice chairman from 1971-82, chairman 1983-86). The political affiliation extended to the next generation as his son Wong Ting-kwong is currently one of the pro-establishment Legislative Councillors, representing the CIEA.

A native of Dongguan in the Guangdong province, Wong came to HK at an early age with his parents. As a business pioneer, he founded South China, one of the earliest toy manufacturers in Hong Kong in 1939 and Chung Keen, one of the first privately held Chinese products department stores in 1955.

In Sarah Monks’ well researched history of the HK toy industry – Toy Town (which primarily focus on the development of the HK toy industry in the post-War era, specifically plastic toys), there was no mention of South China Toys Factory and it was the recently published Complete HK Toys Handbook which brought the company’s name back to light.

Toys made in HK before WWII were primarily made from metal, paper, cloth and wood as plastic toys did not emerge until after the War (first plastic factory was founded in 1947 – see article on Chieng Han-chow).  One of the major pre-War toy manufacturers was China Can (see articles) which made a variety of metallic toys while South China Toys, also known as South China Hop Kee Toys Factory (南華合記玩具) in Chinese, manufactured toys out of paper, wood and bamboo in addition to metals. The original South China factory was located at 205A Hollywood Road near Cat Street in Sheung Wan but later it moved to 250-254 Castle Peak Road in the Kowloon side where its 4000 sq ft factory had 60 workers. The firm made over 60 different types of metallic toys including kitchenware, utensils, ships, airplanes, cars, trains, whistles, trumpets, spinning tops etc. and the production process was quite complex – in fact more complicated than the manufacturing of the actual objects in the case of utensils involving dozens of steps and four different departments. 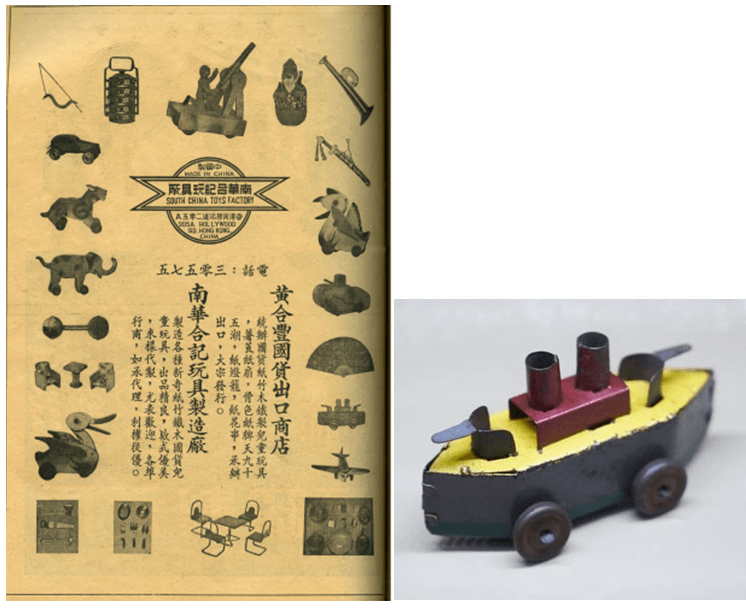 90 percent of South China’s products were exported to overseas markets such as the UK and Southeast Asia and only 10 percent were sold locally. In the 1941 ad above, South China also had a sister company by the name of Wong Hop Fung Chinese Exports (黃合豐) which specialized in the exports of Chinese-made toys (presumably by other firms in addition to South China) including paper lanterns, playing cards and flowers.

In early November 1949, a month after the founding of the People’s Republic, Wong organized a staff fundraising competition for the People’s Liberation Army which all 79 staff members of South China participated and he also led a delegation to Shenzhen to visit the troops. The factory resumed production couple of weeks after the Double Ten attacks in 1956 and Wong expressed his anger of not getting police protection despite being a law-abiding taxpayer. By the 1960s, the factory was renamed South China Toys & Metal Ware Factory and was still in existence in 1969. 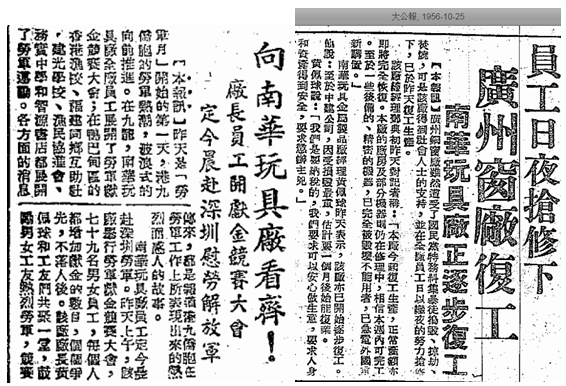 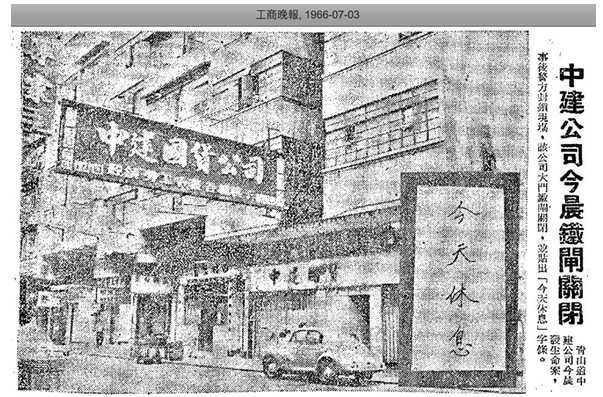 Picture of Chung Keen Co in 1966 after the murder with the sign “Closed Today” in Chinese on the right (Kung Sheung Evening News, 1966-7-3)

Chung Keen Co was located at 277-279 Castle Peak Road, not far from the South China Toys Factory. The first department store which focus exclusively on Chinese made products in HK was China Products Co which was founded in 1938 by a consortium of state-controlled banks such as Bank of China, Bank of Communications and Kincheng Banking Corporation with Tu Yueh-sheng, the politically connected “Godfather of Shanghai” who was living in HK as chairman. In 1955, Wong Pui-kow and other businessmen such as Chu Cheuk-wan (朱灼云, 1911-1991, a Fudan graduate who was also involved with the CIEA) established Chung Keen as the first privately held Chinese products department store in Hong Kong. Unfortunately, Chung Keen was attacked by rioters in its second year of operations and it took a month to repair the damages and re-open for business.

In July 1966, Chung Keen made the headlines as one of its security guards was murdered by a 26 years old Vietnamese Chinese staff member Wong Kai-kee (黄啟基) who was trying to steal money from the store to finance his own wedding. Despite pleas from the politician Brook Bernacchi who argued that the death penalty was abolished in the UK in 1965 and HK as a British colony should follow suit, Wong was sentenced to death for the murder and became the last person to be executed in Hong Kong in November 1966. 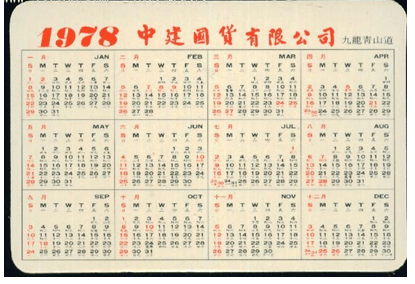 At its peak, Chung Keen had nine storefronts and employed over 100 staff members. It started out selling mostly stationaries but extended to all merchandise with jackets being top selling items. The 1980s was the golden decade for the store and other Chinese products department stores. When the Guangdong Industrial and Commercial Trust Enterprise (廣東省工商聯信托資本公司) was formed in 1981, Wong Pui-kow was invited to join its board. The firm counted David Kwok (郭棣活) as honorary chairman and Chan Cho-pui (陳祖沛, the same businessman who established the Ta Cheng Nail Factory in Tientsin, see article on S.Y. Tang and HK Nail Factory) and other directors include Ko Chun-tung (高振東, son of CGCC leader Ko Cheuk-hung and distributor of mainland cement), Lau Kam-hing (劉錦慶, CGCC Hakka leader, distributor of mainland honey), Tou Hoi-iu (陶開裕, 1923-1993) from Macau and Chow Hung-piu (周鴻標, Po Leung Kuk director). In the early 1990s, Wong Pui-kow acquired all the shares of Chung Keen and handed the reins to his children, who continued to operate the store until 2011 when they decided to close it down (not due to rent as they owned the property) after over half a century of operations serving multiple generations of customers.

Aside from CIEA, Wong Pui-kow was also a delegate to the National People’s Congress for the Guangdong province in the 1960s, a Guangdong CPPCC member, permanent honorary chairman of Tung Koon District General Association (東莞同鄉會), a founder of the HK & Kowloon General Merchandise Merchants Association (港九百貨業商會), executive director of the Chinese General Chamber of Commerce and chairman of the Happy Valley Athletic Association (愉園體育會) and Chi Kin Winter Swimming Club (智健冬泳會). Throughout his life, Wong was generous with Chinese causes, even sold his wedding ring to purchase government debt to support the Chinese military effort during the Korean War. He was one of the 12 donors of the Hong Kong Room in the Great Hall of the People in Beijing. After visiting Guizhou province for the first time in 1997, he donated over RMB16 million to build over 50 schools in the mountainous region of the province. When he died in 2005, he left 40% of his liquid assets to Project Hope to build schools in poverty stricken rural areas in China.

This article was first posted on 1st June 2018.