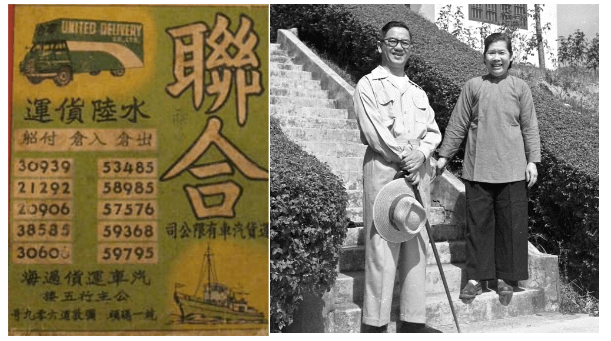 Established in 1933, United Delivery Co Ltd was a leading logistics provider in Hong Kong with a large fleet of lorries. Its founder Albert Vivian Youngsaye a.k.a. Young Tsun-dart (楊俊達,1897-1954) was a major figure in the history of the transportation industry in HK not only for United Delivery but also as the secretary of HK & Yaumati Ferry (HYF). Since the website has other articles about the history of HYF, this article will focus on the life of Young and United Delivery.

Albert Youngsaye was born and educated in New Zealand, the eldest son of Young Sui-Saye (楊瑞世,aka Young Lau-bor; his Chinese name became the English surname Youngsaye which was used by his children), a native of Panyu in Guangdong whose father John Young (aka Young Yuk-tin) brought the whole family to New Zealand during the gold rush and established the Kwong Lee Yuen store in Greymouth. In 1915, Albert came to Hong Kong with his younger brother James Lawrence Youngsaye (1901-1990, enrolled at DBS where he later taught for many years; see the author’s entry on him in the Dictionary of HK Biography) where he became an articled clerk at the law firm of Nash & Co, whose chief clerk was his uncle Young Hei (楊瑞熙). In 1923, a group of Chinese businessmen established HYF and offered Albert the job of company secretary. For the next three decades, he helped to grow the firm to become the leading ferry company in HK.

In the early 1930s, Albert met an enterprising manual laborer by the name of Chung Yew (鍾耀) who bought six lorries to offer delivery service but had trouble making his payments. Albert bailed Chung out and together they formed United Delivery where Chung managed the drivers and laborers while Albert took care of all other aspects of business. The duo proved to be a good team and their timing was also right as the demand for delivery service soared in HK with the massive influx of refugees from the mainland due to the Sino-Japanese War and HK experienced an industrial and construction boom. By the late 1930s, United Delivery was a major player with up to 100 lorries. Sadly, when the War came to HK in 1941, United’s entire fleet was requisitioned by the HK government and later seized by the Japanese when they occupied the city.

During the Japanese occupation, United Delivery and other major transportation companies in HK such as HYF, KMB, CMB, Blue Taxicab and Star Taxi were amalgamated under one company called “Communication & Transportation Corporation” by the order of the Japanese military administration with offices located at the first floor of the Union Building at the corner of Pedder St and Connaught Rd and Albert worked alongside Tang Shiu-kin and William Louey of KMB, Ngan Shing-kwan of CMB and Tsan Yung of Blue Taxicab. 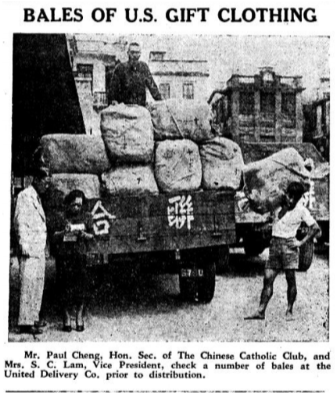 United Delivery helping the Chinese Catholic Club with distribution of bales of US gift clothings in 1951 (Nov 2, 1951, Sunday Examiner)

After the Japanese surrendered in 1945, United Delivery had to start afresh since its original fleet were gone. Starting with ten second-hand Bedford lorries obtained from the government, United resumed its business and later added civilian Bedford trucks imported from Britain which were used to deliver rice. They also developed a custom-built furniture van with a bus chassis and a low floorboard, which enabled easy loading like stepping on a bus platform. As of 1949, United’s head office was located at 311 & 312 Marina House while its Kowloon office and main garage was located at 614 Nathan Road. Branch garages and godowns were located at Soy Street in Mongkok, Haitan Street in Sham Shui Po and Star Street and Hennessy Road in Wanchai. Aside from truck delivery, the firm was also involved in stevedoring, storage, tugs and lighters (according to Port of Hong Kong in 1966, it had 12 port lighters under its name) and boasted its capabilities of delivering goods cross harbor – through its own vessels or working with HYF.

In the 1950s, business was robust as HK industries began to take off and United Delivery was involved in delivering equipment such as boilers, transformers, condensers and machinery to new industrial estates and textile mills in Kwun Tong and Tsuen Wan and power generation equipment to the new power stations there were being built to support the electricity demand of these factories.   The fleet was re-engineered from petrol to diesel and tractors and low bed-trailers were added to haul heavy equipment.

Outside of work, Albert Youngsaye served on the Tenancy Tribunal and was awarded a Queen’s Coronation medal. He built his private villa Yeung Yuen in Mui Wo and was keen on the development of Lantau. He married his wife Lai Yung-mei (黎勇薇, 1897-1980) in 1928 with whom he had 2 sons (Herbert 楊卓銘 and Albert 楊卓耀) and 3 daughters (Grace, Annabelle 楊展文 and Doreen 楊展慧, married to the son of architect Robert Fan). Sadly, triple tragedies struck the family in 1954 – first Herbert died in a plane crash off Italy in January, followed by his younger brother Albert who died of leukemia in New Zealand in June. In July, Albert Youngsaye died of a stroke aboard his ship en route to New Zealand. His eldest daughter Grace Young OBE JP (楊展翹, 1929-2007), who was called to the bar at Gray’s Inn the same year and the wife of former high-ranking government official Eric Peter Ho (何鴻鑾), succeeded his father as company secretary of HYF and later became its managing director. She was a member of the Urban Council and served as chair of the Keep HK Clean campaign. Albert’s nephew – the UK-trained marine engineer Edward Young Cheuk-kin (楊卓堅, son of Bill Youngsaye) also served as marine superintendent of HYF and CEO of HK Shipyard. 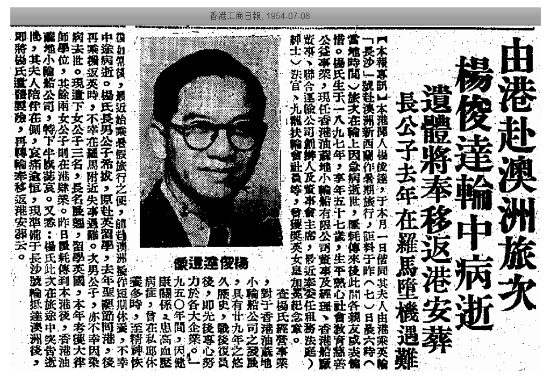 After Albert’s death, United Delivery was run by his cousin Donald Young Tsun-choong (楊俊驄), the fourth son of Young Hei. In 1960, Watson Bros Transportation, a major US trucking company in the US appointed United Delivery Co as its agent in Hong Kong. Unable to adjust to changing times (for example, according to his son in law Eric Peter Ho, the firm did not incorporate lifting gear into its lorries while others did), the firm slipped into terminal decline in the 1960s and was wound up in 1978. 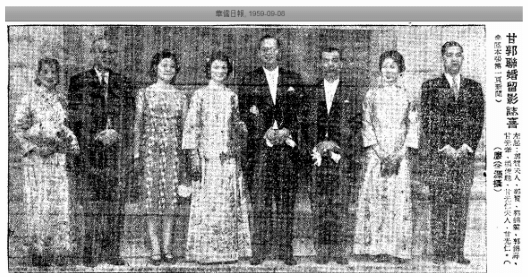 Sources (other than those listed above):

This article was first posted on 8th March 2019.