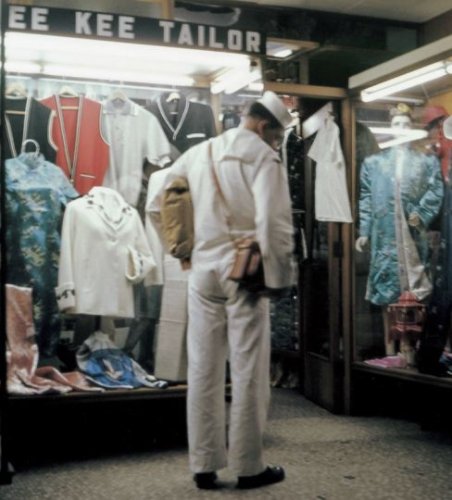 A US serviceman outside a Wanchai tailor in the 1960s Courtesy: The HK Memory Project.

HF: It’s hard to walk along Nathan Road in Tsim Sha Tsui these days without being accosted by someone offering the ubiquitous copy watches or gentlemen’s tailor sir. There may be several of the latter dotted around TST, Wanchai and Central but as Stuart Heaver recently wrote in an article for the SCMP the number of tailors in Hong Kong has suffered a dramatic decline since the 1960s.

As Stuart says: Fifty years ago, there were an estimated 500 tailor shops in Tsim Sha Tsui and customers from all over the world, including political leaders, Hollywood celebrities and pop stars, beat a path to their doors.

On August 10, 1966, the South China Morning Post ran a headline announcing that London’s Savile Row, until then the undisputed inter­national home of bespoke tailoring, had been overtaken by Hong Kong. The article suggested the city was now “the sartorial capital of the well dressed man’s world” – but much has changed in the subsequent five decades. 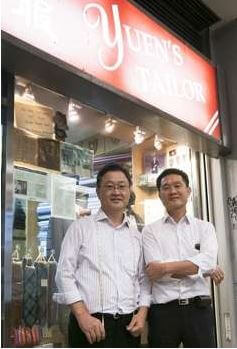 The Yuen brothers at their shop in Central. Picture: Stuart Heaver Courtesy: SCMP

In an era of disposable fashion, with international brands domi­nating the men’s market, few young people are entering the industry and many fear the future of Hong Kong’s proud bespoke tailoring tradition is hanging by a thread…

..“I have one son. He [pointing to his brother Johnny] has one son, but neither has ever shown any interest in the business,” says Bonnie Yuen, who thinks tailoring in the city might be wearing thin. “There are now less than 40 really good experienced tailors in Hong Kong.”…

This article was first posted on 23rd October 2016.