The Modernisation of the British Section of the KCR, 1983 article – follow-up letter

IDJ has sent this letter, and accompanying image, which was written in response to the publication of the article Under the Wires to Lo Wu: The Modernisation of the Kowloon-Canton Railway in The Railway Magazine, November 1983, linked below. 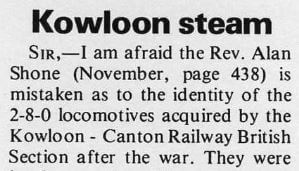 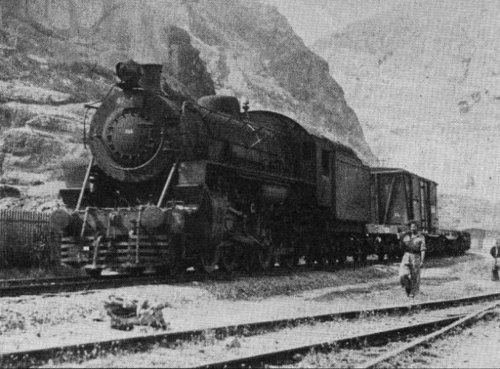 SIR, I am afraid the Rev. Alan Shone (November, page 438) is mistaken as to the identity of the 2-8-0 locomotives acquired by the Kowloon – Canton Railway British Section after the war. They were in fact twelve WD “Austerity” 2-8-s sent out from Britain, six in 1946 and a further six in 1947. There were but three of the Kitson tanks left at the end of the war, two Baltics and one 2-6-4, the others having gone much earlier to the Middle East.

After the war various KCR Chinese Section locomotives handled the passenger and freight services, including a Skoda 4-6-2 of 1937, two North British Locomotive Company 0-8-0s of 1938 and several 1930s USA-built 2-8-2 and 2-8-0 types. Early in1946, under the auspices of UNRRA, six oil-burning 2-8-2 “S200” class locomotives were shipped in from Iran (one Alco, two Baldwin, and three Lima built) and were put into working order at Hung Horn sheds for the Chinese Section.  I enclose a photograph of’ one of these locomotives taken in April 1946 before the ex-WD‘‘Austerities’’ had arrived.

See: The Railway Magazine is a monthly British title that has been published since July 1897.