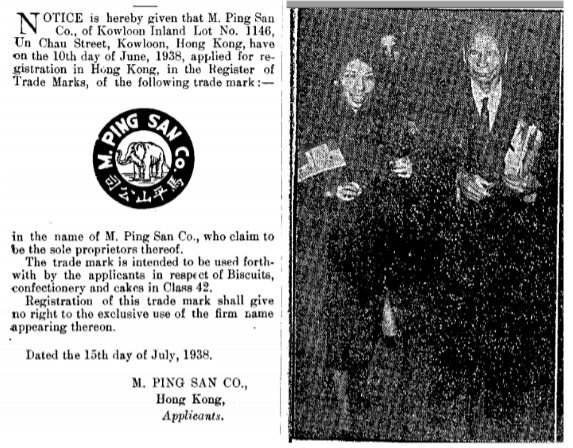 Earlier on the website, I covered the Three Kings of Biscuits – M.Y. San, M.P. San and Pacific which were started by three related Filipino Chinese families with the last name Ma (“horse” in Chinese) from the Zhongshan prefecture. As it turns out – there was a fourth “Horse” by the name of Ma Ping-san who not only was a director of M.P. San & Co but also started his own biscuit manufacturer M. Ping San Co in the 1930s and a gourmet powder & soy sauce factory and a perfumery after the War.

The obituary of Ma Ping-san in 1975 (華僑日報, 1975-01-18) indicated that he was 86 which would mean he was born in 1889 or possibly in the early 1890s as Chinese has the custom of adding three years to the age of deceased individuals. Since he served on the board of M.P. San & Co and given the spelling of his name, it is likely that he was a brother or cousin of M.Y. San and M.P. San. His firm – M. Ping San Co (馬平山餅乾公司) first appeared in 1938 when it registered its trademark featuring an elephant (as the horse was already taken by M.P. San) with the HK government. Like its more famous counterparts M.Y. San and M.P. San, M. Ping San was involved in the production of biscuits, confectionery and cakes and had its factory at Kowloon Inland Lot 1146 on Un Chau Street in Sham Shui Po. In the late 1940s, M. Ping San’s factory was listed as 332 Un Chau Street (香港工商手册, 經濟資料社, 1946; Telephone Directory for Hong Kong & Kowloon, HK Telephone Co, 1948)

Ping San never reached the popularity of M.Y. San or M.P. San so Ma Ping-san expanded into other industries after the War. He launched Tin Wah Gourmet Powder & Soy Factory (天華醬油味冠廠) at the Un Chau Street site which manufactured the “Victory” brand of soy sauce and gourmet powder and he was a co-founder of the HK Kowloon Gourmet Powder Merchants General Association (港九味粉同業總會) with Chang Shun-yen of Maui-Kong V-Pein (see article) and others in 1961. He also established On Wah Perfume Co (安華香水廠) at 111-113 Parkes Street in Kowloon which manufactured the “Double Coin” brand of toiletries products. All three companies did not appear to have been incorporated and have all since faded into history. 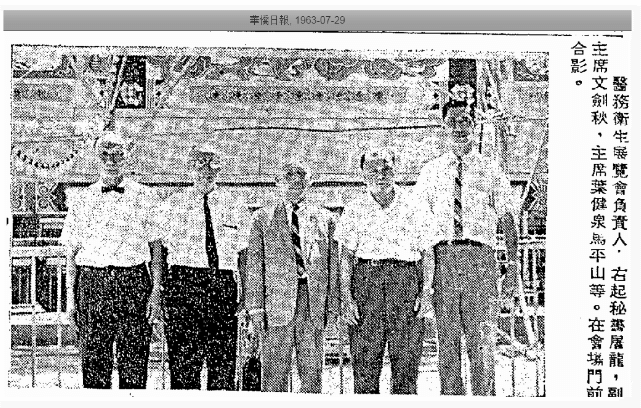 Outside of his business, Ma Ping san was very active in community affairs. He was a director of the Chinese Manufacturers Association and the Kowloon Chamber of Commerce, vice chairman of the Yau Ma Tei Kaifong Welfare Association and head of its medical department and was elected chairman of the HK & Kowloon Tobacco Merchants General Association (港九香煙業總商會) from 1964-65. He was also a big fan of Cantonese opera and was friend with the famous Cantonese opera actor Mak Ping-wing (麥炳榮). Ma Ping San was survived by 2 sons 5 daughters. His fourth son Ma Yuk-ming (馬煜鳴), who married Chow Suk-han (周淑嫻) in 1961, was engineer and manager at Tin Wah and On Wah while his other son Ma Yuk-kwong (馬煜光) married Yau Wai-yin (尤慧賢) in 1960.