Guy Breshears contacted me explaining he lives in Hong Kong and is working on a HK history project. He wondered if we had any information about Tai Shek-ha 大石下 Stone-quarry – A hamlet which is mentioned in a 1841 HK Census.

The first set of census results were published in the 2nd issue of H.K. Govt. Gazette, May 1841

Guy said he had  not been able to find the present location of this stone quarry and he didn’t see it on the list of quarries on our website. He’s assuming it would be on HK Island.

Thomas Ngan investigated and says, “If the date of the mention of Ta Shek Ha was back then it should be somewhere on the island.  I don’t have any concrete information about things that old on hand.  I googled Tai Shek Ha quarry and one of the entries points to a Chinese site (http://weshare.hk/Soldier/articles/1197480) mentioning the origins of Shek Tong Tsui.   They think it is likely that the neighbourhood of the  mentioned quarry is there.

Thomas adds: There are a few things  that I remember after reading the above article:

1.  Hakka immigrants came in the late Qing Dynasty to quarry the granite and some of them settled in Tai-Shek-Ha;
2.  However they were frequently harassed by Pirates and wild animals;  thus they decided to move elsewhere.  One of the branches of the family moved to Hok Tsui village (also on the Island) while the other branches of the family moved to Kowloon side, probably working in other quarries.  So maybe Hok Tsui village is another lead?
3.   As there was still good quality granite in the Tai-Shek-Ha location, somebody else came and mined it.  That probably happened before Captain Belcher made his maps
4.  The mining might have stopped after more people settled in the location, now called Shek Tong Tsui, probably after Governor Bowring started reclaiming  the Praya in the west end

However, Guy says,  “I checked out the census and found out that Shek Tong Tsui at that time  was called Shek-tong Chuy 石塘咀.
Tai Shek-ha大石下 means “under the big rock” or something like that.  But they might be in the same area together.

Guy showed the original version of this article to his niece, Charlotte Chan, aged 16, and she came up with the link below.

He says “The map isn’t great but it does give a clue to where it is. Tai Shek Ha is on the northern part of HK Island. It looks like it’s around the Wan Chai/Admiralty area. It would have to be south of Queen’s Road because everything north of it didn’t exist at the time. Also, if you look to the right of Tai Shek Ha you see 3 place names. The first is Hung Heong Loo which is the area around the Tin Hau temple near the MTR Tin Hau station.” 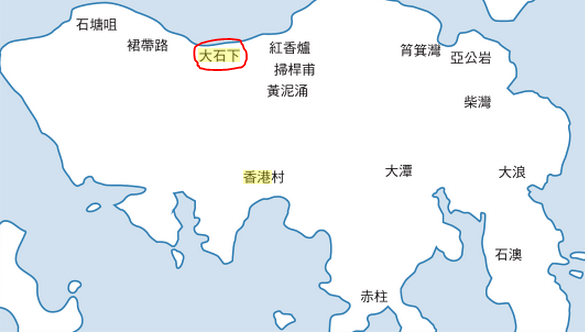 Congratulations to Guy’s niece for some good detective work!

I would say it is still inconclusive. More digging is required.

HF: I am inclined to agree with Thomas. Further information is required to fully confirm the village and quarry location. Thanks to everyone for their efforts.

Guy: I wrote to a man named Rudi Butt who does the blog site called “Hong Kong firsts”
http://hongkongsfirst.blogspot.hk/ because his site has some maps on it. He wrote back saying: Hi Guy,
Thanks for writing. Tai Shek-ha is also known as Belcher Bay, at Kennedy Town. It was written in Belcher’s chart of 1841 as “Tyshegar”
http://www.raremaps.com/gallery/archivedetail/32255mb/Hong_Kong_surveyed_by_Captn_Sir_Edward_Belcher_in_HMS_Sulphur_1841/British%20Admiralty.html
Hope this helps, Best wishes, Rudi
It’s somewhat closer to what we had a few days ago. I’m sure this will also be subject to debate.
HF:  Here is a detail from the Belcher map with Tyshegar circled. It’s the best I could come up with. 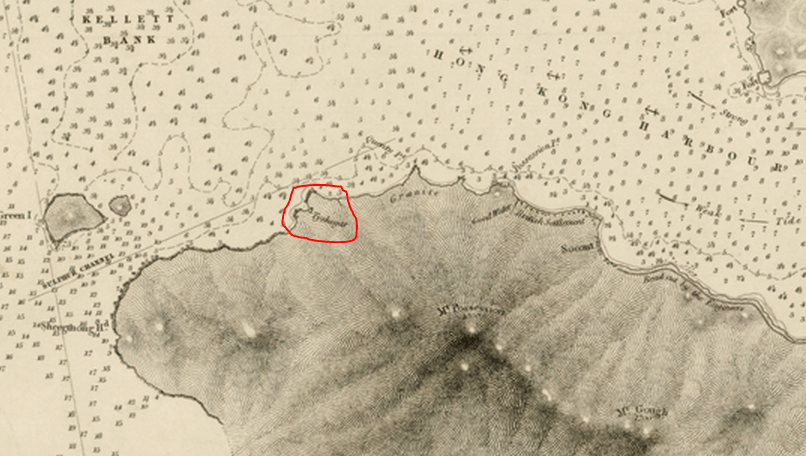 And a contemporary Google map of approximately the same area for comparison.

Guy contacted the Civil Engineering and Development Dept. in Sept 2014. CEDD’s CK Choi responded, We are not aware of the place and quarry called Tai Shek Ha (大石下) from our records.  You may find from the public domain that the name Tai Shek-ha quarry was mentioned in a conference paper entitled ‘The Licensing System for Quarrying in Hong Kong 1841 – 1941’ by S.W. Poon et al of the University of Hong Kong, which was presented at the Institute of Quarry Conference in 2011.

Guy wrote to Dr SW Poon of HKU, who replied, There are no other details about Tai Shek Ha except that it was quoted as “a hamlet for stone quarry with a population of 20 in 1841 census” (Hong Kong Gazette, No.2, 15 May 1841). The location is probably the area in between Shek Tong Tsui (Sai Ying Poon) and Belcher’s Bay. Captain Belcher’s map (1841) showed its location.

This article was first posted on 10th September 2014.

HF: We have several articles about quarrying and stone breaking in Hong Kong which are listed in the Index.