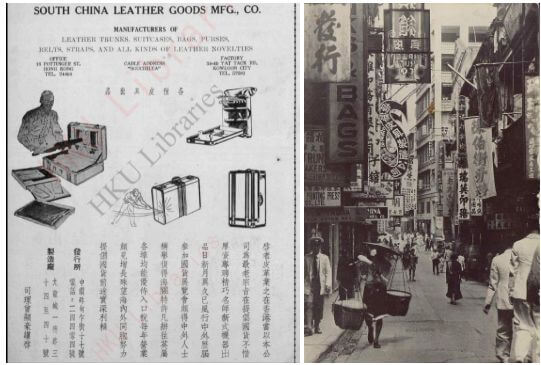 Founded in 1920, South China Leather Goods Manufacturing Co. was one of the oldest and largest manufacturers of leather goods in Hong Kong. In 1925, its address was already listed as 17 Pottinger Street in Central while its factory was located at 73-75 Yue Chau Street. (Comacrib Directory)

Not a lot of information is available about South China’s founder Tsang Chun-sang (曾春生), who was a native of Toishan in Guangdong province.  As of 1936, the firm had capital of HK$100,000 and was doing annual sales of HK$200,000. The firm had 90 workers at its 5000 sq ft factory at 34-40 Yat Tack Road in Kowloon City while its sales office was located at 17 Pottinger Street in Central. The firm primarily made leather trunks and suitcases but also manufactured other leather goods such as purses, wallets, belts, billfolds, bags, hat boxes and others, primarily out of skins of buffalos, horses, cattles and sheeps from the mainland, dyes from Germany, locks from the UK and cloth sourced locally. The finished products were exported to markets such the Philippines, Hawaii, San Francisco, South Africa and sold locally in HK and southern Chinese cities such as Swatow and Amoy. There are four major production steps and areas at the factory where manual labor was supplemented by the relevant machinery to enhance product quality and production efficiency. (Zhong Hua Chang Shang Zhu Pin Zhi Nan, 1936) 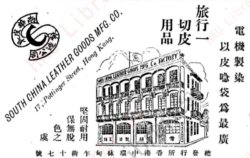 By the late 1930s, South China was led by Tsang Chun-sang’s son Tsang Hin-ho (曾顯豪), who was in his twenties. Born in Hong Kong, Tsang Hin-ho went to Shanghai at an early age where he studied at St John’s University. After graduation, he returned to HK where he did further studies in leather and tanning and became the general manager of South China in the late 1930s. As the Sino-Japanese War progressed, not only did South China ride the wave of supporting Chinese-made products but Tsang personally donated to the war effort. (A Century of Commerce, 1941) 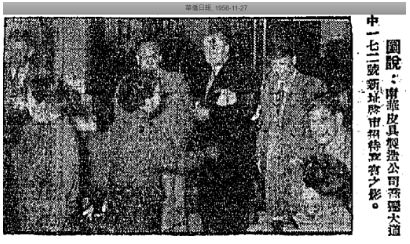 In 1956, South China’s location at 17 Pottinger Street was being re-developed into the Man Yee Building and as a result, the firm relocated its retail store to Wing Lok Street before settling on 172 Queen’s Road Central. Its factory by then was listed at Whitfield Road in Causeway Bay instead of Kowloon City (presumably taken over by the Japanese during the occupation as part of the Kai Tak Airport extension). The 1958 Chinese Manufacturers Association directory listed both the firm’s factory and office at 172 Queen’s Road Central while its manager was listed as Tsang Sau-po and its phone number had changed from the less auspicious 24404 to more auspicious 21313. The firm never appearred to have incorporated and has since faded into history. 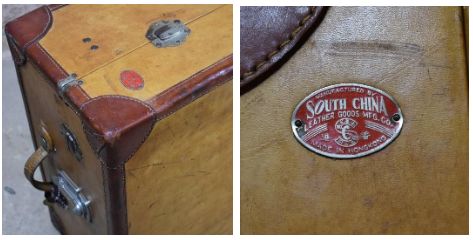 This article was first posted on 31st January 2020.