Left: Singnam Choy (right) with Lam Hau-tak (see Lam Yuen Fong article) and Chau Cham-kwong as heads of the Tung Wah Group of Hospitals in 1948 (WKYP, 1948- 6-19); Right: notice issued by The Ching Hua Co in 1947 to clarify that it had no relations with Tsen Ho Bank which went bankrupt that year and had a similar sounding subsidiary (WKYP, 1947-8-8)

Godowns (or warehouses) have played a critical role in the development of trade and industries in Hong Kong and before the War, the business was dominated by British firms such as Kowloon Wharf, Swire and China Provident. In 1939, an import export businessman by the name of Singnam Choy established The Ching Hua Company (HK) Ltd (香港振華有限公司) which became a leading godown operator by the late 1940s with seven godowns in Kennedy Town and in 1948, the same year when a devastating fire at the Wing On Godown posed the greatest threat the industry had faced, Choy led a group of Chinese godown owners in the formation of HK Chinese Godown Association (香港華商貨倉聯合會, renamed HK Godown Association, the group’s website listed early 1950s as its inception date which is inaccurate) to protect the interests of Chinese godown owners and served as its first chairman. In addition to his godown business, Choy was also in the related business of shipping and import/export and was a distributor of Japanese industrial equipment.

Born in 1900, Choy was a native of Nanhai in Guangdong province. Little information is available about his career before the establishment of Ching Hua in 1939 and during the Sino-Japanese War, he sent supplies to Kweilin to support the KMT war effort.

By the late 1940s, Ching Hua, which had its offices in the Exchange Building in Central, was operating 7 godowns in Western district – Godown #1 at 1A Sands Street, Godown #2 at 38 The Praya, Godown #3 at 39 The Praya, Godown #4 at 163 Connaught Road West, Godown #5 at 164 Connaught Road West, Godown #6 at 27 The Praya and Godown #7 at 22 The Praya. Choy also established the affiliated firm of Safety Godown & Mortgage Co (安全貨倉) which provided godown and mortgage services and despite the similarity in names, there was no relationship to Safety Godowns, the listed operator of godowns founded in 1960 by the Lu family of South East Asia Holdings.  He was supported in the business by Y.P. Choy (蔡炎平) and M.L. Choy, who were secretary and assistant manager of Ching Hua and likely his relatives.

The early post-War years saw explosive growth in the HK godown industry and although the Dangerous Goods Ordinance was enacted in 1940, overall regulation was relatively relaxed, and many Chinese merchants entered the business, building godowns with varying degrees of safety all over HK and in some cases storing flammable goods in residential buildings.

Left: Article about Singnam Choy leading the effort in organizing the HK Chinese Godown Association in October 1948 (KSDN, 1948-10-16); Right: the Wing On Godown Fire in 1948

On September 23, 1948, a major fire broke out at the Wing On Godowns operated by Wing On & Co in West Point near the Whitty Street tram depot which claimed the lives of 176 people, making it one of the worst fires in HK history. The casualty number was large as the godowns were located on the ground floors of several five-story tenement blocks which had many residents including employees of Wing On and Godown #5 in the middle of the blocks were storing highly flammable goods. In response, the government launched a full-scale investigation and stricter regulations were proposed. Choy led a group of 42 Chinese godown owners to form the HK Chinese Godown Association in October and the 20 directors atits  launch included Wong Ka-yee from Tacksen Shuihing (see article), Tong Ping-tat from Nam Tai Hong (later chairman of CGCC) and representatives from major Chinese trading houses such as Dah Chong Hong and Kin Tye Loong. Wilkie Lam, who was in charge of Wing On Godowns was not listed as one of the founding directors perhaps due to sensitivity but he later joined the group and became its chairman and Fung Yuen-hon of Wai Yuen Cheong (see article) was also involved in the group by the 1950s. At the time, over 55 Chinese godown owners were under threat of being sued by the government for storing caustic soda (aka sodium hydroxide) without a license. Choy as head of the Association came up with two solutions – he acquired three stone vessels from the Philippines which could act as temporary floating storage for industry players who might be affected. He also hired Sir Man-Kam Lo as the legal adviser to the Association and argued that the law was ambiguous and hence the godown operators did not actively breach any laws (TKP, 1948-10-30). He also sent his son Choy Tak-keung (蔡德强), a graduate of Columbia University and son in law of Thai Chinese tycoon Ma Bulakul (馬立群) to the UK and the US to study the latest trends in the warehouse industry to bring back industry best practice to his HK peers. In November, Ching Hua’s Godown #5 became one of the first godowns approved by the Fire Department to store flammable goods. (KSDN, 1948-11-26)

1949 was an interesting year for the HK godown industry as demand soared with the massive influx of refugees from the mainland and exceeded the supply of 700,000-800,000 tons of storage space (630,000 of which occupied by Kowloon Wharf, China Provident and Swire), with firms like Kowloon Wharf which were running out of space referring business to Ching Hua and Choy led an industry wide effort to raise storage rates and lobby the government to provide more land for construction of godowns in order to meet the demand (KSDN, 1949-8-16) 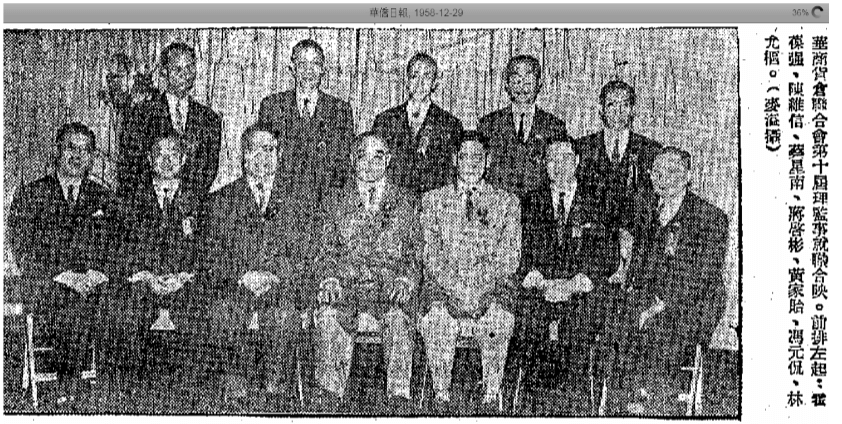 In the early 1950s, the Korean War embargo resulted in many goods being shipped and stored in Macau and as a result Singnam Choy opened a godown in Macau to provide storage for industrial supplies and metals. In July 1952, a bomb was thrown into the Macau godown, resulting in 1 death and 4 injuries although the damage to the warehouse was minimal. (KSDN, 1952-7-23)

Outside of godowns, Ching Hua was also a shipping agent and in 1956, it served as agent for the Japanese cargo liner “Manchuria Railway #3” (第三滿鐵丸) operated by Shin-Nippon Kisen which offered one of the few direct routes from HK to New Zealand that was cheaper the typical shipping routes to New Zealand which required a stop in Sydney. (TKP, 1956-10-10)

In the 1950s and 1960s, Choy Singnam was also active in trade between Japan and Hong Kong and formed Hongkong Japan Trade Promotion Co Ltd (港日貿易促進有限公司), which was incorporated as a firm in 1960 and dissolved in 1966. Articles and pictures below show implies that he was agent for Hosokawa Iron Works (Chang Shun-yen of Maui Kong V-Pein gourmet powder and Yan Choi-yuen of Yan Chim Kee who were both covered in earlier articles were not in the picture but according to the related article were in attendance) and also received millions of dollars in orders for Japanese construction equipment in 1960. 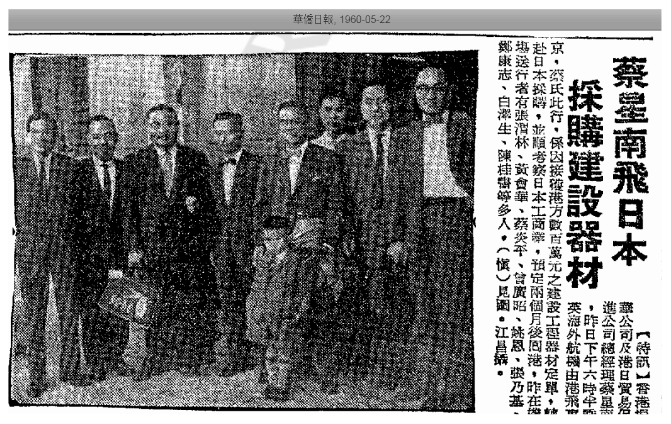 Singnam Choy (third from the left) with friends and family before his departure for Japan to procure construction equipment in 1960 (WKYP, 1960-5-22)

According to the Hong Kong $ Directory in 1974, Ching Hua by then was out of the 4th floor of Jam Fair Building on Des Voeux Road but still had at least one godown at 22 The Praya in Kennedy Town (aka Godown #7). Godown #1 at 1A Sands Street was re-developed into Tai Sang Building (太生大廈) and the other five godowns presumably were re-developed as well. As a firm, Ching Hua was dissolved in 2017.

Outside of business, Singnam Choy was active in community affairs and severd on the board of the Tung Wah Hospitals in 1948-49 and was a standing committee member of the pro-Beijing Chinese General Chamber of Commerce. 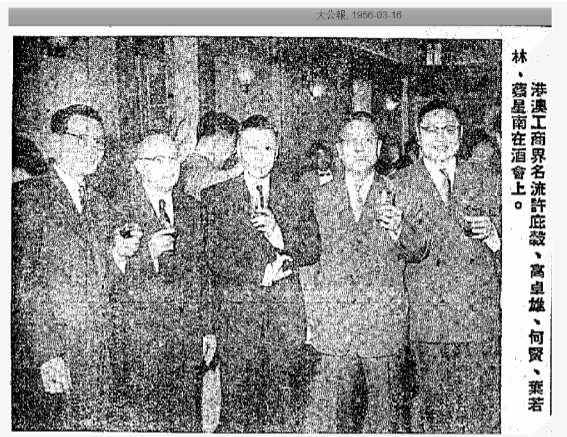 Article about the Wing On Godown Fire: