Tymon Mellor: While researching mines in Hong Kong, I came across this newspaper article from the Hong Kong Daily Press, dated the 12th October, 1889, on the discovery of a new mineral find by Mr J Grant Smith. The mineral ore was exposed following a storm the previous May and considered to be “a payable mine”. The location is described as “within half-an-hour’s walk of the Clock Tower”.

Anyone know where this could have been located? 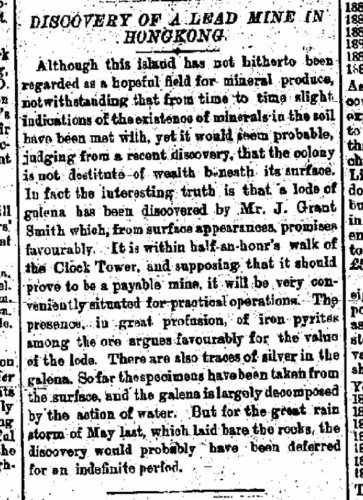 Tymon adds: “The clock tower mentioned would most probably be the one located in Pedder Street from 1862 to 1913. That would put the mineral find about 600 metres away from the clock tower walking up hill.

The reference to water suggests it was found in or close to a stream
This 1845 map with a 600m circle shows the streams. I suspect the vein was not as promising as suggested in the article as I can find is no reference to a mine in later documents.” 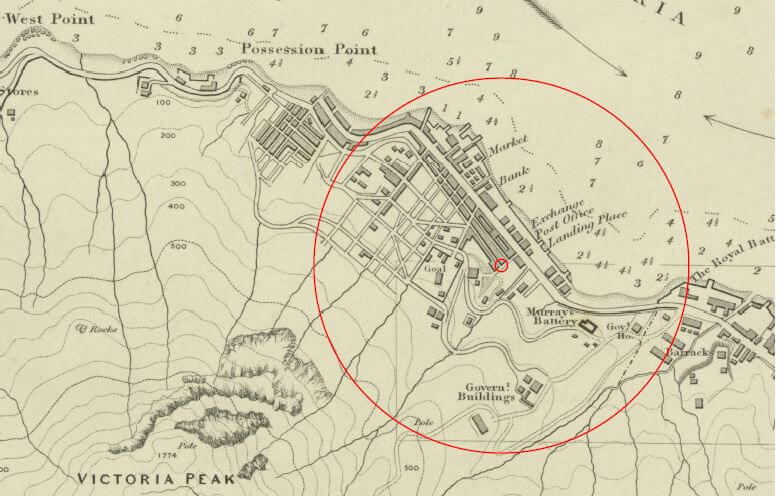 Matthew Chiu, one of the collaborators in the writing of the book “Hong Kong Mining History” (see below), “This is new information and we will definitely need studying. A map, HK locality of mines and mineral prospects published by the Government in the 1970s show only Mount Butler, North Point and Shek O have recorded prospects. My best guess is North Point as a beryl deposit is recorded for Shek O and it would take more than 30 minutes to reach Mount Butler.”
Trudy Kwong responded after being contacted by Matthew: “The clock tower mentioned would almost certainly be the one in Pedder Street. Geologically Central is largely granite (Kowloon granite) and it indeed has mineralization – pyrite, chalcopyrite, galena etc due to hydrothermal reactions.

It is not possible to trace the exact location of the ‘mine’ it would be just a small-scale mineralization and the region has been urbanized. ‘Lode of galena’, means host in veins.

Recently I also found a pyrite-chalcopyrite-molybdenite sample (hydrothermal veins) in a cut-slope in Ho Man Tin. So it is not uncommon to find minerals on the surface even today.”