Some notes on travel in the NT before the KCR

Lawrence Tsui: My father, Paul Tsui moved from Hong Kong Island to live in Fanling in 1925 when he was around ten. He spent his teenage years before the War growing up in Fanling, travelling daily on the KCR to go to Wah Yan College at Nelson Street in Mongkok.

Incidentally, decades before the KCR  was built [the “British Section” Tsim Sha Tsui to Lo Wu was officially opened on 1st Oct 1910], he was told that people traveled to Fanling by several routes:

One was by boat from Hong Kong Island to Shenzhen via Deep Bay & the river to Lo Wu; then walk south from Shenzhen to Fanling. 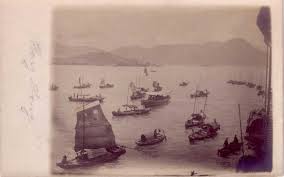 Alternatively, one could travel by boat to Kowloon City landing near Soong Wong Toi, then walk to Ngau Chi Wan, up to the Kwanyin Temple at Tzi Wan Shan, then across the ridge of Lion Rock to Shatin, down to Tsang Uk Wai passing the Amah Rock in the valley.

One had the option of walking to Siu Lek Yuen to take a sampan across Tolo Harbour to Taipo; or walk there via the Che Kung Temple, Fotan, Ma Liu Shui, Cheong Shu Tan. 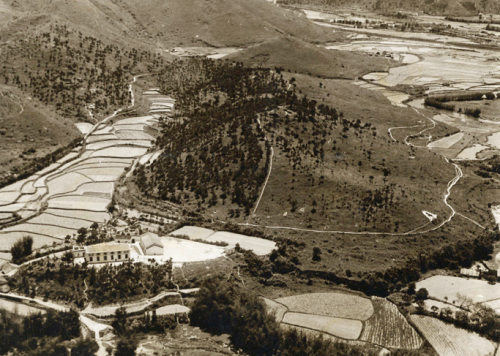 From Taipo, one walked along the Lam Chuen river to Kau Long Hang and Tong Hang to Shum Him Tong Village which was along the main thoroughfare between Taipo & Shataukok in those days. On the way to Shataukok were: Lo Wai, Tzi Tong Chuen, Tung Kok Wai, Ma Mei Ha, Wor Hang, Hung Leng, Lai Tung, Shek Chung Au.

James Hayes added in July 2014: As I understand the pre-KCR situation in the mainland NT was much as Lawrence Tsui has described. Hong Kong and NT people got about much as described, by boat and/or on foot, as best suited to their destinations and needs. Burden bearers were many, and in the absence of roads and wheeled vehicles goods and produce had to be carried. For a contemporary statement on the state of communications before the opening of the railway in 1910, see Hon. Gershom Stewart’s reminiscences in the Legislative Council statement in that year, as repeated in my book The Great Difference:  Hong Kong’s New Territories and its People 1898-2004 (HKUP, 2006, and pb 2012, p.22 with note 34 on page 192).
As for the names in use for the paths and tracks of the time, and long before, my understanding is that the “official roads” were those used by the government officials and soldiers to travel  between principal places in the region when they did not go by boat. These included the pathway which led from Kowloon City over the Kowloon Hills to the ferry in the Shatin valley, and from the landing place on the other shore of the Shatin inlet across more hills to  the north.  This line had been improved with stone in part.
As for “horse roads”, I really cannot say anything useful, other than that I cannot recall having heard this term in the 1950s when I first served in the present Sai Kung and Islands Districts of the NT – however I was not looking out for this sort of thing.