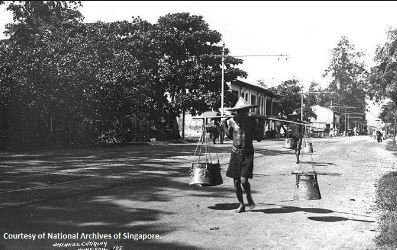 This task went on certainly during my time in HK primarily servicing Western District’s old properties with no drains or sewage pipe-work. I recall it was all dumped into barges at Kennedy Town and taken out to sea for dumping. You could smell the stench from the barges from the inter-island ferries. Most of these properties were swept away by the forced urban renewals of large areas in the 1980s and 90s.

I don’t remember if urban night soil was used as fertiliser on New Territories farms. I think it was just gathered locally. The practise of spreading it on fields was quite common just over the border much to the chagrin of many Gwaipors when they found out where their local and supermarket lettuce and vegetable purchases had originated.”

Honey-bucket – A latrine-receptable for excreta: Military: from 1914…probably earlier, and certainly later, eg in the Far East, especially in Hong Kong where the night-soil is still, 1980, removed from older dwellings by municipally-employed ‘honey-bucket women’. (1)

After the war, the Lai family continued to live in Queen’s Road East. The flat only had a kitchen but no washroom. The residents took a bath took baths or emptied their bowels at a corner of the kitchen behind a curtain. At midnight, someone would come for the night soil collection which was commonly known as ‘emptying the honey bucket’. The honey bucket was shared by different households but each had their own spittoons. (2)

And Hong Kong? Can you expand on what IDJ told us at the beginning of this article?