From the 1920s to 1960s, Mak Ming Kee was a leading brand of toothbrushes in South China and Southeast Asia which started in Canton before moving its base to Hong Kong in the 1930s. In the 1950s and 1960s, the proprietors of the firm also extended its business to the burgeoning plastic industry.

A native of Samsui district in Guangdong province, Mak Ming Kee’s founder Mak Wing-cheung (麥榮章, 1891-1953) received his early education in Canton and learned how to make to make toothbrushes from his father and joined the industry early on. In 1921, he started Mak Ming Kee Tooth Brush Manufactory at 8 On Wo Lane in Canton with a few workers making toothbrushes by hand with daily output of no more than 100 toothbrushes. The first-year sales were only $5000 but soon the brand became popular in South China and in 1924, the firm relocated to larger space at 99 Yuk Tsi Lane and the number of workers also increased from a dozen to over 100 and daily production exceeded 1000 tooth brushes with sales exceeding $40,000. To take the firm to the next level, Mak Ming Kee switched from hand made to machine made in 1931 and introduced sterilization to enhance the hygiene of its products.

The strategy paid off and Mak Ming Kee relocated to even larger space at 7-17 Haipon Street, Nam Wah Road East in the Honam section of Canton in 1934 where it employed over 300 workers and produced over 4000 tooth brushes per day. The next year (1935), Mak Ming Kee registered its trademark with the Chinese and the Dutch governments to expand its sales nationwide and in the Southeast Asian markets (Indonesia being a Dutch colony at the time) and Mak Wing-cheung visited Singapore to promote his products and explored trademark registration. (南洋商报, 17 April 1935, Page 5)

In 1936, Mak Ming Kee opened its plant in Kowloon City in Hong Kong to take advantage of the trading port status of HK. That year, the firm had combined workforce of 400 workers making 5000 tooth brushes per day and its sales exceeded $190,000.

By 1940, Mak Ming Kee was also registered with the British colonial government in Singapore and received preferential tax treatment for exports from the customs department within the British Commonwealth. It had built a larger 2-story, 12000 sq ft factory at 10 Ma Hang Chung Road in To Ka Wan (since re-developed into Cheung Wan Building) and converted the original plant in Kowloon City to a dormitory for the workers while maintaining its office on the 3rd floor of the Ho Tung Building at 176 Queen’s Road Central.  That year, Mak Ming Kee had 600 workers making 6000 brushes per day and achieved total turnover of $230,000 that year.

After the Japanese occupied Hong Kong in 1941, the Kowloon City site was demolished to make way for the extension of the Kai Tak Airport. Production under Japanese occupation was limited as sales were severely impacted while part of the To Kwa Wan plant was destroyed by Allied bombs.

After the War, production remained limited due to issues associated with supply of raw materials (at the time toothbrushes were made from bristle and cow bones) and foreign competition. In the late 1940s, the factory had $1 million worth of equipment including 40 machines and ten motors with 50 horsepower. It employed up to 1000 workers and had daily production capacity of over 10,000 toothbrushes. 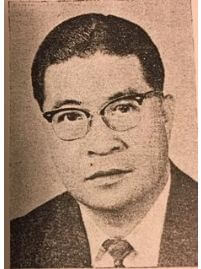 Mak Wing-cheung was succeeded at Mak Ming Kee by his son David Mak Tak-tim (麥德甜) and son in law Ching Pak-san (程柏山). Born in Canton in 1914, Ching was also managing director of two Chinese banks – Yau Tak and Hung Tak (鴻德) and the tea trading firm of Yue Tak (裕德) in addition to deputy manager of Mak Ming Kee in 1953. (南洋商报, 8 May 1953, Page 6). Under the leadership of the second generation, the firm continued to sell well locally and in Southeast Asia. In 1954, the firm donated 6000 dozens toothbrushes for the charity sale during the HK Products Expo to benefit residents affected by the Shek Kip Mei fire. (WKYP, 1954-1-7)

In the 1950s, the plastic industry exploded, and plastic also replaced animal bones as raw materials for toothbrushes. In addition to making plastic toothbrushes at Mak Ming Kee, Ching became the owner of Gold Luck Plastic Works (幸福塑膠廠), which had its factory on Tonkin Street in Cheung Sha Wan and also served as honorary treasurer of the HK Plastic Manufacturers Association where he worked alongside industry pioneers such as Chieng Han-chow, Norman S.K. Young and Lam Leung who have been covered earlier on the website (see articles). In 1960, Ching’s wife Mak Sau-ying (麥秀英) together with the wife and mother of John Cheung Yuk-leung (real estate developer and joint venture partner of Daimaru) spent three weeks in Japan sightseeing and visiting plastic factories.  (WKYP, 1960-6-4) By the 1960s, Mak Ming Kee’s offices was still located in the Ho Tung Building and David Mak and his brother hosted a Chinese New Year banquet for staff in 1965. (WKYP, 1965-2-12)

Mak Ming Kee was renamed Mak Ming Kee Tooth Brush and Plastic Factory although it did not appear to have incorporated. A Mak Ming Kee Industrial Co Ltd was incorporated in 1966 but was dissolved in 1972. By the early 1990s, Mak Ming Kee’s address was listed at Ko Leung Industrial Building on Wai Yip Street in Kwun Tong. As for Good Luck Plastic, it was incorporated in 1970 and is still a live company. In 1990, its address was listed as Mow Hing Industrial Building on Wai Yip Street in Kwun Tong and was engaged in manufacturing of ornaments, stationary, plastic mirrors and toys with Ching Pak-san still listed as its manager.

This article was first posted on 20th January 2020.