HF: This article has been extracted from Twentieth Century Impressions…All images are attached to the article.

I cannot find any information about the “Imperia del Mundo” Manila cigars mentioned in the article or the “special brand known as El Oriente”.

“It was in 1868 that Mr. Kruse, a shrewd man of business, laid the foundation of the extensive import trade in tobacco, cigars, and fancy goods now carried on under the style of Kruse & Co. by Messrs. C. W. Longuet and J. Meier. Mr. Kruse died in 1874, and many changes of partnership followed, but the business has prospered, and to-day the firm is the leading house of its kind in the Colony, with a carefully guarded reputation for supplying only the best class of goods.

[You can just make out the company name over the shop entrance in this enlargement.] 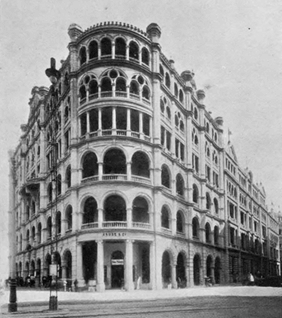 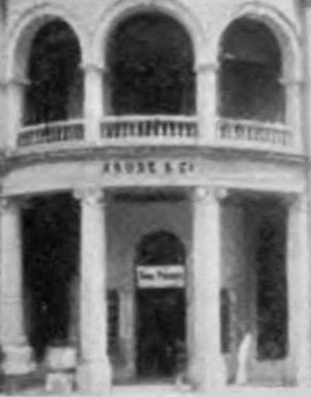 Messrs. Kruse & Co. are agents for Messrs. Valfiadis & Co.’s and Messrs. A. G. Cousis & Co.’s Egyptian cigarettes; they are the sole importers of the “Imperia del Mundo” Manila cigars; they import the special brand known as “El Oriente” direct from the factory; and they are the only firm shipping cigars direct from Havana in wholesale quantities to Hongkong.

They deal both with the Tobacco Trust and with independent companies, and are thus able to meet the requirements of all customers. Smokers’ requisites of every kind are stocked in abundance.

The house has taken the lead in other directions, too, for it is the only one importing continental fancy goods, including china, table and wall ornaments, fancy baskets, glass vases, and ware of special design, &c. 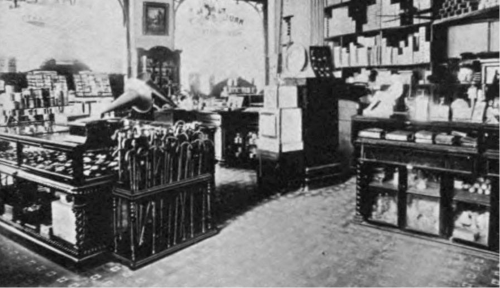 Other lines comprise electro-plate, toys, picture postcards (which latter the firm were the first to introduce into the Colony), and the well-known “Divinice” brand of perfume, distilled by Messrs. Wolff & Sohn.

The firm also deal largely in incandescent gas fittings, and were the first local agents for the “Welsbach” burners now in general use.

This does not by any means exhaust the list of agencies held by the firm—for they represent the “Columbia” Cycle Company, the German newspaper,Oslasiatische Lloyd, and numerous smaller interests—but enough has been said to show the extent and diversity of the trade carried on by them.

The proprietors visit Europe in turn, one buying goods in Hamburg whilst the other is supervising the business in Hongkong.”