Kiu Fung Investment (僑豐建業) and the Trio behind the Firm

York Lo: Kiu Fung Investment (僑豐建業) and the Trio behind the Firm 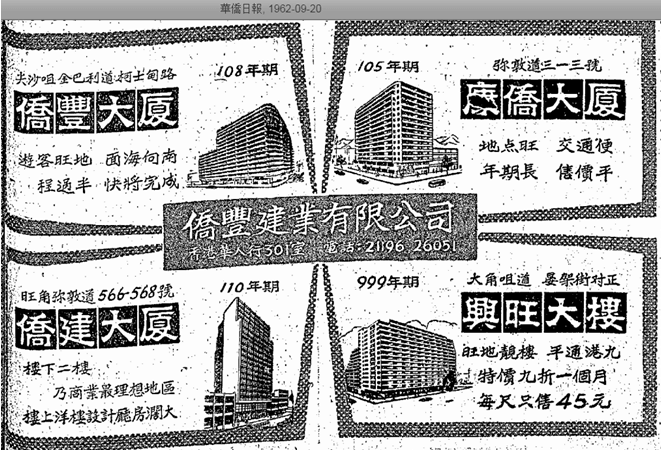 When it comes to partnerships in the HK real estate industry, the first name which came to most people’s mind is probably Sun Hung Kai, which derived its name from its three founding partners (aka three musketeers) – Fung King-hey of Sun Hey Co, Kwok Tak-seng of Hung Cheong and Lee ShauKee and started out as Eternal Enterprises with couple more partners (see article on Kwok Tak-seng for more details). Another prominent trio which formed a partnership at around the same time in the 1950s were Kwan Kai-ming (關啟明, 1901-1983), Chui Yu-chuen (崔雨川) and Tseng Cheng (曾正, 1915-2008), who joined force to incorporate Kiu Fung Investment in 1957 with HK$3 million in capital and the SHK and Kiu Fung trios were all involved in the founding of the Real Estate Developers Association of HK in 1965.Kiu Fung was responsible for many high-profile projects in Kowloon, especially in the Tsim Sha Tsui area, in the 1950s and 1960s. The three partners were also directors of the Tung Wah Group of Hospitals with Tseng Ching having served as the group’s chairman and being one of the organization’s biggest donors in its history.

The eldest of the trio was Kwan Kai-ming, a native of Nam Hoi whose father lived in Shanghai and who himself lived and worked in the Philippines in the 1930s in the import export trade before moving his whole family to Hong Kong in 1948. It is likely that Kiu Fung was named after Kwan’s overseas Chinese background as Kiu is the Chinese character for overseas Chinese. Kwan was also chairman of the Wing Lok Theatre in Hunghom, which operated from 1953 to 1970. Chui Yu-chuen was a native of Panyu who was also involved in Ming Chuen Construction (明川建築) with Kwan Kai-ming (as the firm’s name is the combination of the last character of each of their Chinese name) and Alhambra Investment with Cheng Keng-chuen (to be covered) which re-developed the Alhambra Theatre into Alhambra Building. A native of Zhongshan in Guangdong province, Tseng Cheng grew up in Tientsin where his father was a merchant and came to HK when he was 13 where he studied at DBS. He later began his career as a construction worker and civil engineer in Canton before returning to the Hong Kong after the Japanese occupation to start Tseng Brothers Construction (正記建築) as a general contractor and property developer with his younger brother Tseng Pei (曾憲備) in 1947.

The three directors of Kiu Fung from left to right: Kwan Kai-ming, Tseng Cheng and Chui Yu-chuen from an article about their joint donation of $1000 for scholarships in 1965 (WKYP, 1965-2-9)

The trio saw huge potential in post-War Tsim Sha Tsui, which at the time was relatively undeveloped at the time and Tseng for example had already built the Tseng Brothers Building (正記大廈) at 91-95 Austin Road and was developing Nathan Apartments (彌敦大廈) at 506-512 Nathan Road when Kiu Fung was founded. The first major project for Kiu Fung was the 15-story residential building Ocean View Court (海景大廈) at 21-27 Chatham Road, which was the tallest building in the area when completed and cost over HK$10 million to construct. The building was quickly sold out and allegedly netted profits of over $8 million.

The next 2 projects after Ocean View Court were United Mansion (統一大廈) at 105-111 Shanghai Street (side facing Jordan Road 16 story while side facing Shanghai Street was 12 story) in Jordan at the former Jordan Road Gas Works which were sold for roughly $10000 per flatand WahKiu Mansion (華僑大廈) at 76-84 Tai Po Road in Sham Shui Po. 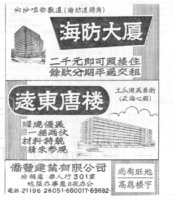 Other Kiu Fung projects in the 1960s include Kiu Kin Mansion (僑建大廈) at 566-568A Nathan Road, Hong Kiu Mansion (康僑大廈) at 313 Nathan Road, 19-story Kiu Wai Mansion (僑偉大廈) on Chatham Road, Kiu Yuen Mansion (僑苑大廈) at 245-247 Prince Edward Road, Kiu Yip Mansion (僑業大廈) at 16 YuetWa Street in Kwun Tong, Po Hing Mansion (寶慶大廈) in Sheung Wan and Lee Hoi Factory Building (利開工廠大廈) in San Po Kong.Kiu Sun Factory Building (僑新工廠大廈) in Kwun Tong which was developed in the 1960s but since been demolished was also likely developed by Kiu Fat. Outside of Kiu Fat, the trio were also involved in the development in 3 prominent projects in the 1960s in partnership with other developers such as Henry Fok and Stanley Ho -Evergreen Villa (松栢新邨) on Stubbs Road (to be covered), Repulse Bay Garden (淺水灣新村) in Repulse Bayand the office building Star House in Tsim Sha Tsui.

In 1982, Kiu Fung Investment was dissolved as a company. The Kwan family continued to operate Kai Ming Investment (啟明建業) which was incorporated in 1958 and was taken public in 1973. The assets included in the firm at the time of the IPO included flats in residential buildings developed by Kiu Fung such as Kiu Hing Mansion and Kiu Fung Mansion and other properties developed by Kai Ming such as Kai Fat Building (啟發大廈) in Wing Lok Street in Sheung Wan and Kai Yip Factory Building (啟業工廠大廈) in San Po Kong. Other properties developed by Kai Ming in the 1970s and 1980s include Ealing Court (怡齡閣) at 256A Temple Street, which was built in partnership with E.Wah Aik San (see article) and Austin Tower (好兆年行) on Austin Avenue in Tsim Sha Tsui in partnership with Tseng Cheng and Ng Tor-tai. 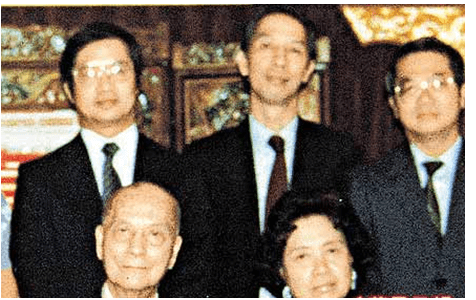 Left: Tseng Pei (seated right) signing the contract for the construction of the Adventist Hospital on Stubbs Road in 1963 as architect G.D. Su (first left) and others looked on (Adventist Archives); Right: Tseng Brothers’ office in the early 1950s on the right before it was re-developed into Tseng Bros Building. 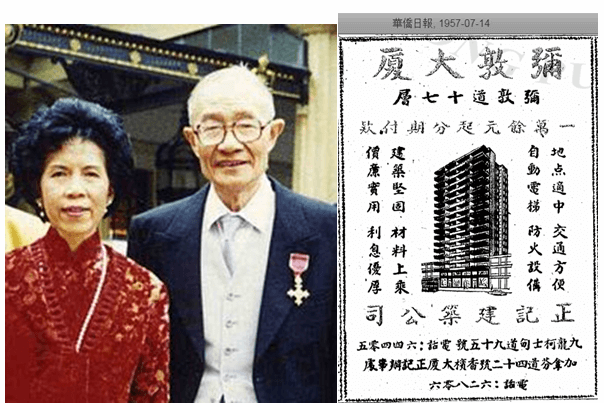 After the 1960s, Tseng Cheng devoted more of his energy to philanthropy while holding on to lots of properties in the Tsim Sha Tsui area and properties he developed such as Evergreen Villa and Repulse Bay Garden. In 1963, Tseng Cheng became the chairman of the Tung Wah Group of Hospitals and leveraged his property development expertise to upgrade the real estate portfolio of the charitable organizations, which at the time owned 90 low-rise buildings generating little income and built a solid foundation of rental income for the group. He was named to the Housing Board by Governor Black in 1965 and served as vice chairman and later chairman of the HK Tuberculosis, Chest and Heart Diseases Association during which he led the re-development of the Ruttonjee Hospital, Freni House and Grantham Hospital and over the decades had donated large sums of money to charitable causes in HK and China. In 2006-2007, the Tseng family sold three of its properties in Tsim Sha Tsui – Swire &Maclaine Building (太古貿易大廈) for $500 million and Ashley Centre (雅士利中心) for $200 million and Bo Yip Building (寶業大廈) for $700 million.

This article was first posted on 14th December.