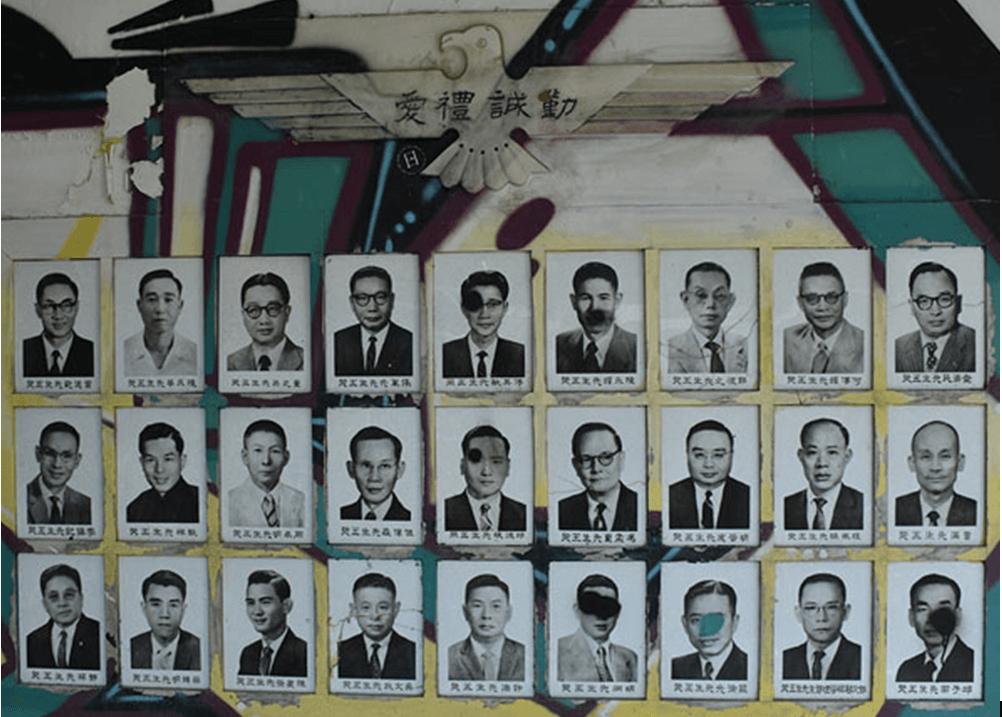 Recently while researching the industrialist Chong Hu-kwong of Tai Loong Weaving I came across above image of donors’ memorial wall (similar to ones you can find at Tung Wah Group of Hospitals and Po Leung Kuk) at one of the buildings of the abandoned Kwai Chung Public School. In the 1950s, Kwai Chung transformed from a rural village to an industrial district and the related increase in population created the demand for a new public school. Founded in 1952, the school expanded in 1959 with the generous support of local business leaders which included a combination of village elders and industrialists whose pictures are featured on this wall which was unveiled in June 1960. The school was abandoned in 2007 and due to neglect, many of its buildings were vandalized with graffiti (including part of this wall).

The leaders on this wall were closely associated with the industrial development of the area (many of whom were also involved with another major institution in nearby Tsuen Wan – the Yan Chai Hospital) and a brief description of each of them below:

Ip Tak-fan (葉德範) – chairman of Tsuen Wan Chamber of Commerce and Tsuen Wan Rural Committee; founder of Yan Chai Hospital but died in 1962 before its completion.

Chan Wing-wah (陳永華) – likely a member of the Chan clan of Sam Tung Uk in Tsuen Wan and related to Chan Wing-yiu who is also on this wall and Chan Wing-on, the first chairman of the Tsuen Wan Rural Committee.

Lee Chun-kee (李鎮記) – likely the proprietor of Lee Chun Kee Animal Co, the largest importer of wild birds and other animals. He operated a bird sanctuary in Lo Wai Village in Tsuen Wan and was referenced in Martin Booth’s Golden Boy

16th graduation ceremony at the Kwai Chung Public School in 1972 with Au Cheung presenting awards to students. This picture appears to be taken in front of the memorial wall and the Union Jack can be seen in the background (WKYP, 1972-11-26)

This article was first posted on 9th January 2018.