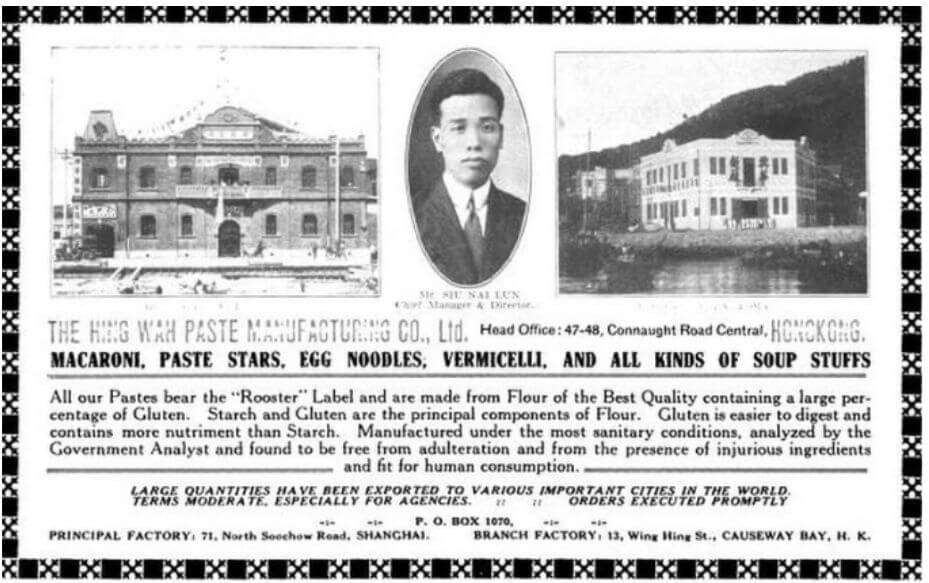 Ad for Hing Wah Paste Mfg in 1921 with pictures of its premises and picture of its chief manager Siu Nai-lun (Official Guide for Shippers & Travellers to the Principal Ports of the World, 1921)

Earlier on the website, we covered three noodle manufacturers – Winner, the maker of the popular Doll instant noodle (founded in 1968), Tin Kee Noodle Products (founded in 1942) and Pak Kut Noodle (founded in 1930s). As it turns out, the history of machine-made noodles in HK went back even earlier to the 1910s when a HK-registered and headquartered firm The Hing Wah Paste Manufacturing Co Ltd operated large factories in Shanghai and Hong Kong and was making macaroni, egg noodles, vermicelli under the “Rooster” brand and was benefiting from a wave of nationalistic fervor after the May 4th movement in 1919 exactly a century ago. Sadly, the enterprise which was backed by many prominent figures barely lasted for less than a decade and has long faded into history.

Hing Wah was formed in Shanghai in 1916 with capital of $50000 and incorporated in Hong Kong in 1917. The firm was the brainchild of the Siu brothers – Siu Nai-lun (蕭乃麟), Siu Chor-nam (蕭楚南) and Siu Fai-nam (蕭輝南) with Nai-lun as the head of the firm as Chief Manager. The brothers operated Shiu Fung Tai & Co (肇豐泰金山庄), a trading firm based out of 47 & 48 Connaught Road Central (also the head office of Hing Wah) in HK which was exporter of Chinese products and manufactured goods and importers of European, American and Australian products. The firm was sole agent for Hing Wah and The Bacchus Marsh Concentrated Milk Co from Australia as shown in the ad above. 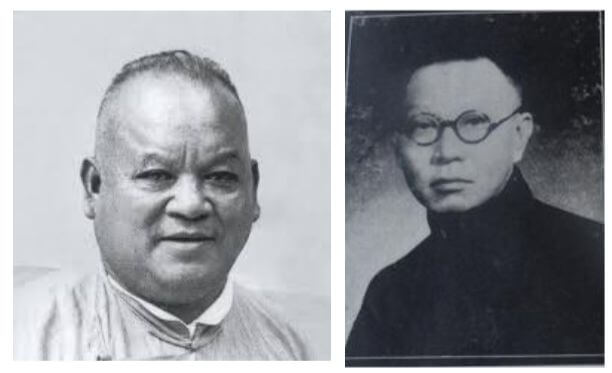 In HK and Shanghai, the Siu brothers managed to secure the financial support of some of the leading Chinese business figures at the time and invited them to join the board of Hing Wah. In Hong Kong, business and community leader Lau Chu-pak J.P. (劉鑄伯, 1867-1922) joined as chairman of the firm. A co-founder of the Chinese General Chamber of Commerce and Hong Kong University, Lau who was comprador of A.S. Watson was an unofficial member of the Legislative Council from 1913 until his death in 1922. Also serving on the Hing Wah board from HK were Wong Kwok-shuen (王國璇) and James Choy Hing (蔡興, 1869-1957), two directors of the retail giant Sincere Co. Wong’s father co-founded Sincere in 1900 with the Ma family and Choy who in addition to serving as chairman of Sincere also started the friendly competitor The Sun Co department store in HK and Shanghai. There might have been an earlier connection as the Siu brothers were involved in representing Australian products and the Wongs and the Choys were Cantonese immigrants who started their businesses in Australia.

In Shanghai, Hsien Kuan-sheng (冼冠生, 1887-1952) and S.L. Sieh (薛壽齡, son of a famous Beijing opera star), the co-founders of the biscuit, confectionary and canned goods giant Kwan Sun Yuen (冠生園) which started out as a preserved fruit store next to the Hsin Wu Tai theater in Shanghai in 1908, joined Hing Wah’s board. Li Yuanhong (黎元洪), the President of China between 1916-17 and 1922-23, was also an investor. While Hing Wah’s head office was in HK, its first factory was in Shanghai at 71 North Soochow Road. According to the Comacrib Directory, the Shanghai manager for Hing Wah was C.T. Tsur.

From inception, Hing Wah, whose name stands for “reviving China”, capitalized on the movement of supporting Chinese-made products, which started in 1905 with the Anti-American boycott and spawned firms such as Nanyang Brothers Tobacco, China Can and Chinese Foreign Knitting Co (all covered earlier in other articles, the latter two received investments from Hing Wah board member Hsien and Choy respectively). Hing Wah’s Chinese advertising and box packaging highlighted the patriotic sentiments in buying their products while also emphasized product quality as its products were certified free of harmful ingredients by HK government analysts and British chemists.

During 1918, Hing Wah became a public company in Hong Kong with capital increased to $200,000 and at the end of 1918, Hing Wah increased its capital yet again to $1 million. Within 2 years of launch and thanks to the distribution effort of Shiu Fung Tai, Hing Wah’s products was widely known not only in China but in Europe, Americas (as shown in the Canadian ad above) and beyond.

In October 1919, Hing Wah opened its HK factory at 13 Wing Hing Street in Causeway Bay in a well-attended ceremony presided by Lau Chu-pak with music supplied by the YMCA band. Lau’s speech was grandiose in which he stated that “our little ceremony today inaugurates a new era in the history of Chinese industries in Hongkong”, noting that “there have in the past been many such undertakings in this colony, but with one single notable exception, they have somehow never developed to any appreciable extent” and “it was only recently that the Chinese have awakened to the fact that, in order to be a factor in world trade, they must improve their crude methods and unskilled labor, and operate on a much larger scale than they have hitherto done. Hence some of the old native industrial concerns in China have increased their capital and many new ones have sprung up, fully equipped with modern appliances and with substantial capital. Of these, the Hing Wah is one” (HK Telegraph, 1919-10-27) 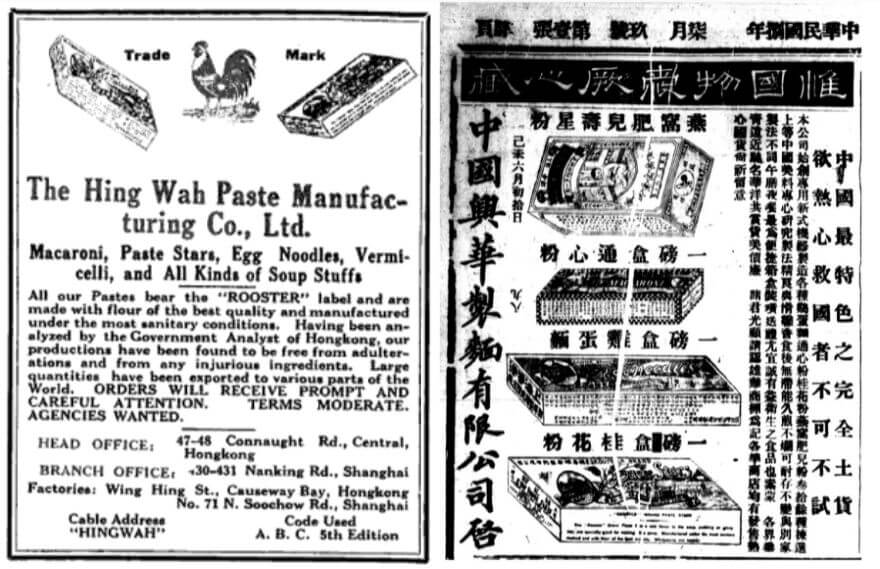 As Hing Wah grew, it quickly became interested in vertical integration to reduce its reliance on flour suppliers and built a 1500 barrels flour mill with equipment imported from Wolf & Co in Chesterburg, Pennsylvania and staffed by Chinese and American millers. The mill used strong glutinous wheat from Manchuria and aspired to produce flour in quality competitive with the best American and Australian flour.  (Northwestern Miller, 1920)

The move into flour production did not pay off and in April 1923, the board of Hing Wah led by Wong Kwok-shuen (who presumably succeeded Lau Chu-pak who died in 1922) filed to voluntarily wind up the firm due to liabilities (HK Government Report, 1923)

As a firm, Hing Wah was dissolved in 1927 with “Cheung Choi” (likely the same person as Choy Cheung, the brother of Hing Wah director Choy Hing) listed as liquidator. (HK Government Report, 1927)  The Shanghai flour mill appeared to have been absorbed by the Yung family.

As for Siu Nai-lun, based on government reports, he acquired preserved fruit manufacturer Victoria of 224 Des Voeux Road West and Nga Tsin Wai Road in Kowloon from Chin Ching-po in July 1927 only to sell the firm several months later. In October of the same year, he was arrested for nonpayment of debt and was thrown into Victoria Prison. (see below article) 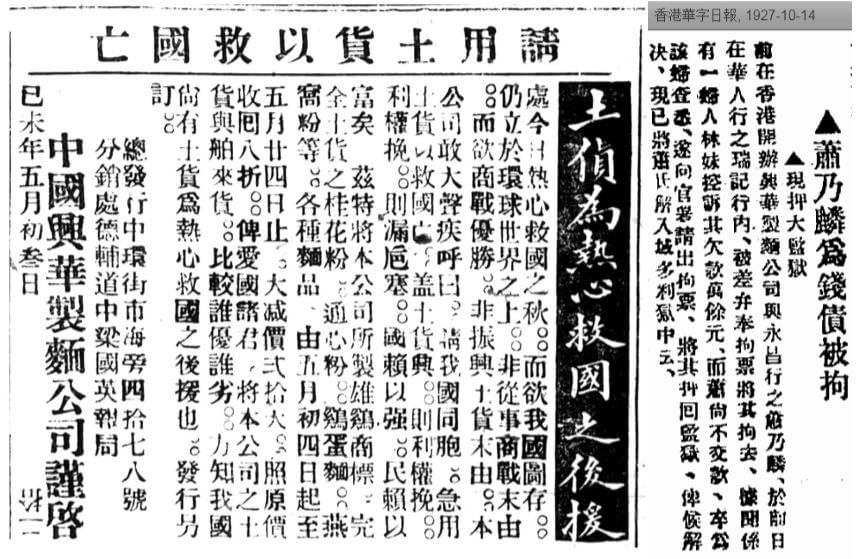 This article was first posted on 4th October 2019.