Production of aluminum (or aluminium based on the British spelling) sheets and products in Hong Kong began in 1949 with two firms – Wah Chong, the maker of the “Five Stars” brand of aluminum ware which opened its branch factory in HK that year and traced its roots to Shanghai in 1916 and Ting Tai Metal Ware Factory, the maker of the “Three Rings” brand of aluminum ware which was founded that year by Chiuchow industrialist Choi Cheung-kwok. The two firms merged and formed Tingtai Wahchong in 1957 and teamed up with four other competitors to form a sales consortium under the name of Aluminium Manufactures of HK the same year. Below are their stories which is essentially the history of the aluminum industry in HK and China.

Wah Chong began in 1916 in Shanghai as Wah Chong Printing & Can Factory (華昌印刷罐廠) and its founder K. Y. Kuo (郭耕餘, 1890-1964) is recognized as the father of the aluminum industry in China. Kuo, who also went by Kuo Hsueh-hsu (郭學序), was a native of Ningbo and followed his father to Shanghai at a young age. In its early years, Wah Chong primarily focused on making metal products such as screws and bottle caps but soon turned its attention to aluminum, which was dominated by products imported from Japan at the time. Wah Chong purchased foreign aluminum sheets to make spoons, saucers, bowls, basins and other domestic appliances and became a pioneer of local production in China.

In 1930, the firm was renamed Wah Chong Yu Kee Aluminium Manufactory (華昌餘記鋼精製造廠, Yu Kee after Kuo’s name) and began producing aluminum sheets to reduce its reliance on imports. In 1934, Wah Chong Yu Kee and five of its competitors formed China Aluminium Sales Organization (中國鋼精營業所), a consortium to coordinate its sales efforts against foreign competition. In 1936, Wah Chong started exporting its products to Southeast Asia where it had gained popularity thanks to the support of overseas Chinese who were keen to buy China-made products to support the mainland Chinese effort against Japanese invasion. When the Shanghai Aluminum Industry Association was formed in 1947, Wah Chong remained one of the largest amongst the 23 players and at one point controlled 40% of the aluminum market in Shanghai.

In 1948, K.Y. Kuo teamed up with his friend Woo Sze-tang, the manager of China Products Co to establish a branch factory for Wah Chong in Hong Kong to cover the Southeast Asian market and better supply of materials as the Civil War situation deteriorated in the mainland. The 52000 sq ft HK factory at 23-33 Wing Hong Street near Castle Peak Road commenced operations in 1949 and included a rolling sheet mill to produce aluminum sheets for its own use and for other metal factories with the latest cutting, dyeing, electroplating and mold making equipment. 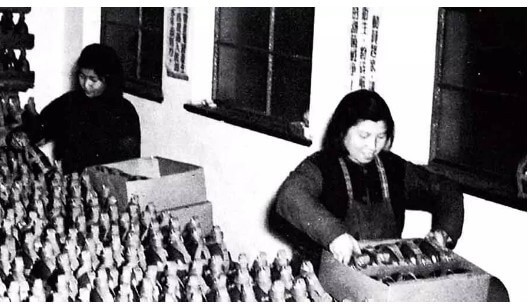 In 1949, K.Y. Kuo and his sons Stanley Kuo Cheng-dai (郭正達, 1923-2009) and Charles Kuo Chen-tao (郭正道 1929-) moved to HK three months before the Communists occupied Shanghai and left the management of Wah Chong’s Shanghai operations to his daughter Guo Xiuzhen (郭秀珍, 1917-2010), who had attended University of Shanghai and graduated from Cheloo University in Chengdu during the War and previously worked as a biology teacher in Chunking and the forex department head at a bank in Shanghai before taking over Wah Chong in Shanghai. This arrangement was common with many other Shanghainese industrialists who had substantial interests in the mainland and moved to Hong Kong in 1949. In the early years of the People’s Republic, Wah Chong was very supportive of the new regime and its factories manufactured products for the frontline during the Korean War. 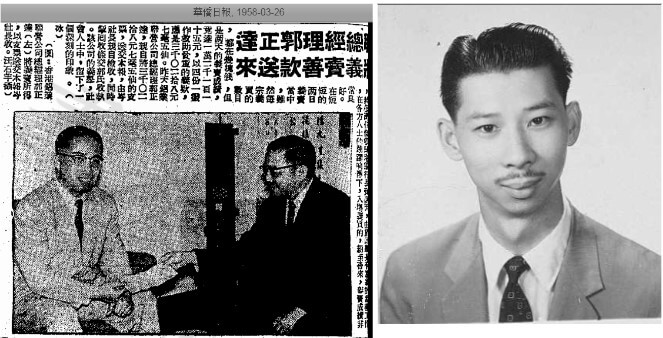 In 1950, Wah Chong Metal Works was incorporated in HK with K.Y. as chairman, Woo Sze-tang as vice chairman and Stanley as factory manager. By 1952, Wah Chong’s HK plant had monthly production of 60 tons of aluminum sheets and 500 boxes of aluminum ware worth HK$400,000. The firm had office staff of a dozen and over 90 workers and most of its products were exported to Southeast Asia, Middle East and Africa. (WKYP, 1952-12-18)

By 1954, Wah Chong was still the only aluminum ware manufacturer in HK which made its own aluminum sheets with monthly production of 60 tons that were also sold to other metal factories. The raw materials were imported from Canada and then melted for 4 hours and assembled into 2 inches pieces. Then four cutting machines cut the 2 inches pieces into aluminum sheets that were 1/50th of an inch thick. The daily production value of the factory was HK$20000 at the time and the firm was making over 20 different types of aluminum wares which came in over 100 shapes and sizes including a giant pot which was large enough to cook rice for 60 people. (TKP, 1954-12-23, 1954-12-31) By 1955, the total workforce of Wah Chong in Hong Kong exceeded 400. Meanwhile back in Shanghai in October of the same year, Wah Chong’s factory was consolidated into the Shanghai Aluminum Industry Co as part of the public private enterprise movement and Guo Xiuzhen became its deputy manager. She remained in the mainland, only visiting HK once when her father was in his deathbed in 1965 and in fact transferred HK$120,000 from HK to Shanghai in 1961 and transferred aluminum materials and other resources from HK to Shanghai.

Ting Tai Metal Ware Factory was founded in 1949 by Choi Cheung-kwok. Born in Chiuchow in 1913, Choi came to Hong Kong in 1926. In addition to Ting Tai, he also operated the import export firm of Charm Ying & Co (燦然公司) and Grace Artificial Jewellery Manufacturing Co Ltd (麗麗製品廠), which had over 200 workers by the mid- 1960s.

By 1954, Ting Tai had over 200 workers working out of its factory on Castle Peak Road which had over 50 machines while its distribution center was located at 16 Fat Hing Street in Sheung Wan. Its “Three Rings” brand of aluminum ware included over 80 variety of products ranging from kettles, bowls, cups, pots and plates which were exported to Southeast Asia and South America. That year, Ting Tai spent over HK$20000 to build a giant booth at the HK Products Expo in the form of a Chinese palace. 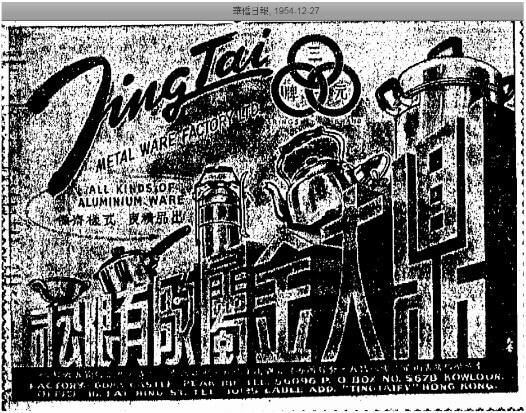 In 1954, an article mentioned that products from the mainland had flooded the Southeast Asian market and as a result Ting Tai and Wah Chong might have to drop their prices by 20%. (WKYP, 1954-8-13)

By late 1956, the price competition domestically and abroad forced Wah Chong and Ting Tai to reach out to four of its local competitors – Diaward Steel Works (led by C.L. Hsu, to be covered), Yuen Fung Metal Works (源豐五金製品廠, led by Wong Hau-yuen, to be covered), Gold Coin Metal Manufactory (金錢金屬製品廠, formed by John Tung of I-Feng Enameling, see articles) and Linson Aluminium (麟笙鋼鐵, led by Tzu-Wei Moh 莫祖惠) to form a consortium. In January 1957, the six firms stopped taking new orders for aluminum ware and the next month, Aluminium Manufactures Company of Hong Kong Ltd (香港鋁業聯營有限公司) was formed with registered capital of HK$1 million to handle all orders for the six firms. Under the new arrangement, the six firms continued to produce its own brands but the pricing and sales were coordinated by the consortium. C.K. Choi was chairman of the firm while Stanley Kuo was managing director and other board members include Ma Pik-wan, C.W. Chu, Wong Hau-yuen and his brother Wong Kam-kong, C.L. Hsu and John Tung. The combined entity had projected export sales of HK$15 million that year (TKP, 1957-2-12; WKYP, 1958-3-1). The consortium unfortunately did not last and as a firm, Aluminium Manufactures Co of HK was dissolved in 1969. 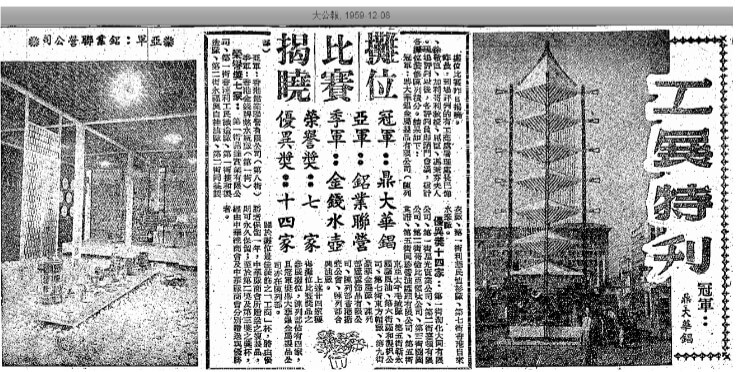 The booth of Aluminium Manufactures (left) and Tingtai Wahchong (right) which won the second and first place at the HK Products Fair in 1959 (TKP, 1959-12-8)

In late 1957, Wah Chong and Ting Tai merged their aluminum ware manufacturing operations and Wahchong-Tingtai Metal Manufacturing Co (鼎大華錩金屬廠) was incorporated with HK$10 million in capital and Stanley Kuo and C.K. Choi as directors (TKP, 1958-1-7).  In 1959, Wahchong-Tingtai and Alumnium Manufactures Co won first and second prize for their booths at the HK Products Expo that year (see above).

In June 1962, one of the large furnaces (15 feet wide, 6 feet tall) at Ting Tai’s plant at 666 Castle Peak Road exploded and 2 workers died and 1 worker was badly injured as a result. In September, the case was heard at the North Kowloon District Court where an engineer from Ting Tai testified saying the explosion was probably caused by steam generated by the wet aluminium plates which the workers shoved into the furnace. The presiding judge T.L. Yang (later Chief Justice) ruled that the incident was an accident and did not find the factory liable although he did recommend that the factory issued proper production safety guidelines to its workers going forward. (WKYP, 1962-9-27)

Left: Workers at Wah Chong Ting Tai watching about a movie about metal production by Yahata Steel Works of Fukuoka (the third largest steel maker in the world at the time) at Tingtai’s factory in Castle Peak Road in 1964 (1964-5-20); Right: Ting Tai booth at the 1971 HK Products Fair (HK Memory)

In January 1967, Tingtai Wahchong received an order through an agent to make aluminium beer mugs for the Playboy brand in the US. A year later, Ting Tai marked the sales of half-a-million beer mugs by presenting a representative of Playboy Enterprises in Hong Kong with a commemorative beer mug.

Under the leadership of Choi’s eldest son Patrick Choi Wang-ho (蔡宏豪), Tingtai Wahchong remains a leading manufacturer of aluminum ware such as kettles and ice buckets with products being shipped worldwide and production had moved north to Nanhai under Nanhai Dinghua Metal Products Co (南海鼎華金屬製品)

Outside of business, C.K. Choi was very active in community affairs and served on the board of Po Leung Kuk, Chiu Chow Chamber of Commerce, Chinese Manufacturers Association (for which he sponsored the founding of the CMA Choi Cheung Kok Secondary School in Tuen Mun in 1984) and Chinese General Chamber of Commerce and his son Patrick has also been involved with these organizations. He is a major donor to the University of British Columbia in Vancouver where his younger son David Choi Wang-on (蔡宏安) is the founder of the Royal Pacific Realty Group and as a result, the C.K. Choi Building, a building on campus known for its sustainable features, was named after him. 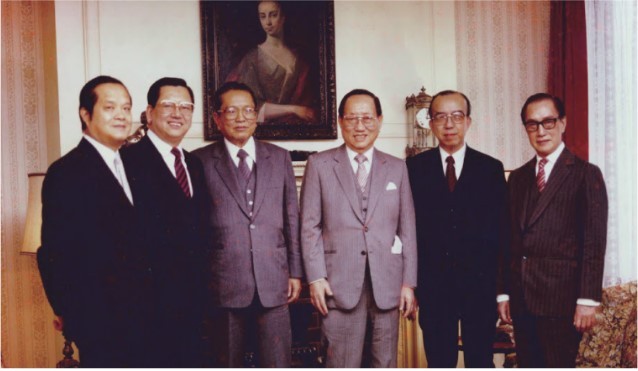 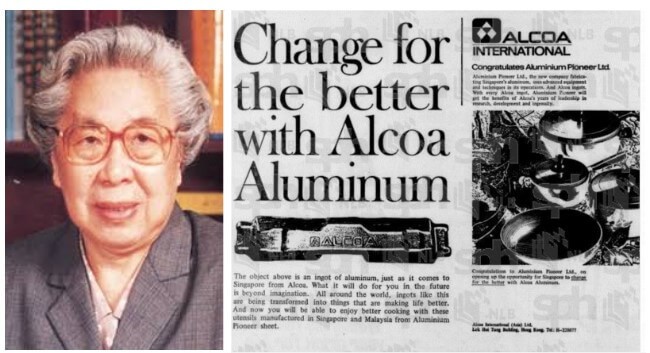 As for Wah Chong, Stanley Kuo shifted his focus to textiles as the proprietor of Woodard Textiles and Gunzetal (to be covered) and Charles Kuo assumed control of the aluminum business as managing director of Wah Chong. In 1968, the Kuo family established the Aluminium Pioneer Ltd (鋁鋒輕工廠), the first aluminum rolling mill in Singapore with Charles as president.  Located at a 50000 sq ft site at the Jurong Industrial Park, the factory which was opened by Economic Minister Goh Keng-swee had production capacity of 1500 tons of aluminum sheets and 65 workers at its launch. $2 million worth of equipment including furnaces and machinery were imported from Japan and HK and 2 Japanese experts were also brought in while 6 workers were sent to Japan for training. The output was sold domestically in Singapore (which had demand of 2000 tons per year at the time), Southeast Asia, Ceylon and Hong Kong as the size of some of its sheets were larger than the ones produced at the Hong Kong mill. The plant also made aluminum utensils using ingots produced by American industry giant Alcoa. By the end of 1969, Aluminium Pioneer was only producing at two thirds of its capacity due to competition from imports. (Straits Times, 1969-12-29)

After China re-opened, Guo Xiuzhen was involved in the founding of AJ Group in Shanghai and visited Hong Kong in 1979 as part of the Shanghai industrialist delegation. As Wah Chong winded down its production, Xiuzhen convinced her brothers to donate and ship all its machinery, which was worth over HK$10 million and weigh over 272 tons, to the Second Light Industry Bureau of Shanghai. As a firm, Wah Chong Metal Works was dissolved in 1999.

This article was first posted on 28th October 2019.