HF: Delfino Noronha (1824-1900) ran a printing press in Hong Kong from 1844, Noronha and Co., a quasi-government printer, which later on became the actual Hong Kong Government Printer. He was also involved in the first regular ferry  between Hong Kong Island and Kowloon though this was apparently little more than a weekend pleasure launch to his “country house” in Yau Ma Tei. 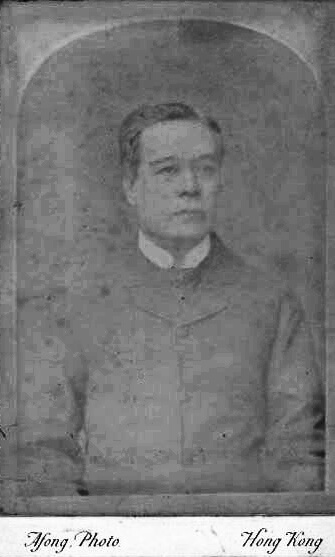 HF: The originally posted article stated that this image was of Delfino Noronha Courtesy: JM Braga Collection, National Library of Australia. However, Matthew Carvalho left a comment below the article suggesting: The photo you identify as Delfino Noronha in this article is incorrect. The photo is of Januario Antonio de Carvalho, chief cashier in Hong Kong, and close friend of Delfino Noronha.

The Website Far East Currents which is interested in the history of the Portuguese – Macanese community says: Delfino Noronha was… a Macanese who seemed to defy conventions in Hong Kong. Rather than work as a clerk or bookkeeper, Noronha set up his own printing plant in 1844 at the age of nineteen. By 1849 his firm, Noronha & Co., was granted the contract to print the “Hongkong Government Gazette”, the colony’s official record and its principal means of communication. It was from this position that Noronha became an important leader of the Macanese community. (1)

The first “Portuguese” to establish a commercial enterprise independent of the British (although they remained clients), Noronha was in a position to hire skilled compositors from his old school, St. Joseph’s in Macau. As the largest employer of Macanese workers in Hong Kong, Noronha and his staff produced finely detailed editions in multiple languages. These attracted the attention of an international audience, including Church leaders, ambassadors, governors, and wealthy merchants, as well as visits from world leaders, including Jose Rizal, a Filipino nationalist. Noronha was held in such high esteem that one Hong Kong governor envisioned Noronha & Co. would remain the colony’s printer “in perpetuum”.

…Noronha also was an early landowner on Hong Kong island, and one of the first investors in Kowloon. In the 1870s he became a partner with another immigrant, Marcus Calisto do Rozário, on ten acres in Tsim Sha Tsui, the first of several attempts to create a Macanese enclave in the “New Territories”. In the process, Noronha built a farm and became a noted horticulturist, experimenting with tropical plants and fruits. During the same period, he operated a steam ship service between Hong Kong and Kowloon, the precursor of the “Star Ferry” that operates over the same route today. (2)

This article was first posted on 17th September 2015.