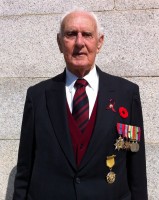 Hugh Farmer: It was with very great sadness that I learnt that Dan Waters passed away in Hong Kong in the early hours of 27th January 2016.

Dan has made many contributions to Hong Kong since his arrival in 1954. I would like to focus here on his participation in our Group.

Pre-website, pre-email Newsletters, The Indhhk Group was initially publicised in the November 2012 Newsletter of the Royal Asiatic Society, HK Branch. The very first person to respond was Dan with his brief message, “I am interested in this proposal.’

He was more than merely interested, he actively participated in and encouraged early efforts to get the Newsletters up and running. He contacted others to seek their involvement and made every effort to publicize the Group.

He was also the first contributor in an early Newsletter with his article about the history of Technical Education and Training in Hong Kong.

Dan’s support continued when we started the website. He was in touch just before Christmas about another proposed article.

Thank you Dan for your continuous support from the very beginning of this project…you will be greatly missed.

This article was first posted on 28th January 2016.

Amongst the many articles Dan wrote or contributed to our Group are:

Technical Education and Training in Hong Kong – a brief account

A Joss-stick Mill in Tsuen Wan