HF: Some brief details about the first ship to be launched in Hong Kong and its maiden voyage to Bombay.

From the newspaper Friend of China 9th February 1843
“Last Tuesday we assembled at the East Point premises of J M & Co to see the first ship launched in Hong Kong from Jardines’ slip. She is called the Celestial. The ship is designed by the late carpenter of the Fort William and is built entirely from teak (i.e. both framework and planking).

She is about 80 tons and belongs to Sir Jamsetjee Jeejeebhoy of Bombay where she is to sail immediately. This is a good start to our local ship-building industry.

We also announce that a resident merchant is importing a patent slip.” 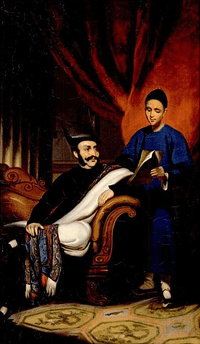 Jejeebhoy and his Chinese secretary
(portrait by George Chinnery)

He first visited China around 1799 and made three more journeys there.

There were dockyards in Bombay when the Celestial was built but possibly only naval.

It would be interesting to learn more about Jejeebhoy’s  connection to China and Hong Kong especially and why he had the ship built at Jardine’s slip.

The same event recorded in the Hongkong Gazette, 9th February 1843: 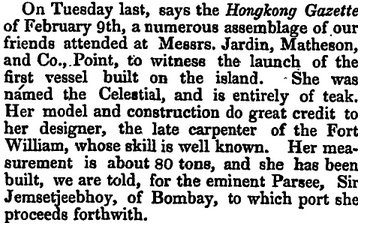 From The Indian Mail 1843 showing the ship left “China”, (presumably Hong Kong), on the 6th March, a month after its launch, called in at Singapore, and arrived in Bombay on 31st March. 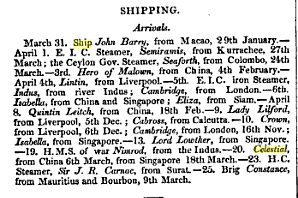 This article was first posted on 2nd April 2014.