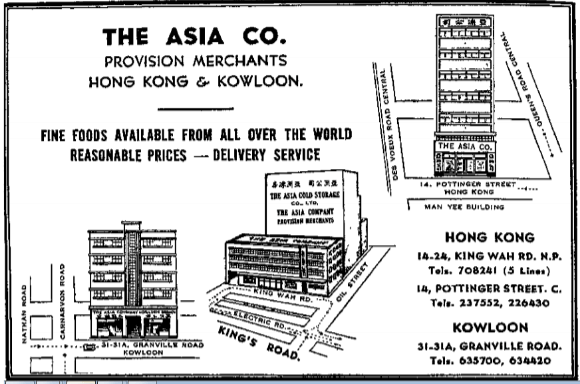 Aside from Wang Kee and Wing Sang Cheong covered in earlier articles, The Asia Provisions Co Ltd (incorporated in 1970) and its predecessor The Asia Company (亞洲公司,1925-1970) has been a major player in the food provisions business in HK since its inception in 1925 and a pioneer in cold storage through the establishment of its affiliate Asia Cold Storage in 1954. The firm also operated supermarkets and home delivery service in the past which was utilized by many local and expat families but currently focuses on larger customers such as hospitals and institutions. 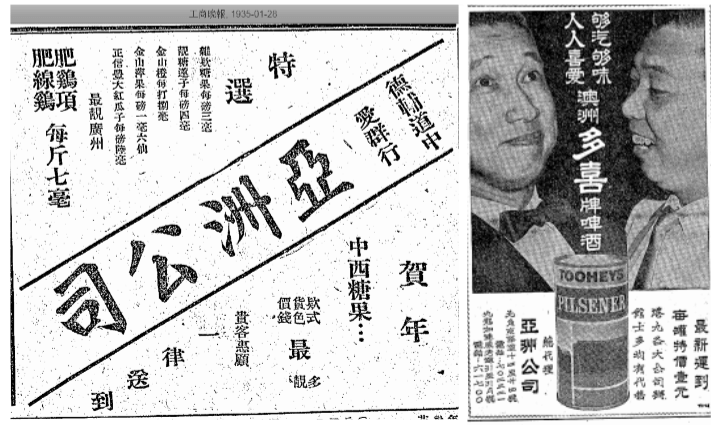 Asia Provisions started its life as The Asia Company in 1925. The firm operated out of the Oi Kwan Building on 63-65 Des Voeux Road Central (now the HK Chinese Bank Building) in the 1930s. From the 1935 ad above, the firm sold Chinese food products such as chicken from Canton and Chinese melon seeds in addition to oranges and apples imported from the US (the firm remains an importer of Sunkist citrus fruits from California today) and foreign candies. A government report from 1940 listed that the firm as the winner of a government tender for provisions for the Stanley Prison, the Victoria Prison and the Female Prison in Lai Chi Kok. During the three years and eight months of Japanese occupation between 1941 and 1945, business was suspended at Asia Provisions as food was rationed by the Japanese military administration. One report (HK News, Jan 14, 1942) mentioned about hundreds of Chinese residents lining up along Des Voeux Road from The Asia Company to Queen Victoria Street (distance of ten blocks) to purchase rice, suggesting that it became one of several sales depots that were established by the new administration. According to the recollections of Barbara Anslow, one of the last surviving prisoners of war who was interned at the Stanley camp, many European families liked hers ordered from The Asia Company by phone or by entering their orders for the next day in a little “comprador” book supplied by the company. She also mentioned that after the Japanese surrendered in 1945, the firm made room for a few tables and chairs and became a thriving restaurant. In 1949, the firm’s main office and grocery department was listed as 15 Queen Victoria Street (right next to its friendly competitor Wing Sang Cheong) while its butchery department was located at 65 Des Voeux Rd.

Left: Ho Pak-hoi (left) welcoming the Australian Commercial Commissioner in HK at The Asia Company’s store in North Point which was showcasing Australian products as part of the Australian Food & Wine Festival in 1963 which over 100 merchants participated (WKYP, 1963-2-17); Right: Asia Company receipt from 1961 (Facebook)

After the War, The Asia Company was led by two unrelated principals with the same Chinese surname – Ho Pak-hoi (何伯愷) and Keng-Po Hall (何鏡波, K.P. Hall, 1914-2013). Under the leadership of Ho and Hall in the 1950s and 60s, The Asia Company was an Army and Navy contractor, expanded its base of hospital clients (which included the Tung Wah hospitals and Castle Peak Hospital), added a Kowloon branch at 31-31A Granville Road and relocated its Central branch to 14 Pottinger Street. It also established its cold storage facility and new head office in North Point (see next section). Ho Pak-hoi, likely the founder of the firm, was a native of Hoiping in Guangdong province and served as the first chairman of The Hong Kong & Kowloon Provisions, Wine & Spirit Dealers’ Association (PWSA) after the War in 1946-47, preceding Ho Che-wong of Chun Hing Bakery (see article). Outside of the food business, he was the chairman of the Ho Clansmen Association and served as a director of Lok Sin Tong. In 1961, his eldest son Ho Shu-wai (何樹槐), a graduate of HKU, married Chiu Chui-lin (趙翠蓮), the seventh sister of wine merchant Chiu Kwok-wang and the wedding banquet, which was held at the Canton Restaurant was attended by over 2000 guests including Legislative and Executive Councilors and many officials and business leaders.

K.P. Hall, who was listed as clerk for the firm in the 1940 Jurors list, was a native of Panyu and was also very active in community affairs. He served for many years as the treasurer of South China Athletic Association, chairman of the Pan U District Association (番禺會所) and became the HK Island Area Commissioner for the St John’s Ambulance Brigade in 1962. 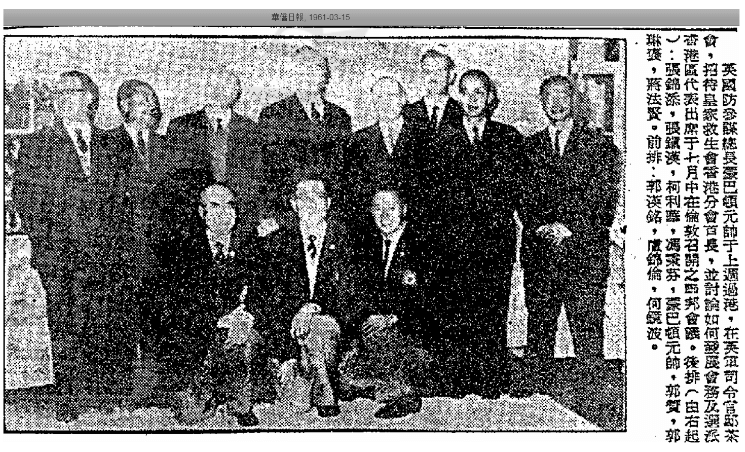 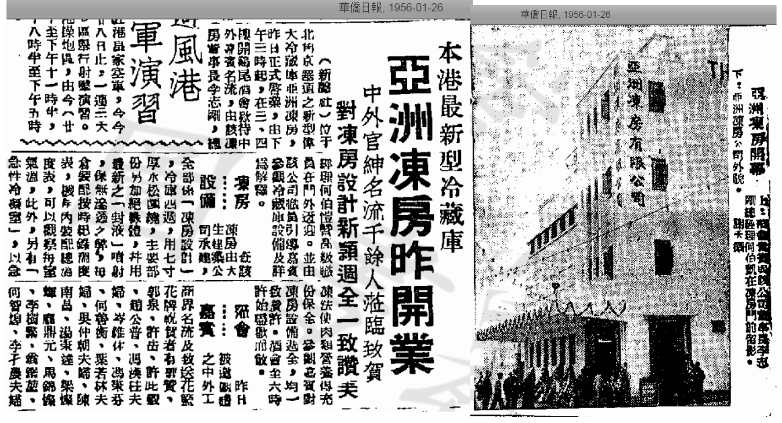 To enhance its position as importers and distributors of chilled and frozen foods such as frozen meat, fresh fruit and eggs, The Asia Company established Asia Cold Storage Co Ltd in 1954 with HK$1.5 million in capital. The firm acquired a site at King Wah Road in North Point and hired Tai Sang Construction to build a new cold storage facility featuring some of the latest cold storage technology at the time such as 7 inches thick insulation walls.  In January 1956, the new Asia Cold Storage facility opened in a major ceremony with over 1000 guests including Sir Kenneth Fung and Ho Sin-hang and became the new head office for the firm. 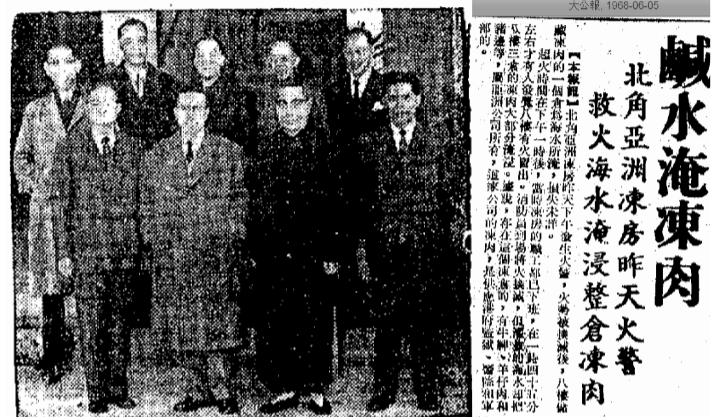 As the cold storage required additional capital, the leather merchant Li Che-kong (李志剛) was brought in as an investor, serving as chairman of Asia Cold Storage and director of Asia Provisions. Li was the eldest son of Li Shou-chi (李壽芝, 1880-1957), the proprietor of Wing Wo Cowhide Co and his brothers included Li Sze-pok (李士博), Li Sze-king (李士競, whose wife Yung Wing-keung was a goddaughter of Lady Victoria Hotung Lo) and Li Sze-leung (李士亮). He operated Wo Fung Trading, a leader in the leather industry and served as chairman of the HK & Kowloon Hide & Leather Traders Association (see article on Kwong Fat Yuen Hong). Outside of business, Li Che-kong was extremely active in community affairs – having served as vice chairman of the Chinese General Chamber of Commerce, chairman of the Central Kaifong Welfare Association. He was also a yoga enthusiast who even demonstrated some of his yoga posts during a meeting for the Rotary Club of HK West. The other two subscribers of capital at the incorporation of Asia Cold Storage were Ho Kwok-kwan (presumably son of K.P. Hall) and Hui Wai-man.

In 1970, The Asia Provisions Co Ltd was incorporated as the successor firm to The Asia Company.

According to the HK $ Directory, the board of directors of Asia Provisions in 1977 included K.P. Hall (as managing director) and his sons Ho Kwok-kwan and Ho Kwok-kwong (何國光), Ho Pak-hoi and his son Ho Shu-wai, Hui Wai-man and Li Che-kong while the board of Asia Cold Storage chaired by Li Che-kong included the same members from Asia Provisions plus Yeung Kai-hi MBE who was superintendent. Ten years later in 1987, Li Che-kong and Hui Wai-man were no longer on either boards and the board of Asia Provisions included the same members from a decade earlier and Li Che-kong’s wife Lui Kam-wah (雷錦華) while the board of Asia Cold Storage  included K.P. Hall as chairman, Ho Pak-hoi, Ho Kwok-kwan, Ho Kwok-kwong, Ip Ng-sheung, radiologist Dr. Robert Li Mow-wing (李茂榮 likely son of Li Che-kong), Hui Cho-yee (presumably related to Hui Wai-man) and Lai Hau who was superintendent. In 2005, Henderson Land acquired the Asia Cold Storage site in North Point for HK$620 million and in 2016 paid an additional HK$2.2 billion to the government for the change of land use rights to develop a 330,000 sq ft office building. The building, 18 King Wah Road, was sold to mainland Chinese interests in January 2018 for HK$9.95 billion.

In recent years, Sonny Li Mow-ming (李茂銘), Ho Kwok-kwong and Ho Kwok-ying (何國英) are listed as directors of Asia Provisions, which has sales of over US$16 million (Hoovers) and operates a central warehousing system with an area of 58,000 square feet (17600 cubic meters of cold storage and 25500 cubic meters of warehouse) in the first two floors of 44-52 Ta Chuen Ping Street in Kwai Chung and maintains its fleet of red delivery trucks to ensure timely delivery under any condition across HK.

This article was first posted on 8th July 2019.