Y.D. Yao (left) with the head of East Asiatic and his wife at the HK Hilton in 1971 when Allied became the ad agent for East Asiatic handling its brands such as Carlsberg beer (KSEN, 1971-12-25)

Earlier in the group, we have covered APB and Far East Advertising (see article on neon), two pioneers of the HK advertising industry. Founded and run by second generation ad man Yu-dee Yao (hereafter refer to as Y.D. Yao), Allied Advertising Agency was another pioneer which was one of the largest Chinese-owned ad agencies in HK from the late 1950s to the early 1970s counting many multinational brands as clients before being sidelined by the arrival of major American and European ad agencies.

Background and Building of a Business

Allied founder Y.D. Yao was the son of Yao Chun-wei (姚君偉), who co-founded Consolidated National Advertising (聯合廣告公司), one of the “Big Four” advertising firms in old Shanghai (the other three being the American firm Carl Crow, British firm Millington and Chinese firm Chinese Commercial Advertising whose founder went on to start Ling McCann Erickson in HK) with Lewis Yehlung Mason (陸梅僧) and two others. Y.D. attended the Sir Ellis Kadoorie School in Shanghai and graduated from the prestigious Chiao Tung University with a degree in chemistry in 1942 but instead of pursuing a career in engineering, he followed in his father’s footsteps into the world of advertising by founding the Allied Advertising Agency in Hong Kong in 1953 (although as a firm it was not incorporated until 1967)

One of Allied’s early clients in the 1950s was Remington typewriters (the same American firm known for its firearms). (WKYP, 1959-7-12) In the 1960s, Allied secured a number of large accounts including local industrial giants such as HK Soybean Products which was producing Pepsi, Green Spot and Vitasoy and Hong Kong Tobacco, the maker of Good Companion cigarettes and major foreign brands such as the Swiss luxury watch brand Rolex, the American tobacco firm R.J. Reynolds (maker of Winston, Salem and Camel cigarettes), the Japanese electronics brand Sharp and the Japanese personal care products giant Kao (花王, whom it worked with on the naming sponsorship of TVB’s first game show, the Kao Club, which ran from 1967 to 1973).

According to industry veteran Stephen Li (李雪廬,the first advertising sales manager for TVB), Allied’s approach was rather unconventional as international advertising firms typically only represented one brand in each industry to avoid conflict of interest while Allied took on multiple clients in one category and while international firms charged one standard rate, Allied charged different rates based on Yao’s discretion. In 1965, Allied made headlines when someone forged a check and withdrew HK$20000 (a sizeable sum at the time) from Allied’s bank account at the Huachiao Commercial Bank. (WKYP, 1965-2-7)

In 1971, Allied became the advertising agent for the Danish trading firm of East Asiatic Co Ltd (founded in 1897, HK branch opened in 1934), which represented Carlsberg beer (from Denmark), Bell’s whisky (from the UK) and Plumrose canned meat (from Chicago) in HK.

In June 1972, Allied relocated to office space at 135 King’s Road which was three times larger than its previous space at the Man Yee Building in Central and boasted itself as the largest and fastest growing Chinese-owned advertising agency in HK with revenues of over HK$10 million. (KSEN, 1972-6-18) The next month, the American trading firm Muller & Phipps appointed Allied as the advertising agent for the Maidenform brand of intimate wear.

According to Stephen Li, Allied’s operations were very bare bone despite the fact that it had a large number of large clients across multiple media. Its staff count never exceeded 20 which was comprised of a few client account executives and did not have a creative department as it relied on ad designs supplied by its foreign clients from their overseas campaigns although it had a small design studio which could handle small fixes. In 1973, Allied promoted Howard Digby-Johns (莊浩華), a British accountant who joined the year before, to head of client relations. The news release also mentioned the launch of a new market research service to assist clients in launching new products and listed four service sector clients – Orient Leasing, Citibank, accounting firm Lowe Bingham (now PWC) and car dealer HK Garage covered by Digby-Johns which were outside of Allied’s usual client base of consumer products firms. (KSDN, 1973-2-23)

As a pioneer in the HK advertising industry, Y.D. Yao was very involved in the formation of industry groups and the promotion and personnel development of the industry. In 1968, Yao was elected chairman of the HK Chinese Newspaper Advertising Canvassers Association (中文報廣告員聯誼會) (KSEN, 1968-4-21).  In 1970, Yao together with Wong Wang-kwong (黄宏光) of Far East Advertising and Charlie Ling (林秉森) of Ling McCann Erickson and others formed the HK Chinese Commercial Advertising Association (華資廣告業商會,HKCCAA) and Yao was appointed supervisor of the group and later elected first vice chairman in 1972.

In 1971, Yao attended an international advertising conference in Lisbon where he was the only Chinese delegate from HK and visited other European cities such as London, Zurich, Frankfurt and Rome for 2 weeks. (KSDN, 1971-6-16) In 1972, he was elected vice president of the HK chapter of the International Advertising Association. 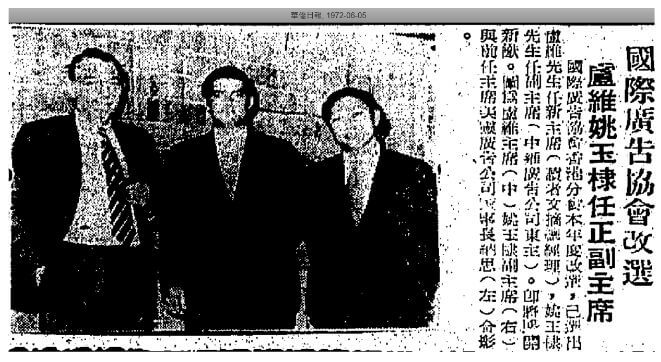 Y.D. Yao married Elizabeth Flora Millar in 1955 and outside of the advertising business was elected Vice president of HK Emotion and Health Association (健康情緒學會) in 1969 (WKYP, 1969-4-20) and chairman of the Kadoorie School Alumni Association (育才同學會) in 1975.

As of 1980, Allied was still in business and its address was listed as 24 Electric Road in North Point (Asian Press and Media Directory). According to the memoir of Stephen Li, Allied was not able to keep up with the competition and eventually went out of business, with its staff who were owed wages took out the office furniture and equipment and left them on the streets. As a firm, Allied was dissolved in 1987. 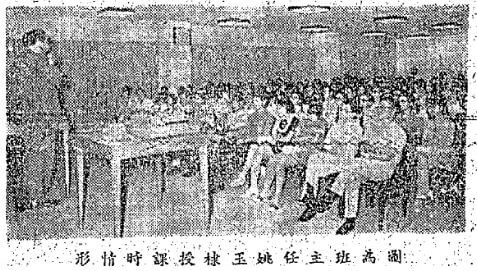 Y.D. Yao teaching one of the advertising classes offered by the HK Chinese Commercial Advertising Association in 1970 (KSEN, 1970-7-5)

This article was first posted on 30th December 2019.