York Lo: From Dodwell Motors and Gilman Motors to Metro-Dodwell and MD Motors 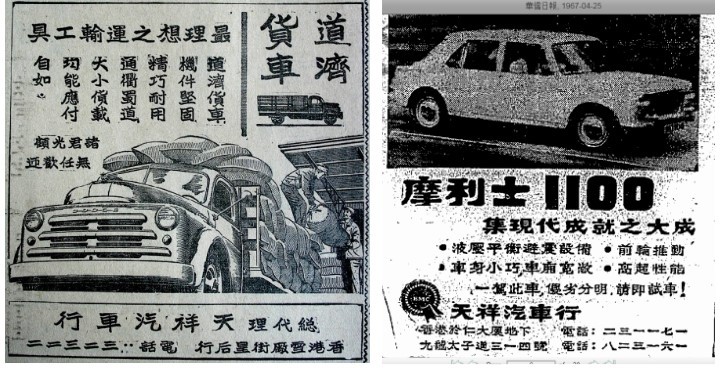 Dodwell Motors started out as a department of the British trading firm Dodwell & Co (see separate article for full history) when the firm won the agency for British auto maker Morris Motors and Morris Commercial in 1929.  For a time, the business proved unprofitable but following the acquisition of the Chrysler agency for their Dodge cars and trucks in 1937, business started to take off and orders were secured from the Chinese Government. In 1946, Dodwell Motors was formally incorporated as a separate company.

In 1949, Dodwell Motors was listed as the agent of Dodge cars, trucks and spare parts and the following from Nuffield Exports Ltd – Morris cars and trucks, Wolseley cars, MG cars, Riley cars and spare parts. (Directory of HK, Canton and Macao) The firm had service stations at 5 and 7 Russell Street managed by L.A. Benn and Oak Street in Tai Kok Tsui in Kowloon. The four directors of the firm at the time were M.D. Cooper, E.R. Hill, B.K. Valentine and the Chinese comprador U Sze-wing with the American Cooper (who hired Stanley Kwan, later known as the father of the Hang Seng Index, as) leading the firm as general manager. U Sze-wing (余仕榮,1887-1960) was a native of Toishan and a graduate of Queen’s College in HK who joined Dodwell as comprador in 1916 and promoted to managing director in 1947. He had served as director of Tung Wah, Po Leung Kuk, the Chinese Club and Lingnan College and a director of China Merchants and HK Yaumatei Ferry. His son Peter U Man-foo (余萬夫) succeeded his father as Chinese manager of Dodwell in 1956 and served as director of Dodwell Motors and its successor MD Motors (and other affiliates such as Inchcape Pacific and Dodwell Travel) from the 1960s into the 1980s. (HK $ Directory, 1963, 1987). Peter’s son U Hoi-sang (余凱生), a neurologist in California is married to Vivien Eu (余瑋瑩), the only child of Edward Eu, proprietor of GM dealer China International Motors (see article). 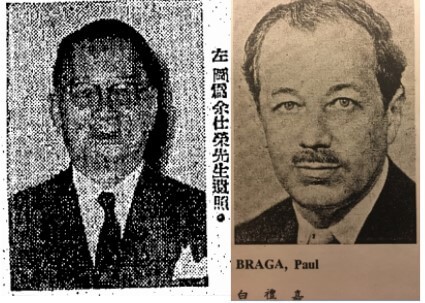 In 1954, Paul Braga (1910-1989) became the managing director of Dodwell Motors and ran the firm until his retirement in June 1970. Braga was the son of the prominent Portugese printer and Legislative Councilor Jose Pedro Braga and instead of joining the family printing business, was inspired by the cars in the Alex Ross dealership near his father’s printing office and pursued a career in autos. He started out working as a Ford car salesperson for Wallace Harper (see article) before starting his own firm in 1931 which became the agent for S.S. Cars (later renamed Jaguar) and Overseas Cars from the UK. In 1936, he joined Gilman & Co as head of its motor department which had the pre-war agency of Chrysler and in 1945, acted as the military liaison with Chrysler for 35,000 Dodge trucks in Burma. After spending two years in Shanghai (1946-48) as US representative of Sincere Mercantile, he returned to HK to join Dodwell Motors as sales manager.  Under the leadership of Braga, Dodwell Motors remained one of the largest auto dealers in HK in the 1950s and 1960s through its distribution of Morris and Dodge vehicles and from 1963-1968, cars made by Morris’ parent company British Motors Corporation (including Austin which was represented by Metro Cars) had 37% share of all vehicles sold in Hong Kong.  Aside from Dodwell Motors, Braga was director of Hire Cars Ltd, the HK licensee of Hertz rental cars from 1961 and developed a 6-apartment building in 59-61 Bisney Road in 1960 with his brother Tony. He was a noted collector of Chinese snuff bottles and relocated to San Francisco after his retirement.

In January 1968, Dodwell Motors opened the first commercial vehicle showroom in Hong Kong in Mongkok near Sai Yeung Choi Street and Nullah Lane featuring Morris vans and minibus.  (WKYP, 1968-1-18) In November of the same year, British Motors shipped its 200,000th export vehicle – a white Morris 1300 – to Dodwell Motors in Hong Kong and one of its 95000 employees was picked by computer to go to HK to present the new car to its buyer. At the time, Dodwell was selling about 1000 Morris 1100 and Morris 1300 vehicles in HK per year.  (WKYP, 1968-11-27)

Although Gilman Motors as a company was not incorporated until 1969, the auto business of British trading firm Gilman & Co (which traced its history back to Canton in 1840) doing business as “Gilman Motors” goes back to the 1930s. In 1932, it was already listed as representative of Hillman automobiles and was also selling used cars out of Cameron Road in Kowloon in 1938. It also appeared to have operated a gas station in partnership with Caltex in Wanchai starting in the 1930s based on old pictures and articles. In 1941, Gilman’s auto department was listed as distributor of cars made by the Rootes Group in the UK including Hillman, Humber and Sunbeam and the American brands Chrysler and Plymouth (HK Sunday Herald, 1941-5-25) As discussed above, it was managed by Paul Braga from 1936 to 1941 before the Japanese occupation. 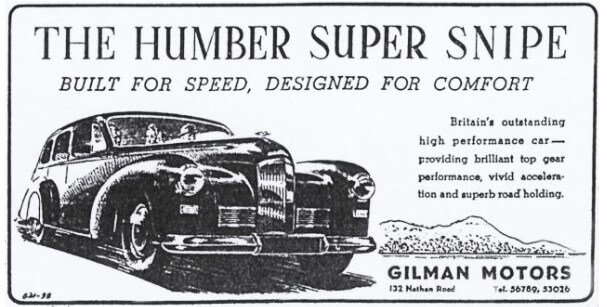 After the War, Gilman Motors had its showroom in Kowloon at 132 Nathan Road and the firm continued to expand as the distributor of Rootes and Chrysler vehicles and added the luxury brands of Jaguar and Rolls Royce.

In 1970, Gilman Motors received the biggest single export order for Silver Shadow cars ever (eight) received by Rolls-Royce Ltd. placed by the Hongkong and Shanghai Hotels for the use of guests of the Peninsula Hotel. This began over half a century of partnership between the Peninsula Hotel and Rolls Royce. 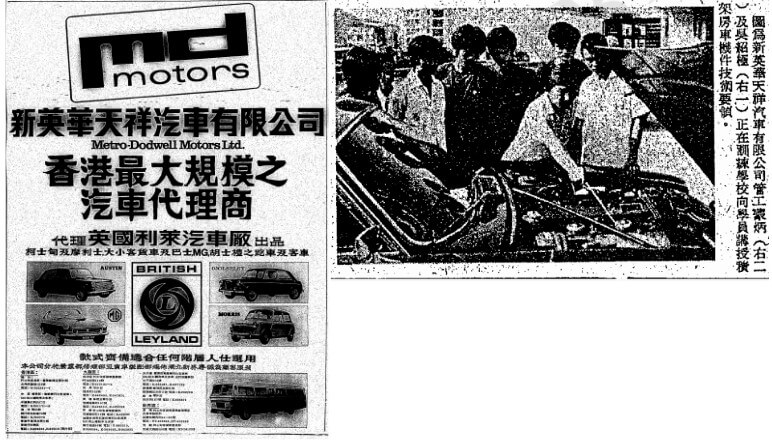 Left: Metro-Dodwell’s ad in 1970 touting itself as the largest auto dealer in Hong Kong as the exclusive distributor of all vehicles manufactured by British Leyland (WKYP, 1970-11-1); Right: Metro-Dodwell mechanics showing students the inner workings of a Rolls Royce at the driving school ran by the firm in Aberdeen in 1975 (KSEN, 1975-8-26)

In the late 1960s, the three main dealers of British automobiles in HK came under the control of the Inchcape Group, best known for the shipping firm of Mackinnon Mackenzie before its move into the auto distribution business (which has been its sole focus since 1999). The sequence of corporate events began with Borneo Co Ltd of Malaya buying Metro Cars in 1966 and Inchcape buying Borneo in 1967. In 1968, the British brands such as Austin, Morris, Jaguar, MG etc represented by the three firms were being consolidated into British Leyland back in the UK, providing a catalyst for the dealers to merge.  In 1969, Inchcape bought Gilman & Co and in September 1970, Inchcape bought Dodwell Motors from Dodwell & Co for HK$38 million and merged it with Metro Cars to form Metro-Dodwell (Inchcape ultimately gobbled up Dodwell & Co in 1972). The next month, Metro-Dodwell went public on the HK Stock Exchange. Alan Dingle from Metro Cars became the first managing director of Metro-Dodwell.

In September 1971, the first Range Rover (which was launched the year before) arrived in Hong Kong and was unveiled at a reception given by the British Trade Commission in co-operation with Metro-Dodwell, its local distributor. (Trade and Industry, 1971) Over time, Metro-Dodwell had supplied many Range Rovers and Land Rovers to the HK Police and the HK government.

For the fiscal year ending December 1972, Metro-Dodwell recorded profits of $9.8 million, a jump from $8.9 million in the prior year. (WKYP, 1973-5-2) In 1973, Metro-Dodwell formed Metway Finance, a joint venture with HSBC subsidiary Wayfoong Finance to provide hire purchase facilities for local sales of British Leyland and Rolls Royce vehicles in HK.

By 1974, Metro-Dodwell had 16 showrooms across HK, Kowloon and New Territories and in May of that year, the firm expanded its showroom on King’s Road in North Point for distribution of Austin, Morris and MG automobiles while shutting down its showroom on Leighton Road. (KSDN, 1974-5-29)

In 1975, Christopher James Blake (C.J. Blake or Chris Blake) became the managing director of Metro-Dodwell, a position he maintained for the next two decades. Born in the UK in 1940, he joined Metro-Dodwell as sales manager in 1971 and was promoted to sales director in 1974. (HK Who’s Who, 1984)

In 1976, Metro-Dodwell acquired the Mazda distributor in HK – Fidelity Motors (發達汽車) and windsurfer manufacturer Neil Pryde (香港快利有限公司, founded in 1970, see article) and as a result was renamed Inchcape Enterprises (英之傑企業) while MD Motors was incorporated to continue the distribution of Jaguar, Rolls Royce, Daimler, Rover and Leyland vehicles (the highly successful Toyota distribution business carried out by affiliate Crown Motors is outside of this and to be covered). Profits jumped from HK$3.5 million in 1975 to $7.7 million in 1976 but dropped to $7.3 million in 1977 (WKYP, 1977-4-27) 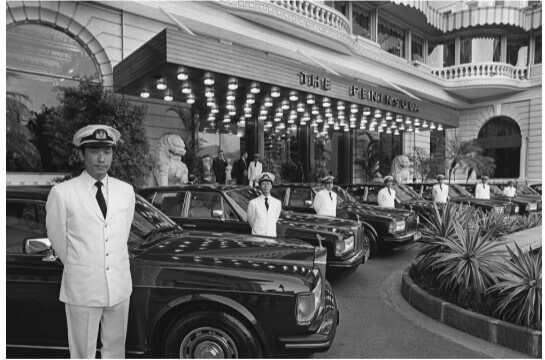 The early 1980s was challenging for Inchcape Enterprises during which it saw its profits plunging from $23.8 million in 1980 to $13 million in 1982 to $2 million on sales of HK$281 million in 1983, largely attributable to losses at MD Motors due to slowdown in sales triggered by the confidence crisis while the lower end Mazda business did well. (Business Times, 1984-9-28, KSDN, 1984-4-16). The firm sold its interest in property development in Tsuen Wan (the site of Metro Cars’ Tsuen Wan site which was re-developed into Shields) in 1984 and sold Neil Pryde to Shriro Group in 1985 to refocus on autos. In 1986, Inchcape Enterprises was renamed Road Holdings (萊龍集團) and was delisted in 1988. In 1987, M D Motors received a HK$12 million from the Peninsula for a new fleet of Rolls Royce as shown in the picture above.

RTHK interviews of Paul Braga in 1970 about his career in auto dealing:

This article was first posted on 15th November 2019.