Earlier on the website, several articles were written about paint manufacturers. Another big business which emerged out of the need to cover the walls in the post-War housing boom in HK is wallpaper, which began to gain popularity in the 1960s. As there was no domestic production of wallpaper in HK, the business was primarily an import business and was dominated by several Shanghainese firms such as Koo Sun Kee, Coda and Oriental while Sunray and Waly emerged in the 1970s and also expanded into mainland China in the 1980s. Some of these firms expanded into wallpaper production in Taiwan and the mainland in the 1970s and 1980s and below are their profiles: 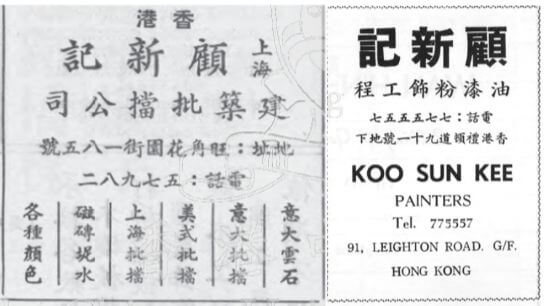 Koo Sun Kee was founded by Koo Sun-sai (顧新世), a native of Ningpo who started his career in Shanghai but moved to HK after 1949. Like Y.L. Nie of Shanghai Yaik Sang Construction (See Shanghainese Builders article series, Part I), the firm specialized in painting in its early years as shown in the two ads from the 1950s shown above. In the early 1950s the firm was operating out of 185 Shanghai Street in Mongkok but by 1958 it was operating out of the ground floor of 91 Leighton Road in Causeway Bay. The firm remained in Causeway Bay with its address listed in 1965 as 91 Leighton Road (Chinese General Chamber of Commerce Membership Directory), 35B Lee Garden on Hysan Avenue in 1969 (AA’s Far East Businessman’s Directory) and 10 Yun Ping Road in 1991 (Business Directory of Hong Kong). In addition, Koo Sun Kee Construction operated out of 185 Fa Yuen Street in Mongkok by Koo Sun-chuen (likely a brother of Koo Sun-sai) in 1969.

Over time, the firm’s focus shifted towards wallpaper and other products such as draperies and furniture fabrics and imported top of the line wallpaper from the US, Europe and Japan and participated in global industry trade shows in New York, Frankfurt and Paris. Aside from private residences, its clients included hotels, offices and restaurants and by the late 1970s and early 1980s the firm was growing at 20% per year thanks to the construction boom at the time and widespread adoption of wallpaper which by 1977 was a HK$19.8 million a year business or total import of 1172 tons per year (WKYP, 1978-12-13). From wallpapers, Koo Sun Kee expanded into distribution and installation of other products through subsidiary Maytone Limited (美通工程, incorporated in 1976 and dissolved in 2002) which was the agent for central vacuum system, Waste King garbage disposer, Fuller O’Brien paints (acquired by ICI in 1995) and metal fixtures such as faucets and door handles.

By the 1970s, Koo Sun-sai was joined at Koo Sun Kee by his sons – K.H. Koo (顧擴海) and K.C. Koo (顧擴洲) who had studied interior design in France. In 1978, Koo Sun Kee opened its Kowloon branch at 61-63 Kimberley Road with the interior design of the store designed by K.C. Koo. 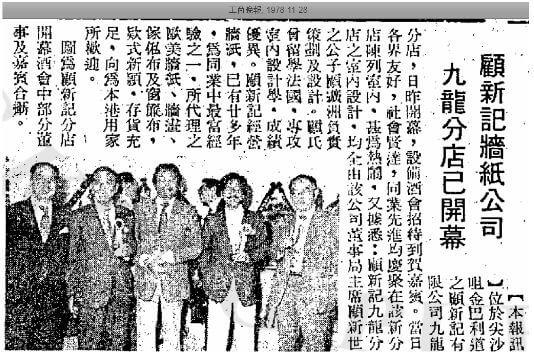 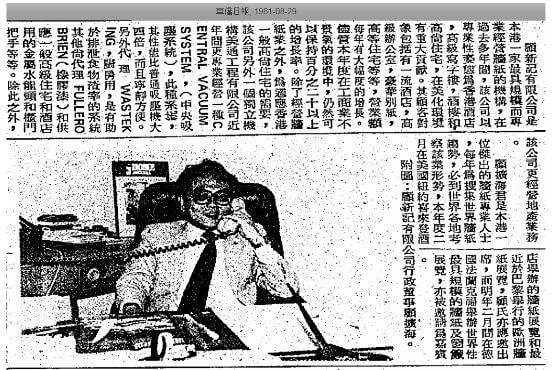 Koo Sun-sai died in 1994 in New South Wales, Australia where he is buried in the Macquarie Cemetery in Ryde City. As a firm, Koo Sun Kee Ltd was incorporated in 1976 and dissolved in 1999.

Coda & Co was founded in 1966 by Yang-hao Tong (湯養浩, 1906-1988, hereafter referred to as “Y.H.”), a native of Nanhui in Shanghai. His father Tong Kai-mei (湯介眉) operated a small bookstore before becoming a Buddhist monk in his 40s. Before 1949, Y.H. was already an established player in the paper business in the mainland and had a sizeable printing factory in Nanking. In 1952, Y.H. brought his family to Hong Kong. Originally Coda specialized in the wholesale distribution of draperies and furniture fabric before becoming the agent of six large wallpaper manufacturers in HK including Imperial Wallpaper Mill from the US whose product is shown in the article above. By 1970, Coda had become a leading firm in the industry, its main store the ground floor of the King’s Theatre at 58-60 Queen’s Road Central in Central with branches at 66-70 Nathan Road (where the Golden Crown restaurant was located) in Tsim Sha Tsui, and Empire Court at 2-4 Hysan Avenue in Causeway Bay (developed in 1958 by Henry Fok, tallest building in HK between 1958-1962). Another branch was later added on D’Aguilar Street in Central.

Left: Coda on the ground floor of Golden Crown Court (to the left of Kung Brothers); Right: Coda next to Wimpy Burger on D’Aguilar Street

Y.H. had 3 sons and 1 daughter and his second son David Tong Cun-lin (湯君年, 1949-2004) joined the family business at the age of 18 in the late 1960s. In the early 1970s, David headed to Taiwan where he started his own importer and manufacturer of draperies under the Tomson brand.  His business ventures eventually became the Tomson Group, a leading real estate developer in Taiwan and Shanghai (particularly in Pudong where it was an early pioneer in 1992). In 1979, David married the famous Taiwanese martial arts actress Hsu Feng (徐楓) and in the 1980s returned to HK where he acquired control of a number of listed companies. Hsu succeeded David as head of the Tomson group after his death in 2004 and is also known for her involvement in the movie business as a producer for acclaimed films such as Farewell My Concubine.

As a firm, Coda Wallpaper Ltd was incorporated in 1977 and dissolved in 2000. 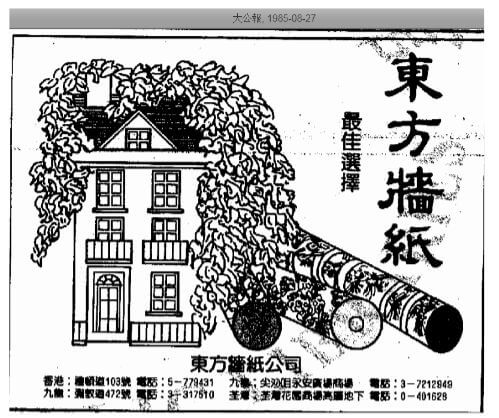 Oriental Industrial Co was a leading player in the HK wallpaper market in the 1970s and 1980s. The firm was founded and led by Thomas Shuen Tak-suen (1938-). A lawsuit filed by Shen Dong-sung in 1987 claiming to be an equal partner in the firm with Shuen and Tsang Kai-sum and Tsang Kai-tong revealed more details about its origins but unfortunately the case details which can be found in the link provided below is currently not available. Allegedly it was Shen who had worked as a traffic officer for Jardines Airways and duty officer at Kai Tak airport who came up with the concept with importing foreign wallpaper after visiting homes in England. Oriental itself was never incorporated but a registered company by the name of Hop Kee Wo Enterprises (合記和企業, incorporated in 1971, dissolved in 1992) was part of the business operations.

According to the 1985 ad shown above, Oriental had four branches in HK in 1985 – one in HK island include 103 Leighton Road in Causeway Bay, two in Kowloon: Wing On Plaza in Tsim Sha Tsui East and 472 Nathan Road and one in  the New Territories – Tsuen Wan Garden shopping arcade. The firm also had a sister company (東方窗簾公司) specializing in draperies which became the exclusive distributor of a Dutch brand of window blinds in 1981 (WKUP, 1981-12-3)

Today Oriental is no longer active its proprietor Tom Shuen had relocated to the US where he has been the president and co-owner of San Francisco-based Winfield Design Associates (named after its founder David Winfield Willson, a designer who founded the firm in 1953), the developer and manufacturer of unique metallic wallpaper used in major hotels around the world including several large ones in Hong Kong and the Fairmont Hotel in San Francisco since the 1980s. The wallpaper plant in San Francisco was re-developed into an apartment complex in 2005.

Founded in HK as Sunray Trading Co (新勵洋行) in 1970 by S.C. Wong (王新之), Sunray Wallcoverings remains a leader in the wallpaper industry after close to half a century in business and was a pioneer in the distribution and manufacturing of wallpaper in China. A native of Shandong, Wong’s father S.H. Wong (王申亨, 1918-1981) was a law graduate of Soochow University and made his fortune in Macau where he was a director of the Yat Yuen Canidrome (逸園賽狗, chaired by Ho Yin – see article on YC Liang and Lynhall Land). S.C.’s uncle Tung Chen-ying was the younger brother of John Tung and an executive at I-Feng Enameling (see articles) while his mother Cheng Ping-sim served as chairperson of Sunray. After high school, S.C. worked for a textile mill for 4 months and dabbled in toy exports before finding his calling with wallpaper at the age of 24 and started Sunray with HK$120,000 borrowed from his father and 2 employees. In the early years Sunray primarily represented German wallpaper brands such as Norta, Hildesia, Marburg and Bammental and rather than the traditional way of taking clients to showrooms, Wong came up with a sample book and within 3-4 years was making millions. 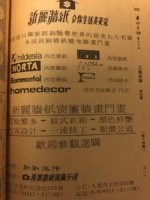 To reduce its dependence on imports, Sunray expanded into wallpaper production in 1978 through the establishment of Sunray Wall Paper Manufacturing in Taiwan. As the mainland Chinese market opened, Sunray’s production started a factory in Zhuhai in Guangdong province in 1987 and relocated all of its production from Taiwan to Zhuhai the next year. With the help of German expert Clements Ditzel, Sunray developed an “In-line in-register gravure printing and embossing machine” and became the first manufacturer in Asia to produce in-registered vinyl wallcovering in 1989 which helped to revive the declining wallcovering industry in China.

In 1991, Sunray celebrated its 20th anniversary with a special exhibition at the Convention Centre in Wanchai with architect Ho Tao and winners of the Miss Hong Kong pageant that year as guests.

In 1992, Sunray began importing European and American wallpaper into China starting with the Sapphire brand manufactured by Crown Wallpapers (one of the oldest wallpaper brands founded in 1839) in the UK. This was followed by other British wallpaper brands such as John Wilman’s Royal Silk and Kingfisher’s Reflections, German brands such as Racsch’s Paradie and Marburg’s Suprofil, Canadian brand Sunworth’s Fun Friends, Italian brand SIRP’s Pictorial Impression and American brands J. Josephson’s Vycon and Guard’s Selections. Branches were established in Shanghai, Qingdao, Shenyang, Hangzhou, Beijing and Nanning.

In 1997, Sunray invested in another wallpaper factory in Zhuhai and imported a new set of world-class production machinery from Europe: – first was an Italian made Schiavi gravure printing machine, which can print up to 18,000m/hour, followed by two English made Emerson & Renwick in-registration embossers, each embosser production capacity can reach up to 6,000m/hour and Emerson & Renwick double-width coating machine with maximum capacity of 20,000 rolls daily. 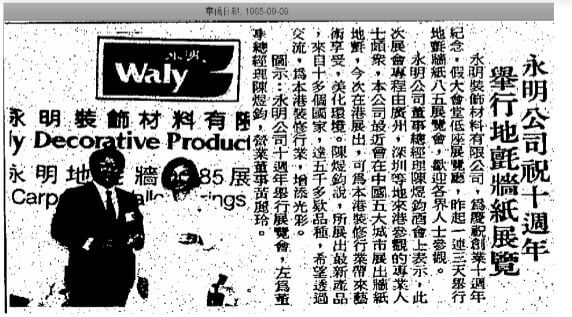 James Chan and sales director Wong Lai-ling at the tenth anniversary reception for Waly in 1985 (WKYP, 1985-9-9)

Waly was probably the highest profile wallpaper company in Hong Kong during the 1980s and 1990s with its TV commercials in heavy rotation on the local channels.

The original firm was known as Waly Decorative Products Ltd (incorporated in 1981, renamed Waly Interior Products Ltd in 1994 and dissolved in 2002). It was led by James Chan Yuk-kwan (陳煜鈞) who was supported by his brothers Chan Yuk-leung (陳煜亮) and Chan Yuk-kar (陳煜嘉) and sales director Wong Lai-ling (王麗玲), who was with the firm from the beginning. After finishing secondary school in HK, James Chan went to Taiwan where he graduated from the Taiwan Normal University and migrated to Thailand where he lived for 7 years, working as an office assistant and dabbled in the paint and ink business. He returned to HK and entered the wallpaper business in 1974 by starting Waly and within 4 years, Waly became one of the major players in the market.

In 1982, Waly opened its showroom at 32 Morrison Hill Road (WKYP, 1982-12-10) and another showroom was added at 127 Lockhart Road in Wanchai. The firm also expanded into the carpet business and entered the Chinese market by exhibiting imported wallpaper products and carpets in five major cities in the mainland in 1985. Waly Décor China was established in 1991 and branch offices were opened in Beijing, Guangzhou, Shantou and Shenzhen. By the early 1990s, Waly was the largest retail wallcovering company in HK and also had sizeable business in the mainland.

In November 1997, the Waly group collapsed during the Asian financial crisis and its four HK outlets were shut down with over 100 staff losing their jobs. New Waly Interior Products (HK) Ltd which was incorporated in 2005 is the current firm operating under the Waly brand and unlike the old Waly has shifted away from the retail market and focus exclusively in the hotel and commercial market for HK, Macau and the mainland market.

This article was first posted on 19th August 2019.