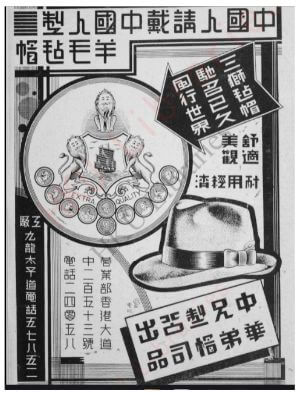 From the 1920s to the 1950s, China Brothers Hat Manufacturing Co was one of the largest hat manufacturers in Hong Kong and China and was allegedly the first local firm to manufacture wool felt hats. The firm, known for its “Three Lions” brand (三獅牌), was founded by and named after three brothers – Hui Lap-sam (許立三, 1888-1944), Hui Pee-kook (許庇穀, 1896-1980) and Hui Ngok (許岳1898-1983), who distinguished themselves as leaders of various industry and community organizations outside of their family business. Their descendants achieved success in different fields ranging from politics to academia and through marriages connected the family to other leading businessmen in HK.

The Hui family came from the Namhoi district in Guangdong and began its involvement in the hat business with the brothers’ father Hui Koon-chi (許貫之) who established Yan Hing Hat Factory (人興帽廠). Lap-sam being the eldest son was the first to join the family business at the age of 13. In 1919 (other source cited 1921), the brothers established China Brothers Hat Manufacturing in Hong Kong.  In 1925, the address for the firm was listed as 119 Keelung Street. (Comacrib Directory)

Thanks to the competitive pricing and high quality of its products, the firm quickly grabbed market share from its foreign competitors and became a major player in the industry. To take the business to the next level in terms of product development, manufacturing operations and market expansion, Hui Ngok traveled extensively in the 1920s, including trips to northern China and Manchuria to investigate wool production, trips to Singapore to open up the Southeast Asian market and tour of Japan in 1923 and of Europe in 1927 during which he visited leading hat factories.

By 1934, the firm was doing over HK$1 million in sales and had over 500 workers. Its factory, which had daily production capacity of 1800 hats, had over 20 different types of machinery (including a Babcock & Wilcox boiler which was worth over HK$20000) and the production process involved over 60 steps. The felt were sourced primarily from Australia but also from northern China. (HK Chinese Factories Survey, 1934) The same year, Hui Lap-sam went abroad to study hat manufacturing and improved his products after he returned.

In 1936, Hui Ngok opened a branch factory of China Bros. in Chapei in Shanghai but sadly the plant was destroyed when the Japanese invaded the next year. Ngok who was at Szechuan at the time returned to Hong Kong where he continued the production of felt hats. (WKYP, 1954-9-15) In the late 1930s and early 1940s, the firm’s factory address was listed as 402 Prince Edward Road in Kowloon (Directory and Chronicle for China, Japan…) while its office address was listed as 253 Queen’s Road Central.

After the Japanese occupied Hong Kong in 1941, China Bros. suspended production. On December 24, 1944, Hui Lap-sam was on board the vessel “Lingnam Maru” en route to neutral Macau when it was sunk by Allied bombers. His body was never recovered and after the War, the High Court declared his death after testimony given by fellow passenger Kwok Lam-po (郭琳褒) of Wing On who did not recall seing him among the rescued and presumed that he was drowned. (WKYP, 1947-9-13; 1950-9-4) Outside of business, Lap-sam served on the boards of the YMCA, Tung Wah Hospital, Chung Sing Benevolent Society, Namhoi Chamber of Commerce and the Chinese Manufacturers Association in HK and also sponsored three schools in his native Namhoi.

After the War, China Bros. resumed production in HK under the leadership of the two surviving brothers – Hui Pee-kook and Hui Ngok and its office address was still listed as 253 Queen’s Road Central while the factory was still in Prince Edward Road.

In 1953, Hui Ngok led a delegation of 85 HK industrialists to Singapore and during which he acquired 80000 sq ft of land on Alexandra Road with plans to open a large hat and canvas factory with outputs earmarked for the Singapore/Malaysia and Indonesian market but for whatever reason, the plans did not appear to have come through. (KSEN, 1953-5-6)

According to an article in the Far Eastern Economic Review in 1955, China Bros competed with 20 other local hat manufacturers in HK at the time which kept the prices low and the firm sourced its wool from both Australia and South Africa and its premises were “fully mechanized and every single process from mixing the wool and noils (the short fibres abstracted when combing wool) and making the cardboard hat boxes” were carried out under one roof.

In the 1940s and 1950s, the Hui family established several other industrial companies such as the garment manufacturer Manwear Manufacturing Co. (文華製衣, factory at 73-75 Hoi Yuen Road in Kwun Tong), the canvas and rubber shoe maker The Willie Co. (偉利公司, founded in 1945) and the chemical producer Universal Chemicals and the next generation of the Hui family also joined the family business. Unfortunately, China Bros Hat Manufacturing and these other businesses have since faded into history.

Outside of the hat business, Hui Pee-kook and Hui Ngok were prominent figures in HK society in the 1950s as the head of the pro-Beijing Chinese General Chamber of Commerce (CGCC) and the Chinese Manufacturers Association (CMA) respectively. Before the war, Pee-kook had served as director of Tung Wah Group of Hospitals in 1940 and Po Leung Kuk in 1941 and after the War, he served as chairman of the Kowloon City Kaifong Welfare Association. During his tenure as CGCC chairman in 1955-56, Pee-kook led a high-profile delegation to visit the mainland which included an audience with Premier Zhou En-lai in Beijing and its current building in Central was also built. Hui Ngok served as chairman of the CMA from 1954-56 but for whatever reason, he and his son Y.C. abruptly resigned from their positions with the Association in 1956 and China Bros. as a firm also withdrew as a member that same year. (WKYP, 1956-4-17) Hui Ngok was also chairman of the Po Leung Kuk from 1957-58 and in his free time was an amateur photographer. (Gang Ao Wen Ren lu, 1957)

Hui Lap-sam was survived by five sons and seven daughters. His eldest son Hui Yin-kan (許賢根), was an executive with Asiatic Petroleum/Shell in HK responsible for petrochemical products and married his HKU schoolmate Vera Lo (羅佩堅, supervisor of Po Kok Primary School), the daughter of Sir Man-kam Lo and granddaughter of Sir Robert Hotung in 1951. Lap-sam’s third son Hui Yin-fat OBE JP (許賢發,1936-2016) was probably the most prominent member of his generation as the long time director of the HK Council of Social Services (1973-2001) and member of the Legislative Council (1985-1998).

Hui Pee-kook died on August 13, 1980 at the St. Teresa Hospital in Kowloon. He was survived by his wife Fung Wai-fong and 5 sons and 3 daughters (his eldest son and second daughter predeceased him). His second son Hui Yin-ying (許賢瑛) was involved in the chemical business as the founder of Universal Chemicals (環球化工廠) and was active in community affairs with his involvement with the Kowloon City Kaifong Welfare Association, Lok Sin Tong and Kowloon City District Council. Yin-ying’s wife Lo Ying-wa (勞影華) is the daughter of prominent Chinese doctor Lo Ying-kwan (勞英群) and niece of Lo Min-nung (勞冕儂), BAT comprador and developer of the Man Yee Building in Central. Pee-kook’s fourth son Hui Yin-cheung (許賢璋) was a teacher and married Fung Man-fong (馮曼芳), the daughter of Fung Wo-yin (馮和燕) of leading cosmetic manufacturer Kwong Sang Hong in 1957 while his fifth son Hui Yin-kee (許賢璣) was a lawyer. (WKYP, 1957-1-3)

Hui Ngok passed away at the HK Baptist Hospital in Kowloon on September 20, 1983 and was survived by six sons and three daughters. (TKP, 1983-9-26) His eldest son Hui Yin-him (許賢謙) married the daughter of metals trader and Wellcome supermarket director Bunnan Tong (唐賓南,to be covered) in 1956. His second son Hui Yin-cheung (許賢昌), who was involved with managing The Willie Co and Manwear, was president of HK Jaycee in 1956-57 and involved with the CMA. His fifth son Hui Yin-fong (許賢晃) married Yip Pui-hang (葉佩珩), the daughter of former HK Chinese Gold & Silver Exchange chairman Yip Siu-ming (葉少銘). Ngok’s eldest daughter Kathleen Hui (許健生, 1925-2010) and her husband Lien-Pei Kao (高聯佩) returned to China after studying at the University of Michigan in 1956 where Kao was an expert in semiconductor at Tsinghua University in Beijing. The couple survived the Cultural Revolution and returned to the US where Kathleen became a leading medical researcher on the impact of acupuncture on the brain before her death. Ngok’s second daughter married Lay Wo-po (雷和博), who was chemistry professor at CUHK from 1964-83 while his third daughter Kin-chuen married T. Wing Wai (韋增榮), a barrister who co-founded the HK Merchants Association of Vancouver in 1968.

The three Hui brothers also has a sister – Dr. Hui Luk-yip (許綠葉), who was a prominent physician and served on the board of the Po Leung Kuk in the 1950s alongside her brother Hui Ngok. Luk-yip graduated from HKU with a MBBS in 1933 and was registered to practice medicine at the Government Civil Hospital in 1934. She married Dr. Woo Kai-fun (胡啟勳, 1909-1977), a Shunde native who after graduation from HKU with a MBBS in 1930 further his studies in London and California and taught in medical schools in the mainland and practiced internal medicine at Kwong Wah and Tung Wah hospitals in HK before his retirement in 1972. (WKYP, 1977-1-7) Their daughter Lena Dawn Woo Ling-kwan (胡令筠) and son in law Kenneth Young (楊綱凱) both taught at Chinese University of Hong Kong. Young, who received his Ph.D. in physics and math from Caltech, was dean of science and pro-vice-chancellor at CUHK and chairman of the HK Research Grants Council.

This article was first posted on 3rd February 2020.