Entrepreneurs from Hong Kong have long played an important role in the electric fan industry globally. The property and investments billionaire Joseph Lau made his first fortune selling ceiling fans to the US and the Middle East with his Union Ngok Kee and Evergo in the late 1970s and early 1980s, which earned him the nickname of “Electric Fan Lau” in the early years. Then there is Bernard Chiu, whose Duracraft was one of the leading brands of electric fans (and other appliances) in the US in the early 1990s before being acquired by Honeywell.

But HK’s entry in the global electric fan market started way back in the 1950s, with three pioneers – Shell, Din Wai and Wing Tat – whose SMC, DEMC and TAT fans put Hong Kong on the map as Hong Kong’s exports of electric fans grew from HK$2.4 million in 1959 to HK$657 million in 1980. The owners of the three firms had served as chairmen or directors of the HK & Kowloon Electric Trade Association (港九電業總會,founded in 1945) and were major players in the development of electrical appliances industry in HK.

Below are profiles of the three firms: 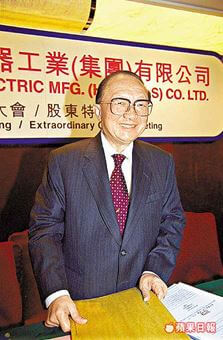 His first business involved trading goods such as rice and he began importing electric fans after the War, a luxury item at the time which only the wealthy families could afford.

Despite his limited education, Yung was an inventor in the mode of Thomas Edison, and sensing a business opportunity, he started Shell to make electric fans under the SMC brand. As Shell’s fans were priced at half of the imported ones, they sold well domestically. In 1955, Shell became the first exporter of ceiling fans from Hong Kong.

Soon demand outpaced supply and in the late 1950s, Yung Yau and his engineers invented machines and mechanical processes which dramatically increased production of fans from 20 fans per day to several hundred per day. 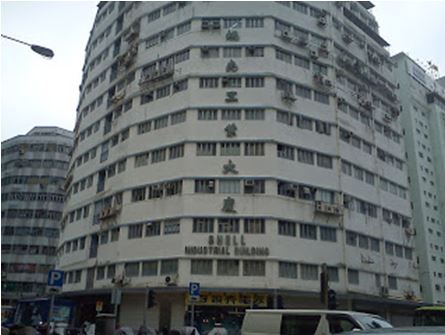 In 1966, the firm built the Shell Industrial Building at 12 Lee Chung Street in Chai Wan. 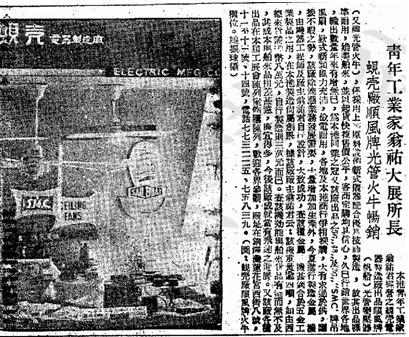 Article about “young industrialist” Yung Yau with a picture of the display of his SMC fans and other electric appliances such as AC/DC adapters in 1958 (Wah Kiu Yat Po, 1958-12-17)

During the 1970s, the energy crisis created huge demand for cost and energy efficient electric fans around the globe and Shell became one of the largest electric fan manufacturers in the world. In 1978, Shell became one of the first HK manufacturers to set up sales office in the US by establishing SMC Marketing in LA to bypass the middlemen and sell directly to the retail chains. In the early 1980s, Shell replaced the British GEC as the primary supplier of fans to the HK government. 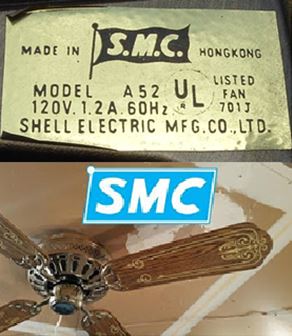 In 1982, Shell produced the first microwave oven manufactured in Hong Kong. (between 1995 and 1998 the firm had also a joint venture with Whirlpool to make microwave oven in Shunde) Two years later in 1984, the firm became a listed company on the HK Stock Exchange. In 1986, Shell’s first joint venture production facility in the mainland was established in Yung’s native village of Shun Tak. Further diversification of the business began in the 1990s, when the firm entered fields such as property and taxi in Guangzhou (both in 1992), steel processing (launched in 1993 in conjunction with Shinsho of Japan and divested in 2004) and optical components (sold for 23 times profit within 2 years to E-TEK Dynamics in 1999).

Outside of Shell, Yung was an active philanthropist, having served as a director of Tung Wah and sponsored the Shun Tak Fraternal Association Yung Yau College in Tin Shui Wai which was founded in 2001. He also served as chairman of the HK & Kowloon Electric Trade Association and Jardines Lookout Residents Association.

By the time of Yung Yau’s death in 2004, Shell was making over 6 million fans per year and employed over 8200 employees. He was succeeded by his eldest son Billy who has shifted the focus of the group towards property development in the mainland in recent years. 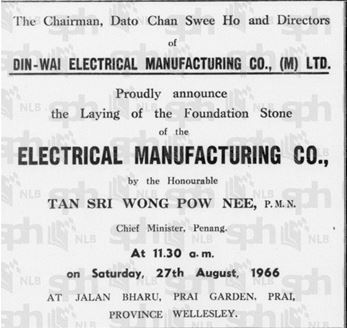 Founded in 1949 (although not incorporated until 1970), Din Wai Electrical Manufacturing (電威電器製造廠) was a leading electric manufacturer and its DEMC brand of fans was popular at home and abroad. The firm is named after its founder Lee King (李敬, 1913-1978) whose alias was Chung-Wai (仲威) and Din being the Chinese word for electric. Raised in Canton, Lee King’s father died early so he had to quit school to support his family by going into business.

He achieved success in Canton early on but had to start all over again in Hong Kong when he arrived in 1949. Due to limited capital, Din Wai started out as a simple workshop in Sham Shui Po but over time the firm grew thanks to its high-quality products.

Additional investors were brought in including two directors of Tung Wah and Po Leung Kuk – Cho Shiu-chung MBE, J.P.(曹紹松),who was chairman of the Mongkok Kaifong Association and managing director of a number of properties companies such as Wai Wah Enterprises (偉華企業, now Rivera Holdings) and Chan Kam-Toi (陳錦臺), a leader in the Chinese retail trade.

During the 1950s, Din Wai’s DEMC fans were flying off the shelves which enabled Din Wai to move into its own Din Wai Industrial Building at 49 Hoi Yuen Road (開源道) in Kwun Tong (since re-developed into APEC Plaza) by the early 1960s. 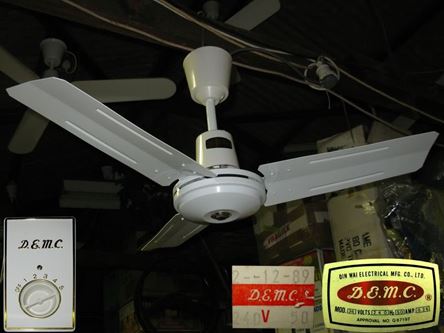 In 1966, Din Wai invested HK$18 million to establish two massive plants in Penang, Malaysia – one to produce electric fans, torchlights and high dryers and the other to produce air conditioners and refrigerators. Dato Chan Swee-ho J.P. (曾瑞豪), a prominent Ipoh industrialist and politician, was Din Wai’s joint venture partner in Malaysia and was appointed chairman of the Din-Wai Electrical Manufacturing Co (Malaysia) Ltd, which commenced operation in 1967 and supplied DEMC fans to the Southeast Asian market.

In the mid-1970s, the electric fan market in the US took off as consumers there tried to find low cost energy solutions during the energy crisis and a Florida businessman named William Wallo, who came across the DEMC fan in his neighbor’s house, became the exclusive distributor of DEMC fans in the US through his company Gulf Coast Fans Ltd. The arrangement was such that Gulf Coast bought from Mid West Electronic of Chicago, the exclusive importer of DEMC fans in the US, which in turn bought from Pax & Co in HK, the exclusive agent handling exports to the US appointed by DEMC.

Business grew steadily over the next 3 years and in 1978, Wallo sold Gulf Coast to Wilmer Barrett. Barrett began to rebrand DEMC brands under the Gulf Coast name and renaming the models Seabreeze and Showboat. The next year, the US ceiling fan market exploded and when Gulf Coast did not get enough fans from Din Wai, it started to source from other firms and modifying the fans resulting in accidents. As a result, the relationships between the four parties went south and ended up with lawsuits in the early 1980s. Today the Gulf Coast brand of fans still exists and is owned by Dan’s Fan City, the largest independent retailer of ceiling fans in the US.

Lee King was supported at Din Wai by his older brother Lee Yee (李意), whose wife Cheung Kwan-wai (張坤維) was the sister of his own wife Cheung King-wai (張敬維). Outside of Din Wai, Lee King was a devout Buddhist and because he left school early, he was a generous supporter of education after he became rich. In March 1978, Lee King died and was survived by his wife, 4 sons (three of whom Tai-kuen 李大權, Tai-ching 李大正 and Tai-yu 李大宇 were working for Din Wai at the time, the youngest Tai-wing 李大永 was still studying in the UK) and a daughter. His widow Cheung King-wai took over as the chief director of the firm and in her spare time was also active in philanthropy, having donated the Christian Family Service Lee Cheung King Wai clinic and served as director of the Miu Fat Buddhist temple.

Over time the Din Wai factory was shut down and in 2003, the Din Wai Industrial Building was sold for HK$30 million and has since been renamed KTA Centre.

This article was first posted on 15th September 2017. 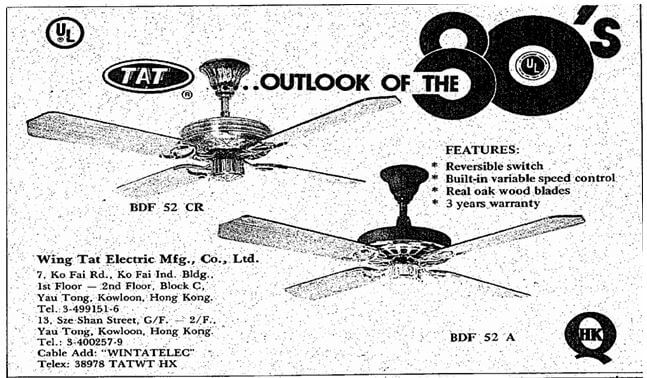 Its founder Kan Man-wai (簡民威) was also the founder of Hop Fat Electric (合發電器行), a distributor and retailer of electrical appliances in HK that was founded in 1947 and operated out of 125-127 Des Voeux Road in Central. Hop Fat was one of the early distributors of the products of Japanese electronics giants Toshiba and Matsushita and its directors included Li Yim-wah (李炎華) and Chan Ching-to (陳靜濤 , 1887-1967), the founder of Wah Mei Electric (one of the oldest electronics retailers in China, see article) who was also a Chinese revolutionary and HK Buddhist community leader.

Starting out with a small plant at 4 Catchick Street in Kennedy Town, Wing Tat’s fans and adapters were at first primarily distributed locally through Hop Fat and Wah Mei which were affiliated with its directors and Chung Yuen Electrical, another pioneering electronics retailer which still operate to this day.

Led by Kan and the firm’s managing director Law Yun-sum (羅潤深), Wing Tat grew by leaps and bounds within less than a decade of its founding. By the mid-1960s, the firm’s TAT brand of electric fans were installed in government buildings and schools and also exported to over 52 markets worldwide, reaching the far corners of the earth.

In 1965, the firm built its own 8 story factory building on 7 Sheung Hei Street in San Po Kong. It was producing 5000 fans per month and growing at the rate of 30 percent per annum. By 1973, the total number of fans produced by Wing Tat exceeded a million and the total number of markets it exported to reached 99.

In 1976, Wing Tat formed Fan Tat Manufacturing (豐達製造廠), a joint venture with Al-Hakbany Group of Saudi Arabia (which also worked with KDK of Japan and Breidert of US) to manufacture fans for the Middle East market under the TAT and KANDO brands with Wing Tat holding 51%, Hakbany holding 40% and individuals holding the remainder. 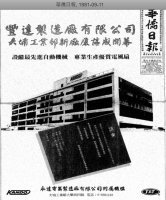 In 1981, Fan Tat became one of the first tenants of the Tai Po Industrial Estate with an investment of HK$50 million and employing 300 workers to produce 2000-5000 fans per day.

In the early 1980s, Wing Tat was operating out of Yau Tong with 150,000 square feet of manufacturing space and the state of the art American and Japanese equipment. It was also manufacturing for Moss Manufacturing, an American firm established in 1977 by David Moss (1941-2004) in Florida which grew to become the world’s largest ceiling fan company by 1982 with annual sales of over US$120 million by importing low cost electric fans from Asia into the US and selling them through a highly successful partnership with the upstart home improvement chain Home Depot. (Golden Fan Electrical, a HK firm founded in the early 1980s by mainland Chinese interest was also a major supplier to Moss).

By the mid-1980s however, 50 percent of US households had ceiling fans in their homes and the market had become saturated with intense price competition between HK and Taiwanese competitors

In 2005, Kan Man-wai, who had served as president of the HK & Kowloon Electric Trade Association president in the 1960s, died.

His son Frederick Kan Shiu-cheong (簡肇昌) ran Wing Tat as its managing director and served as chairman of the publicly listed Climax International from 2001 to 2008.

This article was first posted on 15th September 2017.